Below, you can see a plinth in between the doors, where once a statue of Mary, Mother of Jesus stood. The statue was removed in the Reformation, along with various other more Catholic bits of decor.

If I remember correctly, below is the figure of St Martin (you’ve a Saint who shares your name, brother!), who in the story cut off his cloak to give it to a beggar. But apparently at some point historically, the people didn’t want an unsightly beggar depicted on the front of their minster, so they changed the beggar into a tree stump. So now St Martin is apparently cutting off his cloak… for no good reason!!

And here’s a figure representing temptation. From the front, he’s all good looking charm and friendliness, but behind his back he is full of worms…

Here’s the verger’s house just opposite the minster, where three of the sisters from Delia’s community work, offering prayer for people and various other kinds of outreach to those in need:

We admired some of the older stonework inside the minster. Some of it depicts Bible stories like this piece showing Adam and Eve and the serpent:

But we thought some of the other pieces were of more questionable provenance. Probably medieval fight scenes or from stories that do not necessarily have much to do with the Christian tradition. Although this minster was adapted in the Reformation, they left some of the questionable decor alone.

We enjoyed looking around the older parts of the city and then had lunch in a very nice Turkish restaurant, where I had the obligatory beer. (Not ein Grosses though; moderation in all things!) 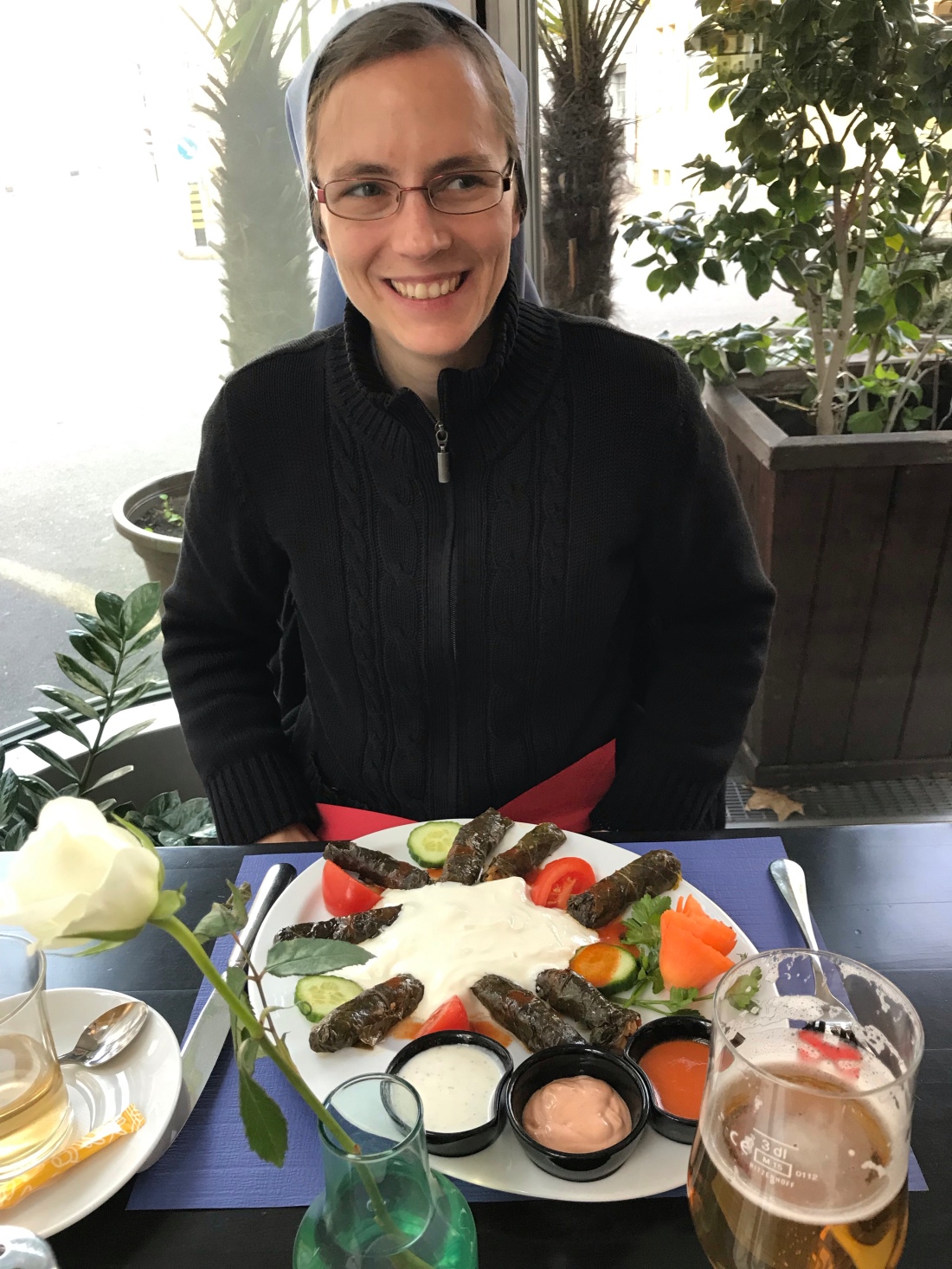 We explored some beautiful courtyards and some of the historical buildings now owned by the university: 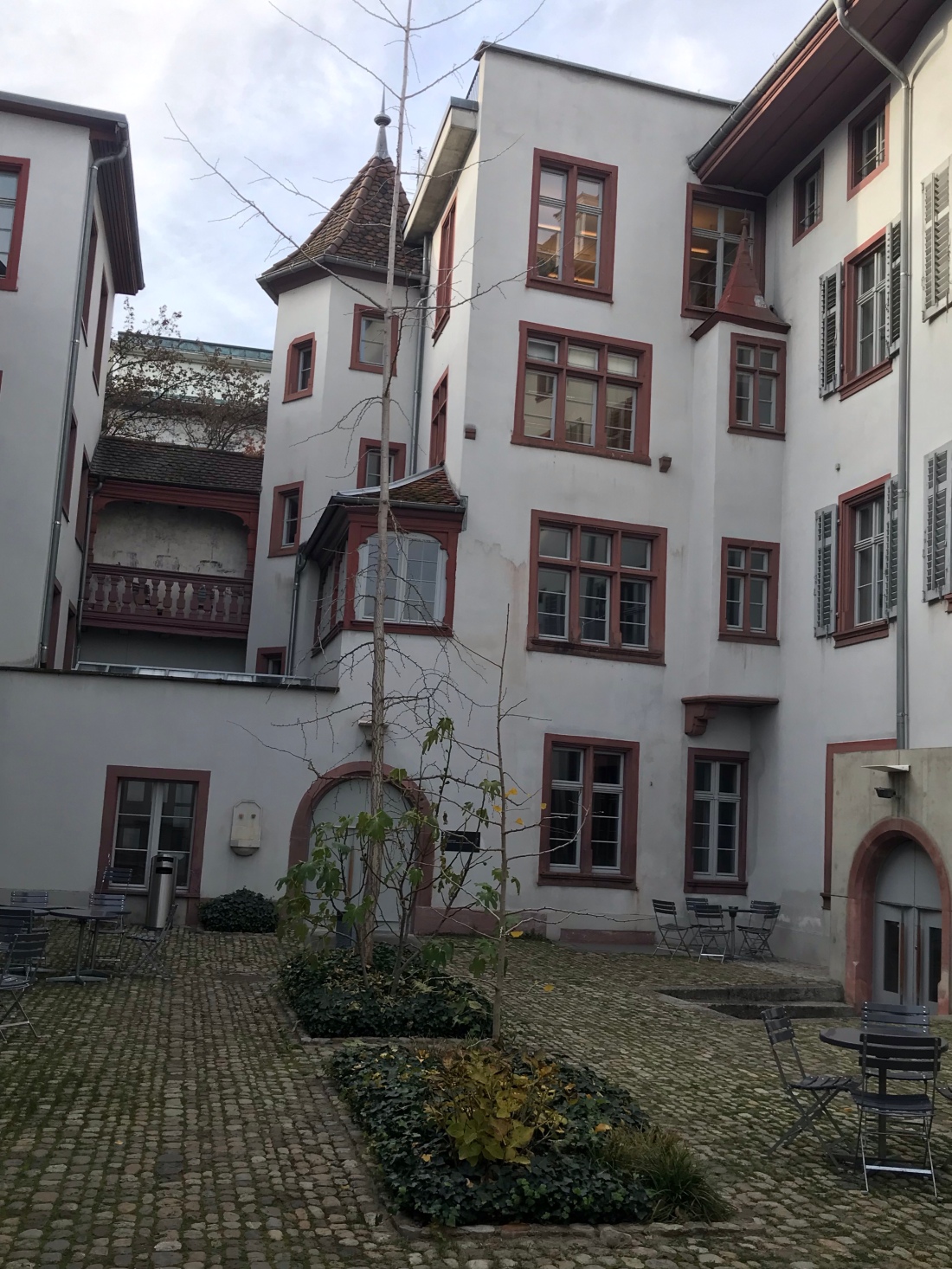 We visited the Jewish Museum, which gave some really interesting insights into the realities of Jewish life in Switzerland at various points of history. The significance and uses of the artefacts on display are explained by various Jewish people (of all ages including a young girl) in the somehow very Jewish video guide as you go around. (The people in the guide are sometimes quite funny and give the impression of always being open to debate, while stating some pretty harsh facts about how Jews have been caricatured and how they were treated at various points in history.) 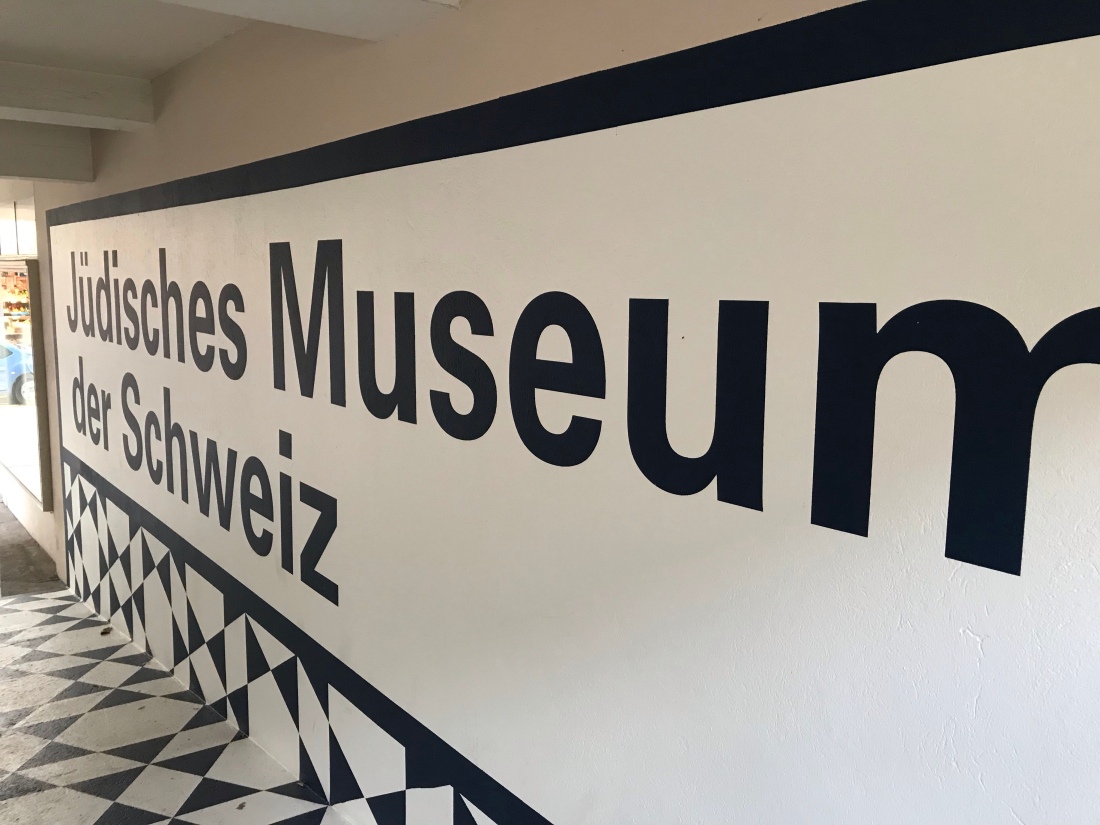 This is part of a tombstone from the Middle Ages. Apparently a lot of Jewish tombstones like it have been discovered under the university buildings in Basel. 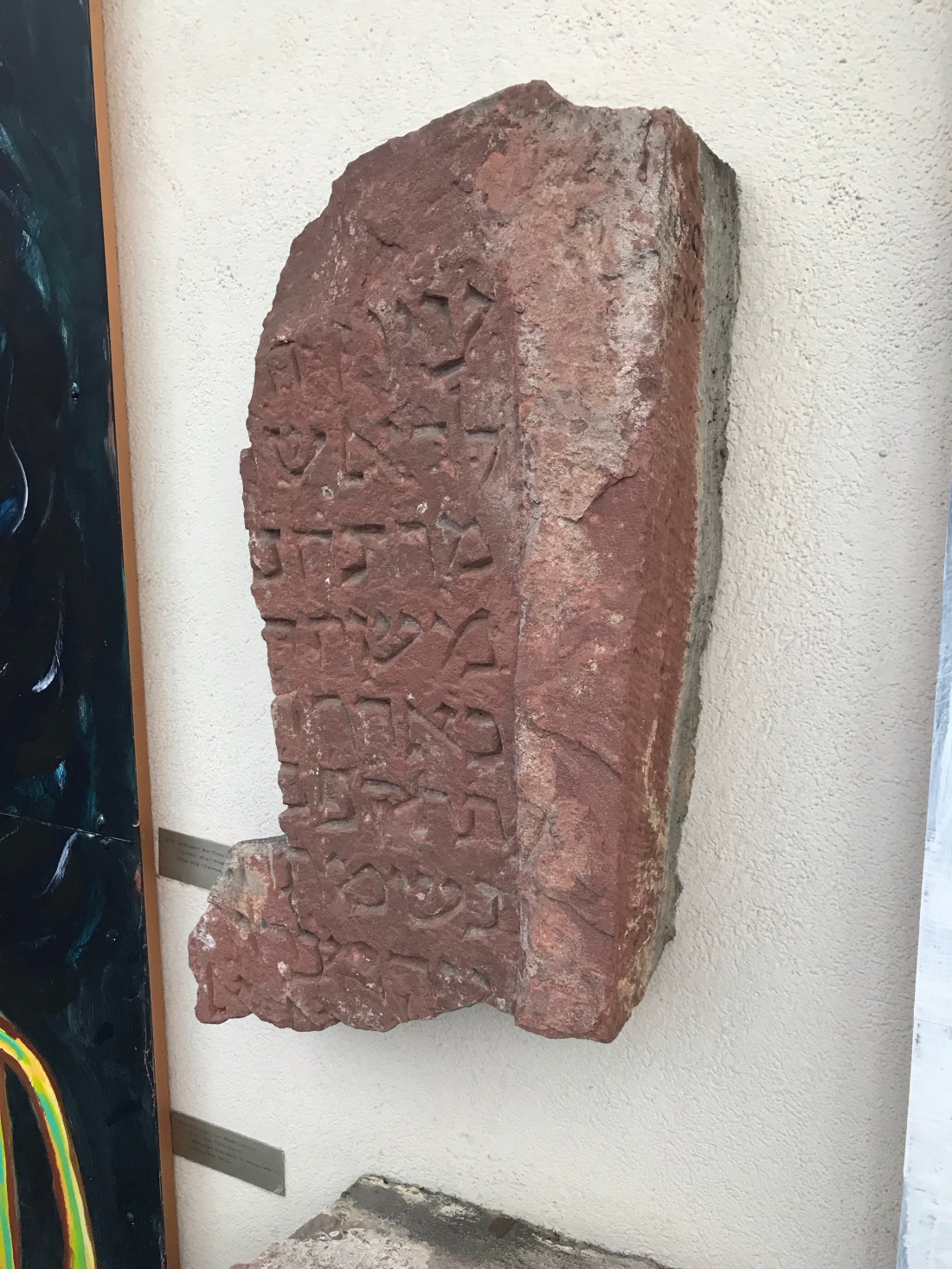 In another church near the main university building, Delia showed me an unusual icon, depicting the trinity as one being with three faces. You can tell this is a Protestant city by the fact that this precious fresco is in a room now used for the storage of tables and chairs etc!

This is the figure with three faces:

The line that extends from God’s mouth ends near Mary’s head in the form of a tiny dove, the sign of the Holy Spirit:

A well preserved historical gate of the city: 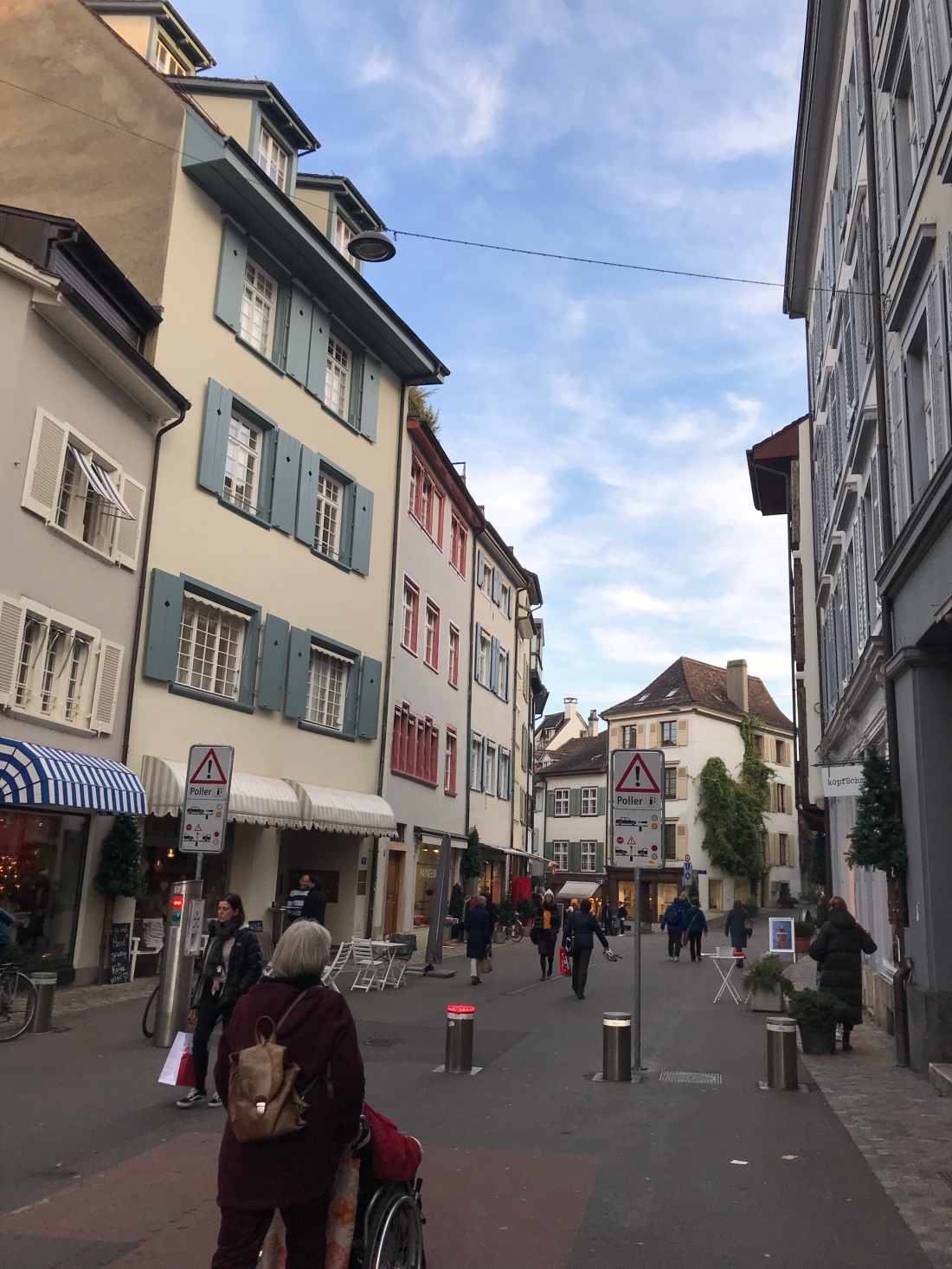 Another view of the splendid Town Hall in the sun, and some other beautiful buildings in the main square:

One thought on “Basel (ii)”