Today, I decided to take the hop on hop off bus tour around the different areas of the city.

I hopped off at Chinatown to have a look around the acclaimed Chinatown Heritage Museum, which is an excellently put together place, offering well researched stories of Chinese people – how and why they came to Singapore in the first place, and what their lives were like in the 1800s and then later in the 20th century too.

Chinese people make up the vast majority of the population in Singapore (over 70%), then Malay people (now under 20% though the Malay people were here before most others, so Malay is actually the national language of Singapore) and then Indian people (under 10%), then people of other ethnicities.

The Chinese people mostly arrived in Singapore from the 1820s onwards (until the First World War, then again after it), having left China in desperation to try and find a better life and a way of earning money to send back home to their poverty stricken families. Quite a lot of people didn’t survive the gruelling voyage to get here. And those who did survive, found that conditions here were not ideal as they’d been led to believe. But they were grafters, who worked incredibly hard in really tough conditions in order to make enough money to survive and then to send some back home as well.

The heritage museum is set up in a series of old shophouses (shops with living quarters at the back and above the shop). They have placed historical artefacts in all the rooms to show what life would’ve been like. There was loads to look at. Here’s just a tiny taste.

The back of the shop where the apprentices did a lot of the leg work, including looking after the shop owner’s children and running errands for his wife, who cooked for everyone: 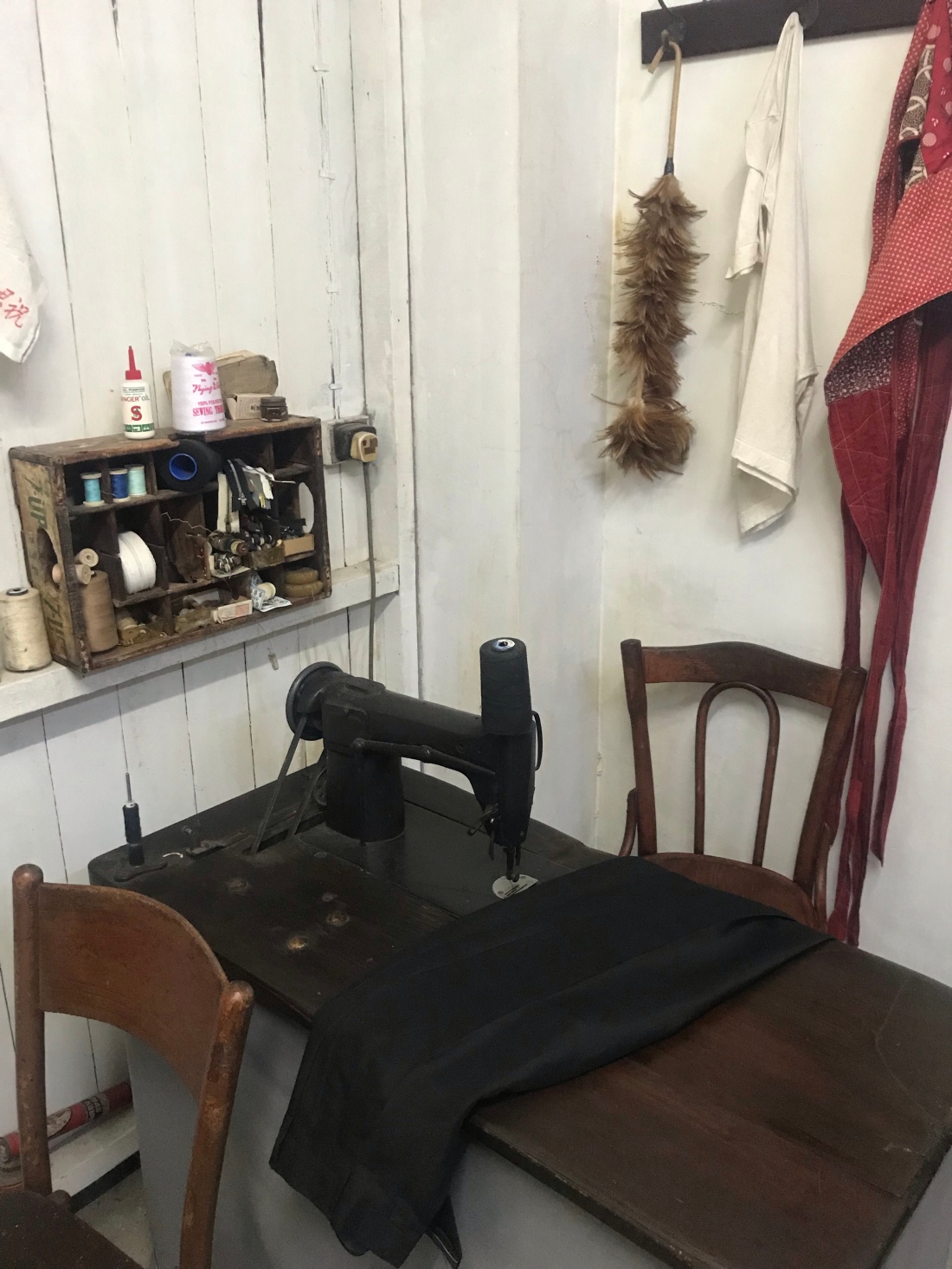 This is the bedroom/living area for the tailor’s apprentices. Probably something like 8 of them slept here and lived here when they weren’t working until the shop or running errands!

This is the room of the master tailor of the shophouse, who rented out all the upstairs rooms too. He and his wife and their children lived in this space. This was the most spacious of all the bedroom/living areas in the entire building!:

And this is the kitchen, where the tailor’s wife cooked meals for her family and also all the apprentices. I think the information said she was probably cooking for about 15 people every day. Apprentices got paid a pittance but their food and lodging was supplied: 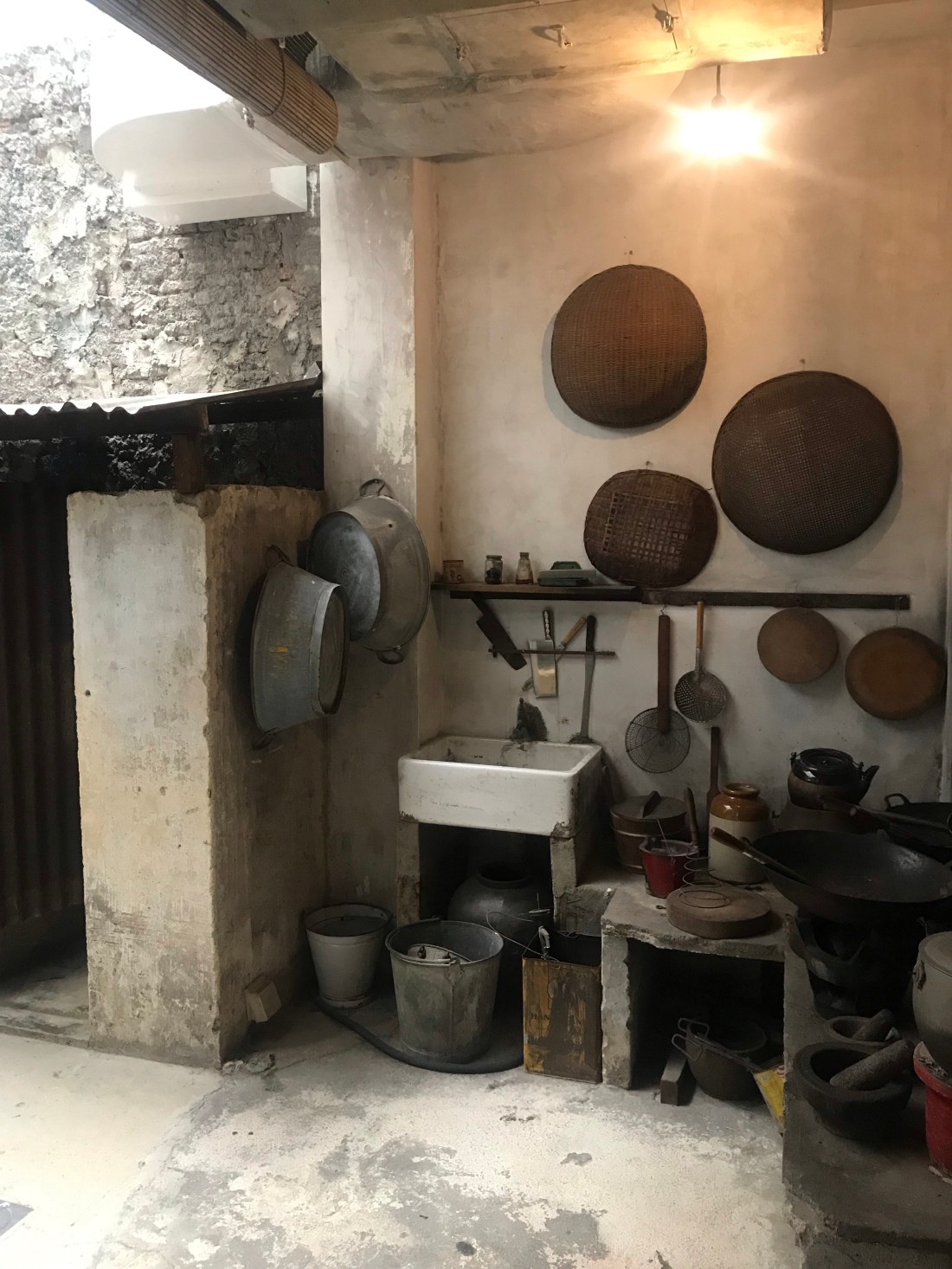 The upstairs of the shophouse demonstrates something called “cubicle living” and was the really shocking part of the whole museum.

The upstairs kitchen and shower and toilet area. Shared by about 40 people altogether. Oh my:

The hawker’s home. She lived here with her husband and two children. She would have got up at something like 4am to prepare all the food she would sell in that tiny kitchen before anyone else was up and about. Then she’d load it up on these two baskets (you can probably see one of them in the picture below) hung off the ends of the bamboo pole along with plates and chopsticks/spoons for people to use while they ate it. There are two pails on either side hung underneath the baskets that she’d fill with water from a public standpipe near where she was selling the food, for washing all the plates so they could be reused. Then she’d shoulder the bamboo pole and cycle to the location where she was selling the food. No wonder a lot of these people suffered with back problems: 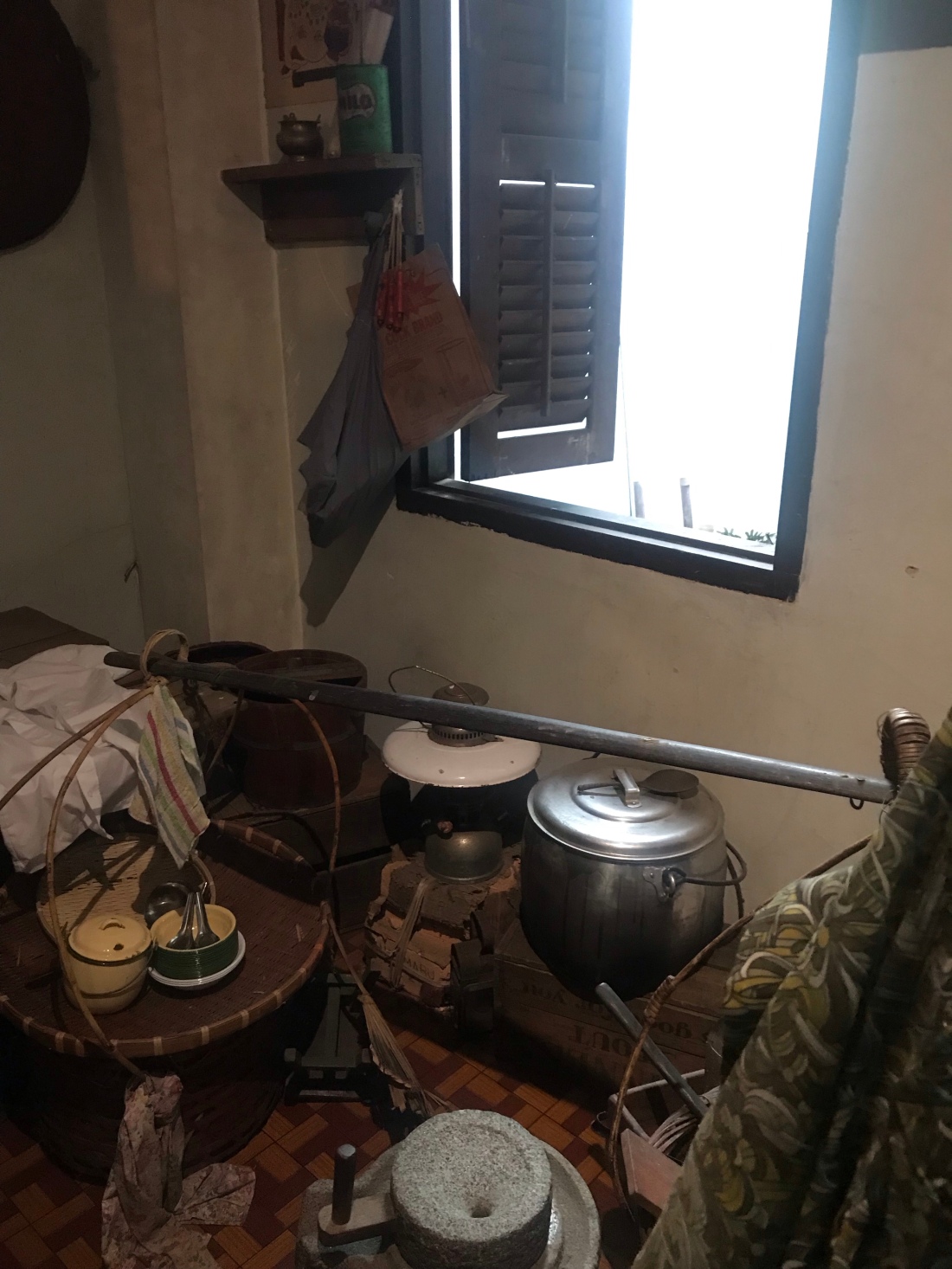 A physician’s home and area to practise medicine. The museum had a series of interviews with one of his daughters, where she described how she and her two siblings and mum and dad all slept on a mat on the floor of this cubicle. She said in those days people were skinny and short so it wasn’t really a problem. Hmmm. This was by far the most spacious of the upstairs cubicles (physicians being relatively well paid even then, although this guy offered free treatment to anyone too poor to be able to afford it). But… how does your dad see patients with three kids and a wife in this space too?? 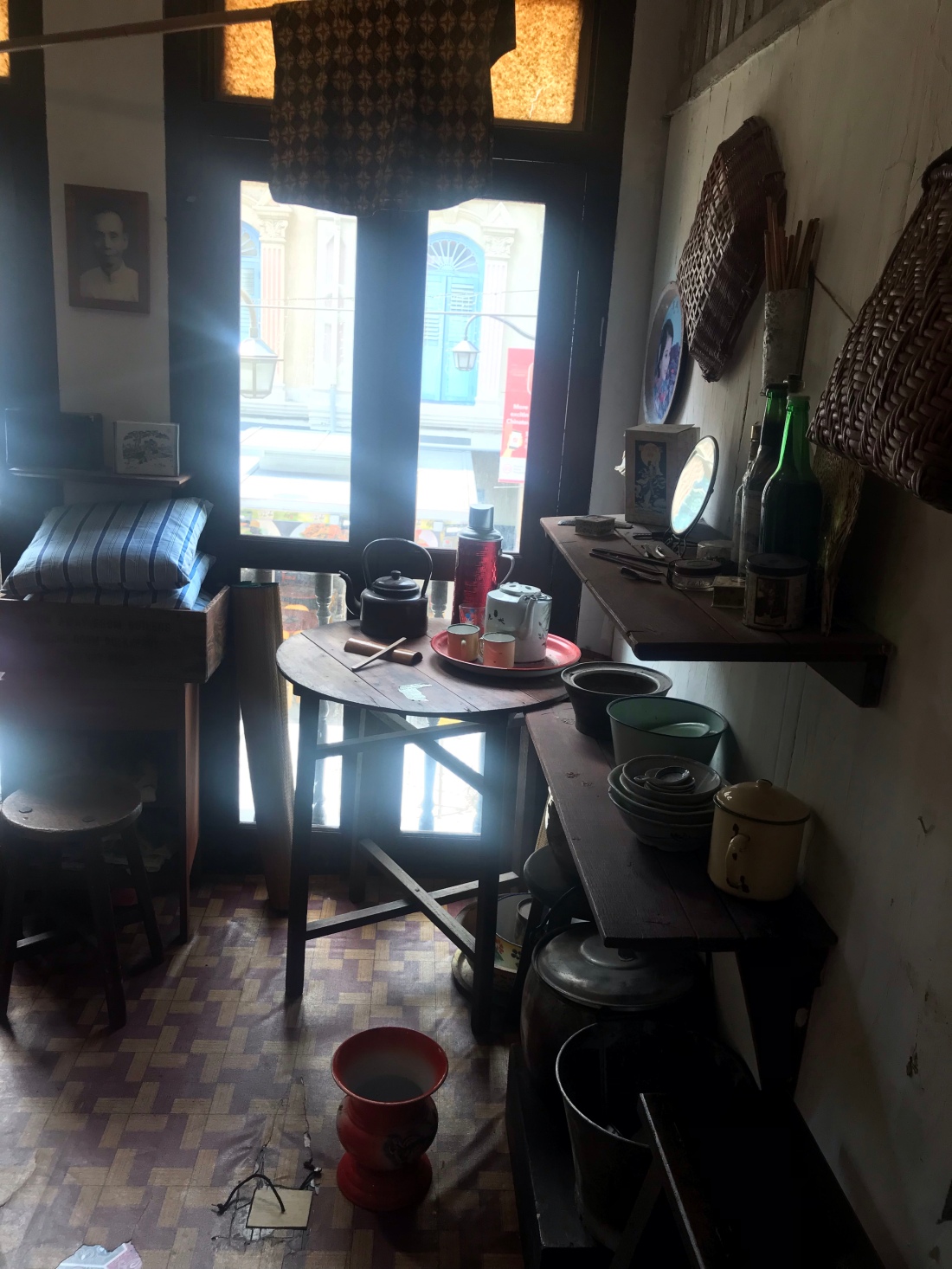 The rest of the museum talked about the vices people indulged in in order to numb the pain of their exhausting existence (namely, opium, gambling and prostitution), and the secret societies that prospered rather dubiously from them. Then it looked more positively at the social clubs and institutions that formed within the different Chinese families that actually were the first to establish systems of welfare, schools and hospitals for the ordinary people.

And then it depicted a few of the streets as they would have been, including the “Street of the Dead”, where people who had no family in Singapore would go to die. As it pointed out, this nation was built on the backs of many of those people. There was a space set aside for quiet reflection about that.

Apparently one guy who grew up on this street turned out to be a child prodigy on the violin, and ended up living in Manchester (about an hour from where I live in the UK) and from 1980-1996 playing lead violin for the Hallé Orchestra (the orchestra the choir I sing in most often performs with)! What are the chances of that???

Also they depicted the hawkers selling food, letter writers (most people were illiterate so had to pay to get someone to write letters home for them), story tellers, Chinese opera performances (for those wealthy enough to access them) and so on.

Here’s the delicious traditional egg custard with very delicate pastry that I had for free at the famous historical Tong Heng bakery round the corner, courtesy of the museum. It was so tasty, I must confess I tried a couple of other delicacies there in the name of research, and then bought a box of some for Jamie and Shiv and co:

The rest of my time exploring Chinatown was spent admiring street art and finding the rather beautiful Thian Hock Keng temple, dedicated to the goddess Mazu, who people worshipped particularly thankfully when they’d survived the gruelling voyage here from China. Mazu was apparently an actual person, who was an incredibly strong swimmer who did indeed save many people from stormy seas near her home in China in something like the 10th century. She was given goddess status after her death, with legends about her coming back mysteriously to save people from stormy seas still.

Shiv mentioned being at this temple one day when it was raining, and enjoying the sight of the incense smoke drifting upwards as the rain was pouring down from the roof tiles. I know, from the Chinese Garden in Dunedin, New Zealand, that these roof tiles are crafted and aligned in order to direct water in this beautiful way. Although it wasn’t raining when I was here, I could imagine what a wonderful sight this would have been, speaking perhaps something of the blessing of God raining down in response to the prayers, thanks and worship people offer. 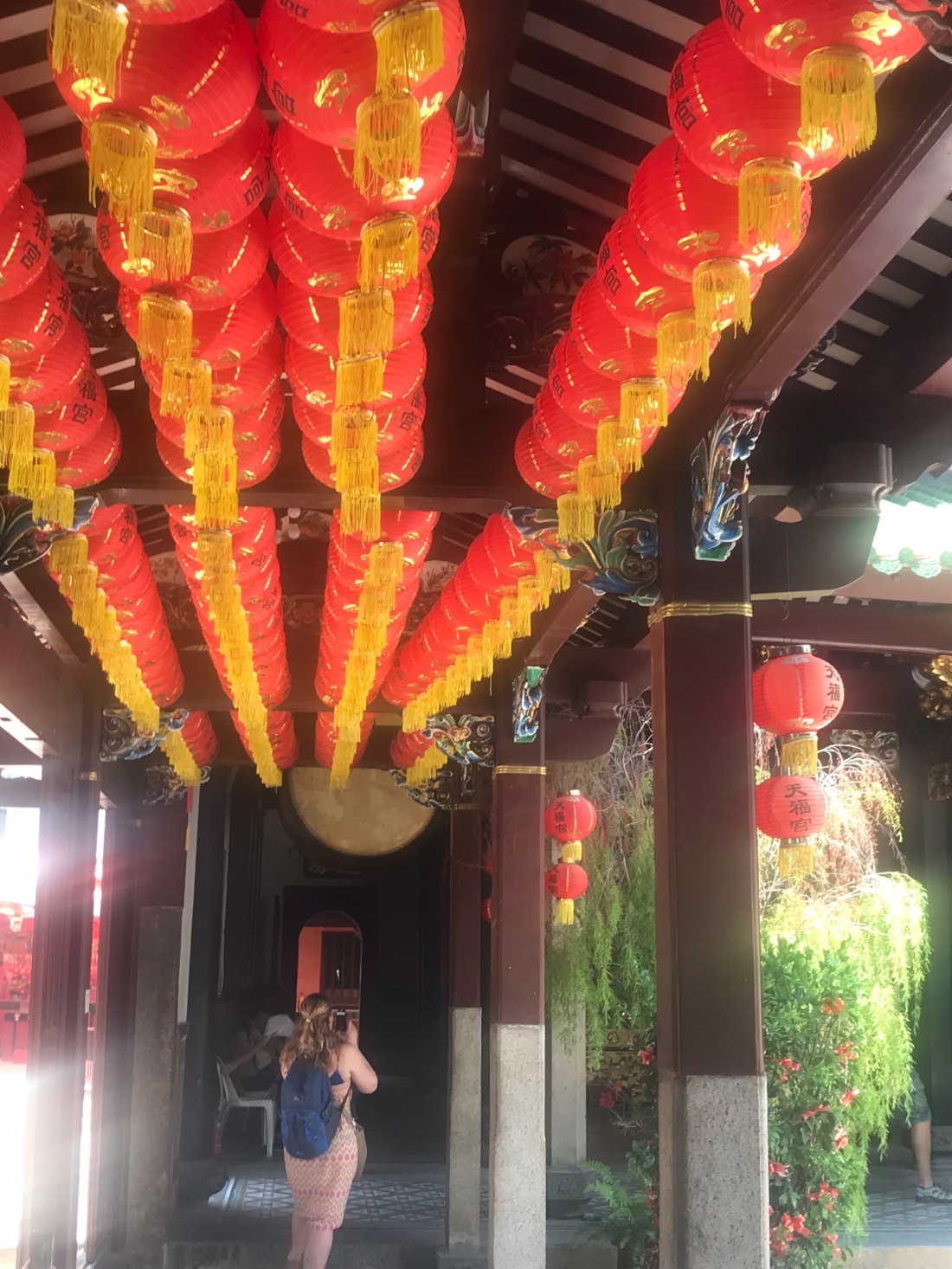 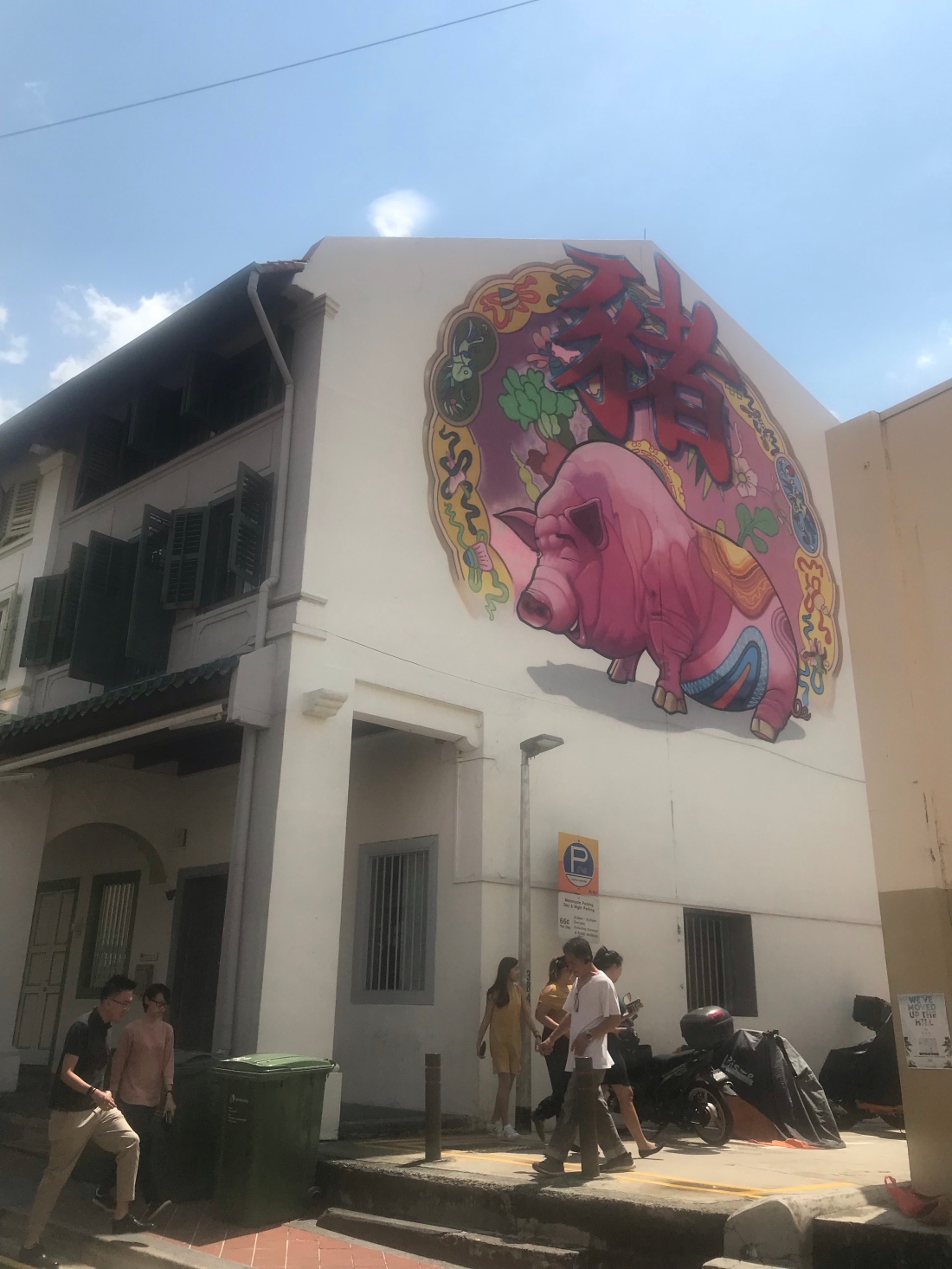 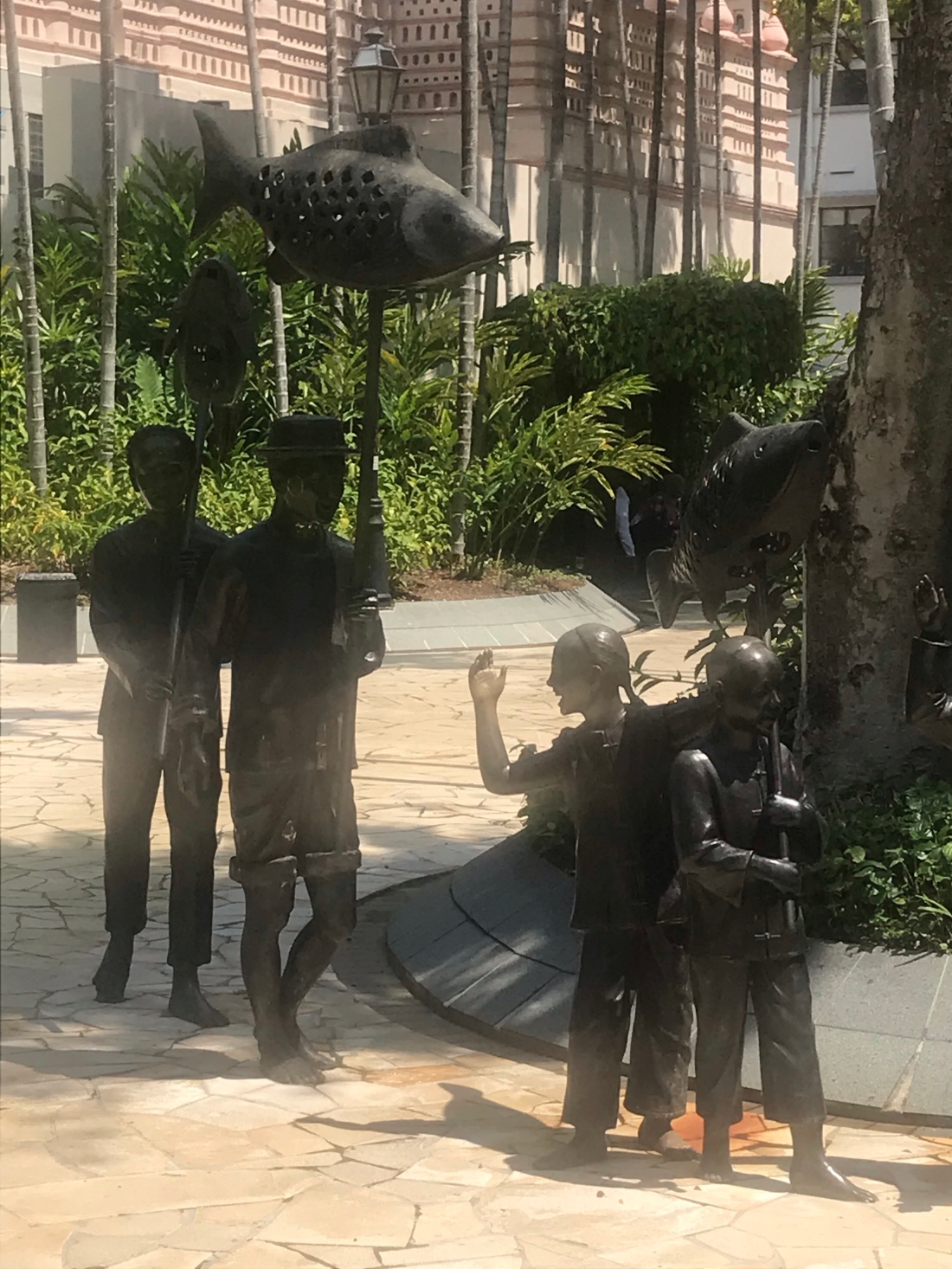