I spent a lovely weekend mainly with my friends who have been hosting me so generously and their children.

First stop: Fencing Gala competition with T, who only went and won the whole thing! But, as all the competitors (including some very small children) had to pledge right at the start, “When we win we will not be proud, when we lose we will not cry”, I had better not go on about how good she was! Anyway, good on her! I find myself mulling over the pledge, though. It’s good, and T’s opponent in the final was particularly sporting, giving her a hug and saying “well done” to her in a very genuine way.

But what happens if we’re never allowed to cry? Let me not extrapolate a whole lot of meaning from this one small thing, which is obviously mainly aimed at littlies. But I have just read The language of tears by David Runcorn, which highlights how, in rather repressed British culture, we are often not allowed to cry, or how derogatory words are assigned to crying, to try and avoid the – what – embarrassment (?) of it? And how problematic all the unprocessed griefs of our lives can become if we’re never able to properly lament them. I’m not sure whether the strong concept of shame I think I’ve heard about in Singaporean cultures might lead to similar problems.

I hived off on my own after the fencing victory to have a look around Little India. I kid you not, this was the first sight that greeted me as I surfaced from the tube station (can’t beat a bit of Bhangra – what is it about it that means it’s impossible to not smile or start joining in the dance?!):

I followed Shiv’s recommendation of the veggie restaurant Komala Vilas, where I reckon I had the best curry I’ve ever tasted (and I’ve had a lot of curries!): 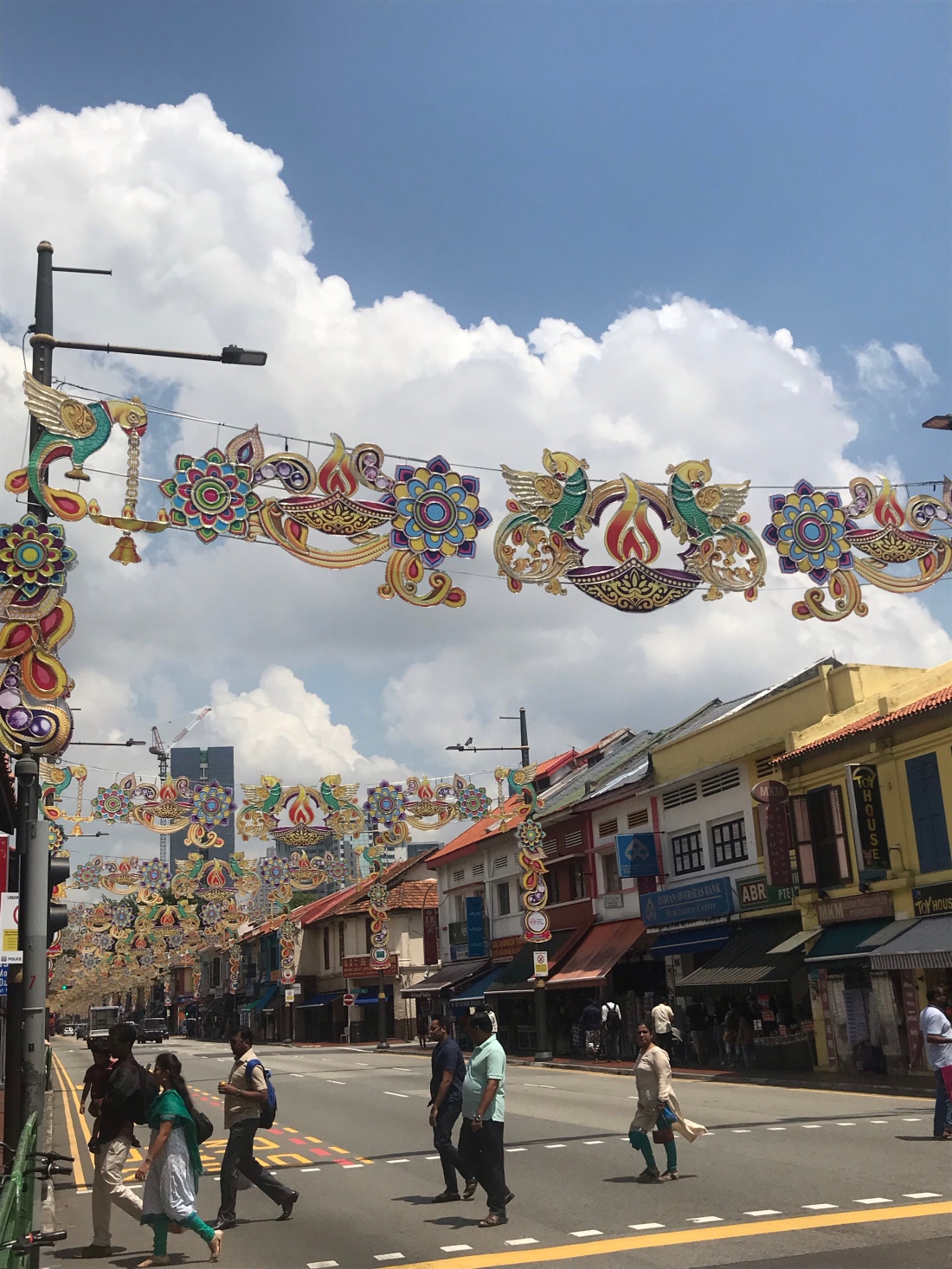 After this delicious repast (during which the waiters came round twice to offer me more even though you pay up front), I wandered around a few streets, looking at street art (there is a lot) and colourful buildings and shop displays, but before long found the heat just too much, so I found a café and soaked up the atmosphere from a well fanned seat, sipping a Singapore Sling (well, when in Rome…). 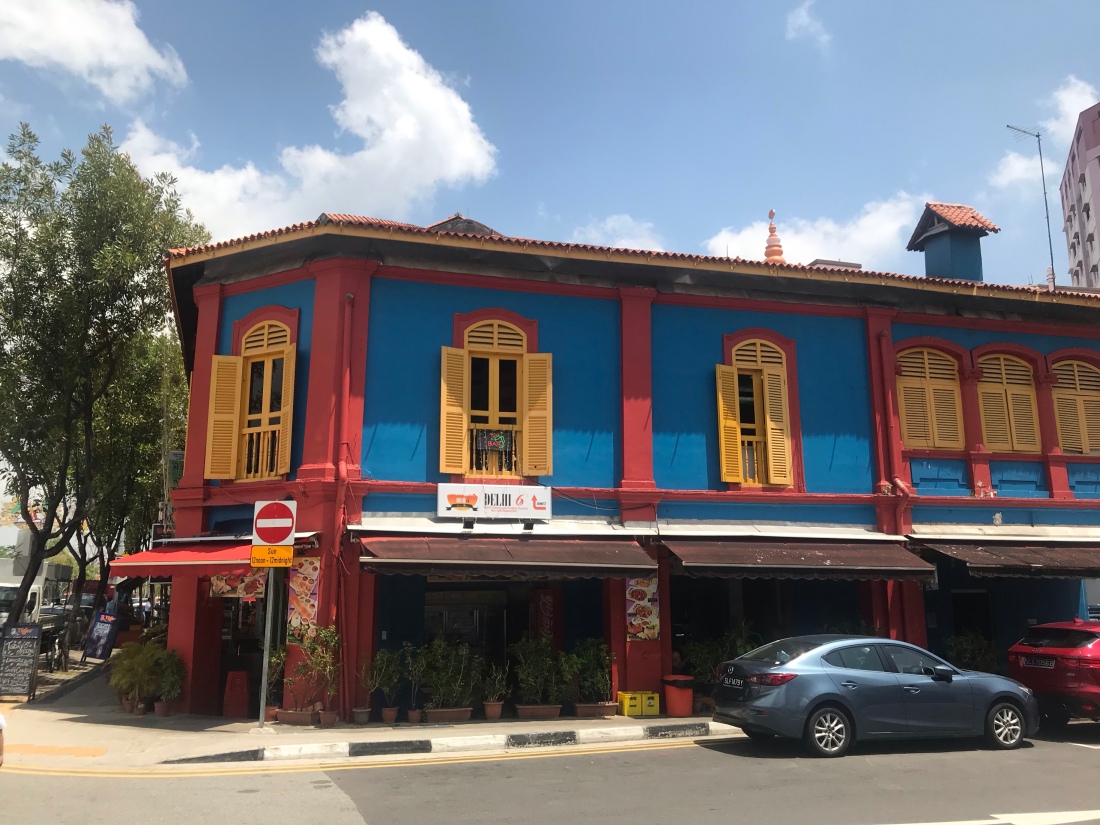 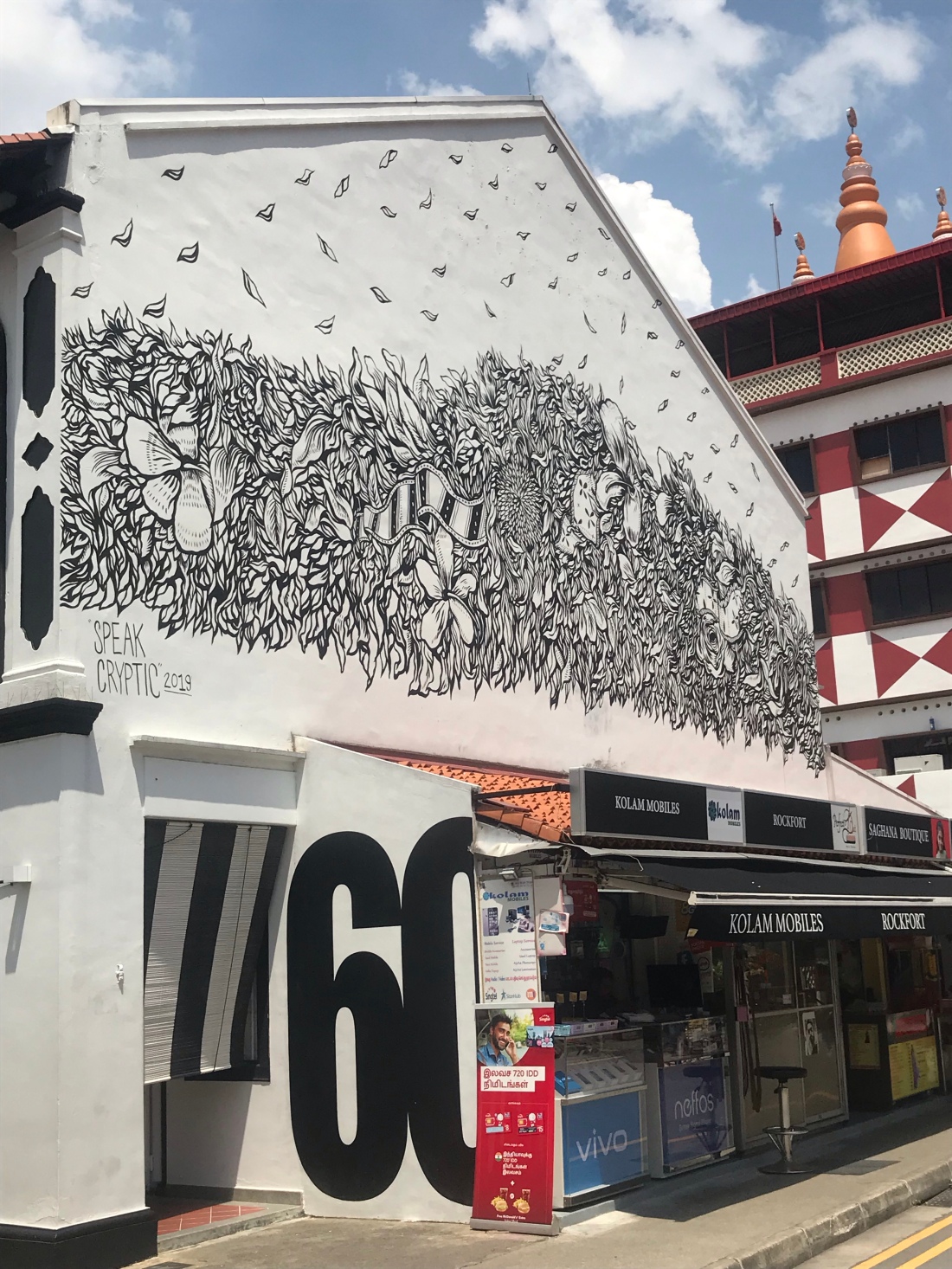 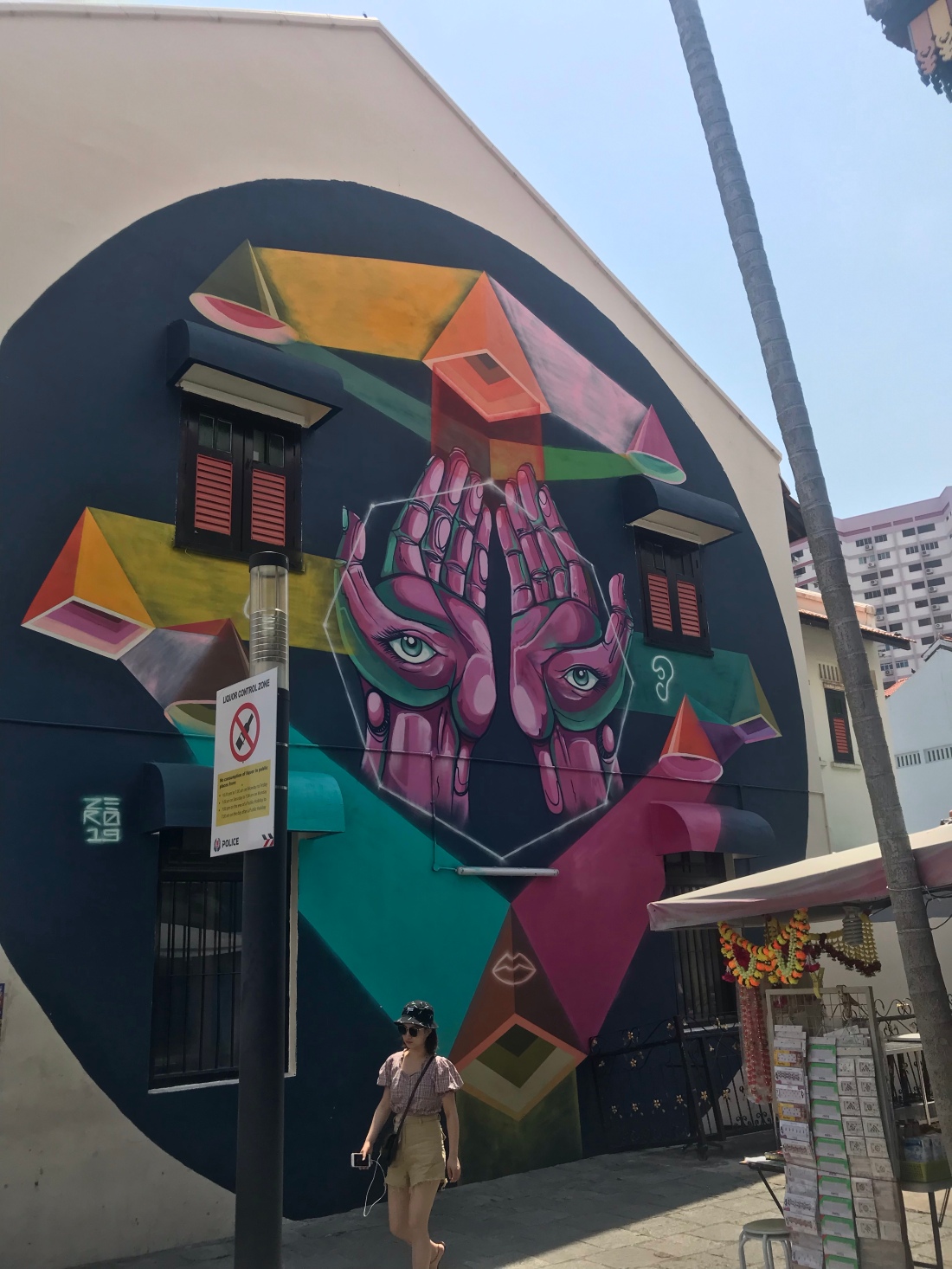 There is a real man walking past this huge mural, but it’s not easy to work out which one is real and which is just in the picture at first: 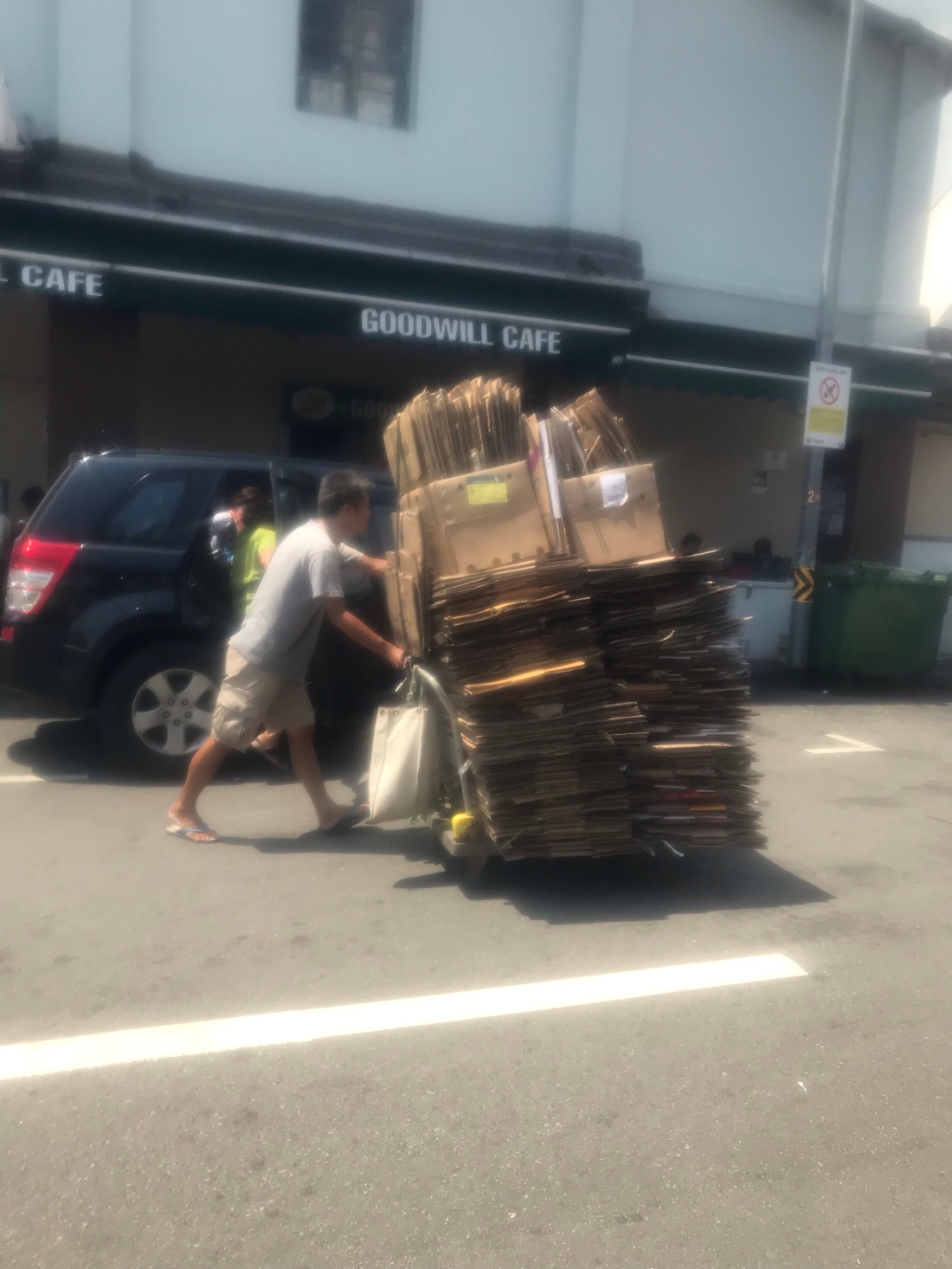 Later that evening we went altogether with one of T’s friends to a restaurant to sample some really top notch Hainan Chicken Rice, which I gather is really the national dish of Singapore (well, the Singaporean version of it anyway. Best cooked by people from Hainan province in China). Eating out is really very cheap here, and if you know where to go, the food you are served is really good, even though it may be served in a place that doesn’t look like it’s up to much. I was still full from my lunch, but managed to sample something of everything. It was really delicious.

Calamansi – a type of lime juice (calamansi fruit look like limes but are sweeter and have orange flesh. The juice tasted like a type of orange to me)

Morning glory (like spinach) in shrimp paste with other spices too.

The chicken (and some pork too), which was roasted in a delicately flavoured broth, which was then used to cook the rice. Hmmm tasty!

On Sunday, we went to church together, which felt slightly disturbingly English to me after all of those temples! (It was an Anglican Church to be fair.) It was good to be on a kind of home territory, and to be among other Christians, doing what we do. Then we piled off to a local mall to eat in the food court there and for some time to chat together with extended family and others. Then we went back for a rest, which in my case was much needed!

2 thoughts on “A family weekend”