From Westport, we travelled south along the west coast, on the twisty road, through long stretches of mist. Lush greenery extended up the steep hillside to our left, while the cliffs dropped away towards the sea to our right. Every now and again, there were lay-bys to pull into to admire the view over the bays below. For quite a while this route really strongly reminded me of the Pacific Coast Highway in California. The further south we travelled, the heavier the rain became, making me doubly thankful for our second breakfast of warmed scones and coffee.

We stopped off at Punakaiki to have a walk around the “Pancake” Rocks and Blowholes. Called pancake because of the flat layers in the rocks looking like stacked pancakes. The noticeboards indicated some confusion among scientists about what exactly has caused this phenomenon. 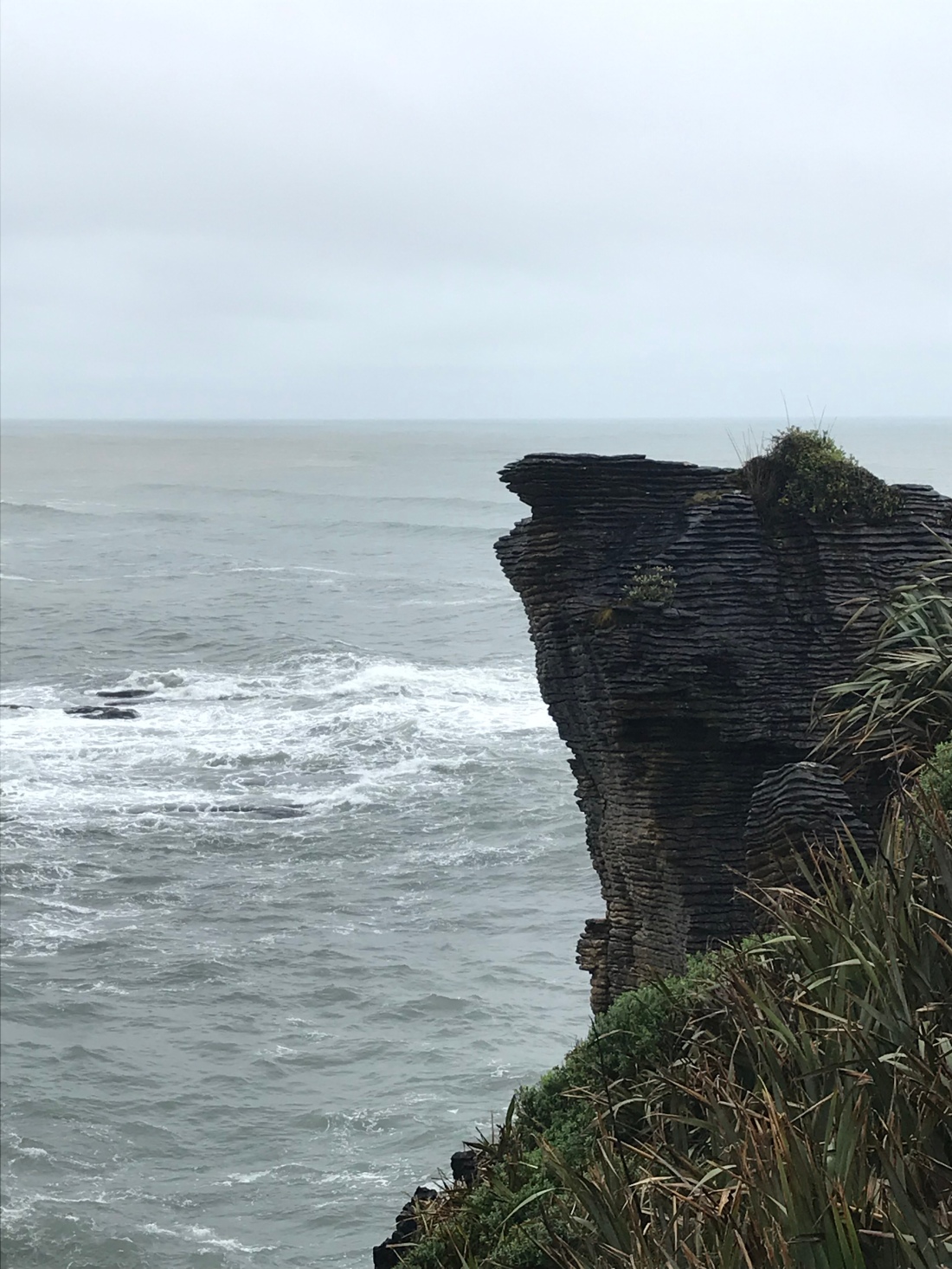 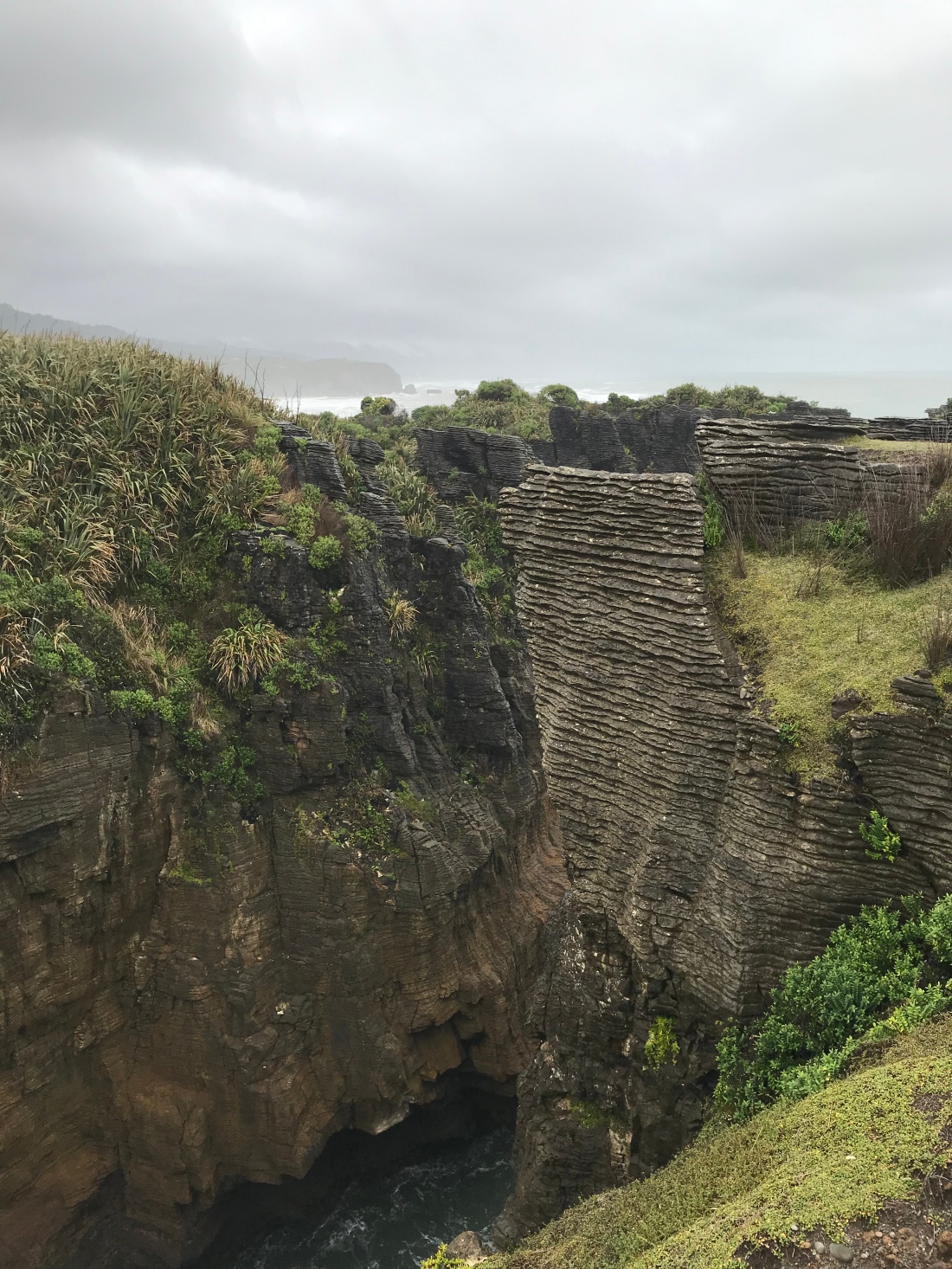 Near the car park, we found a very kiwi phenomenon. We had been driving for a couple of hours passing no settlements, and yet here was the postman, in his bright red van, putting post in all these postboxes for people who must live somewhere nearby: 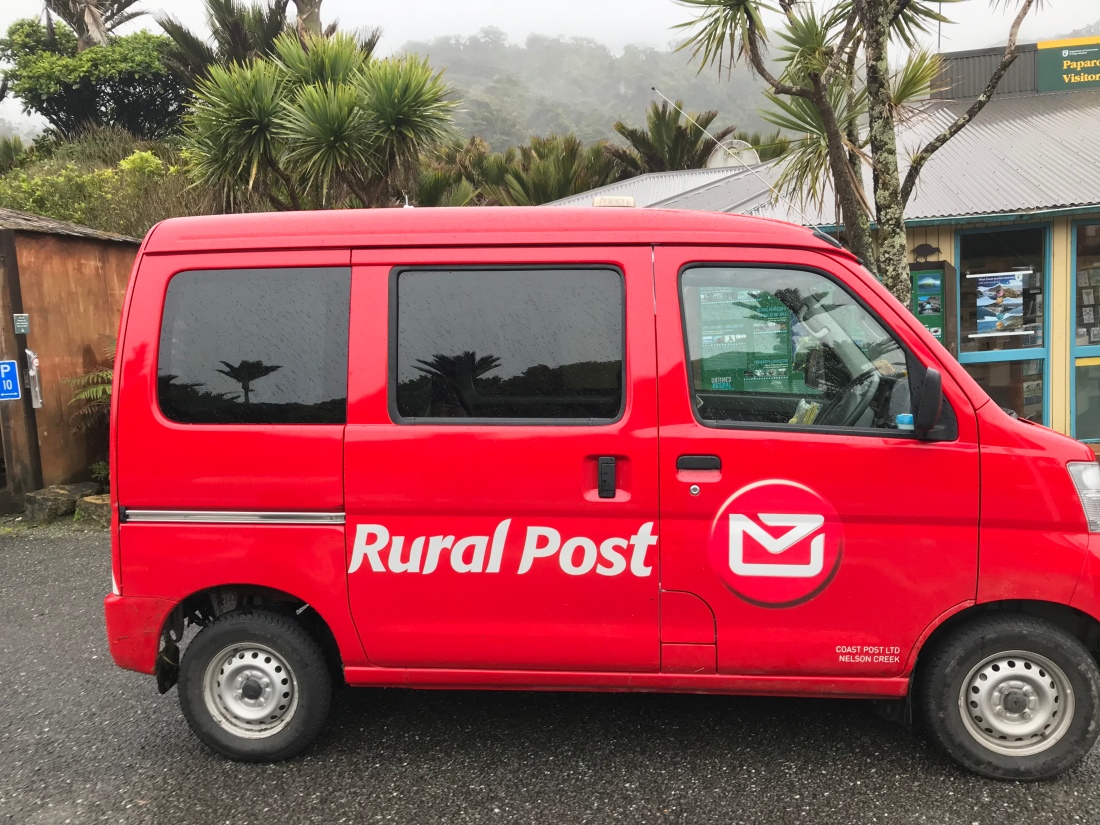 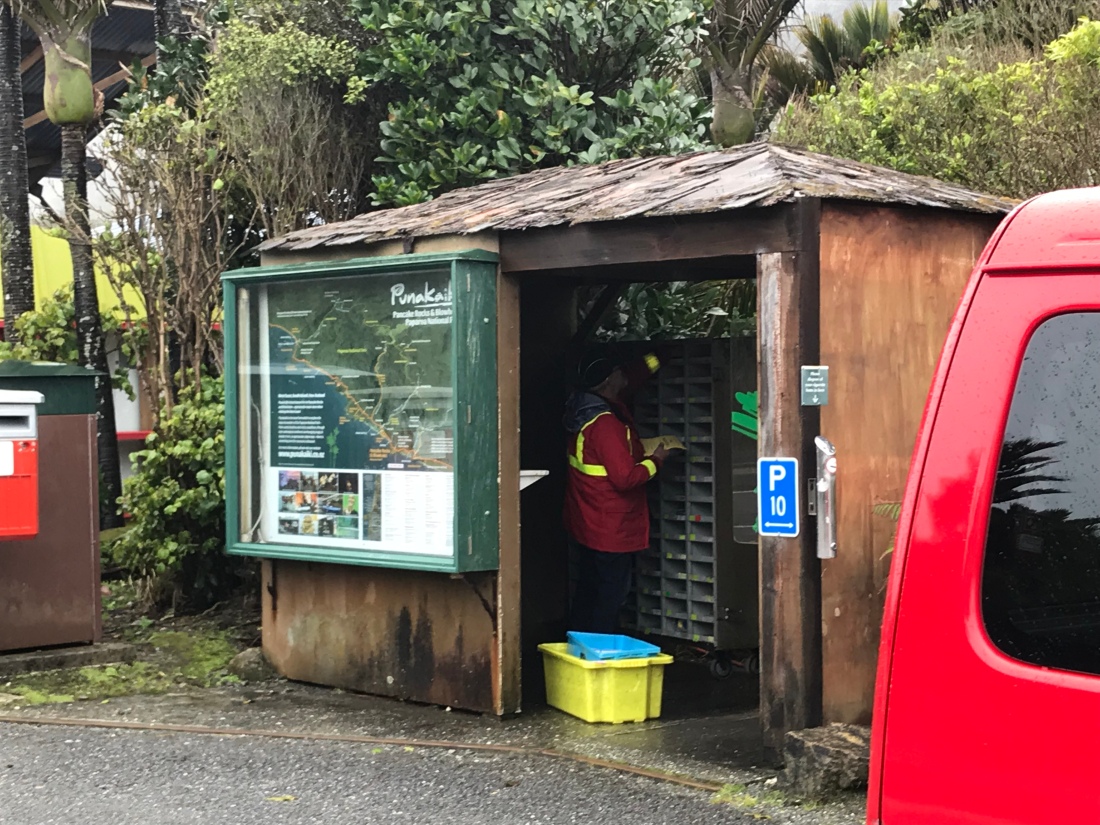 New Zealand has been famous for sheep farming for as long as I can remember. But more recently it has developed a vast dairy cattle farming industry, and also deer farming, too. About which more later. The farmers talk about how they actually mainly farm grass. Because it’s the quality of the grass that improves the quality of the livestock. Occasionally, our progress was slowed by livestock. This instance gives an idea of the numbers of cows involved in each “station” (farm).

After another couple of hours we stopped for lunch in a café with very good pies; in New Zealand there’s a real thing about pies, which are on offer everywhere. This café also had some great art on the walls: 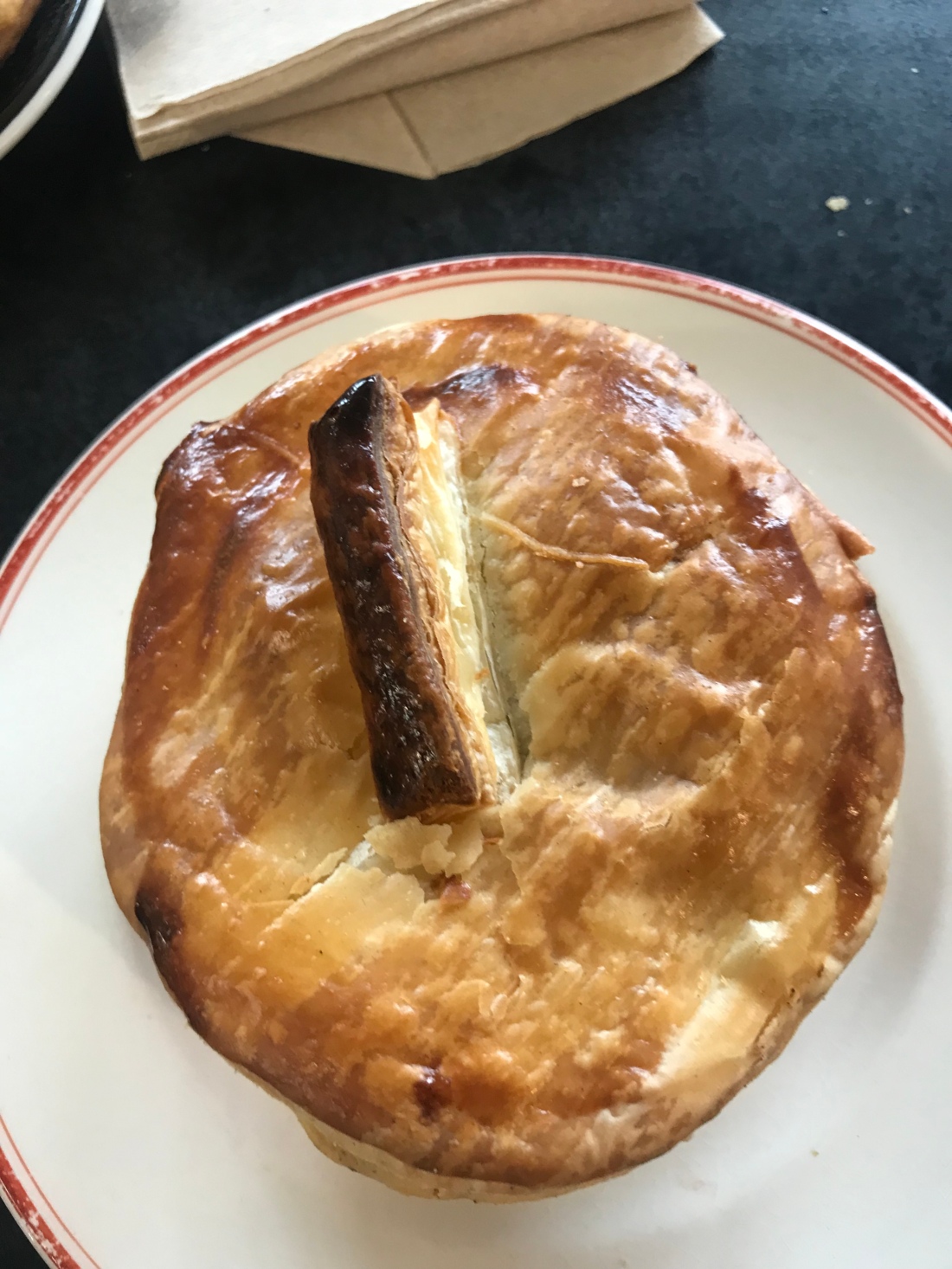 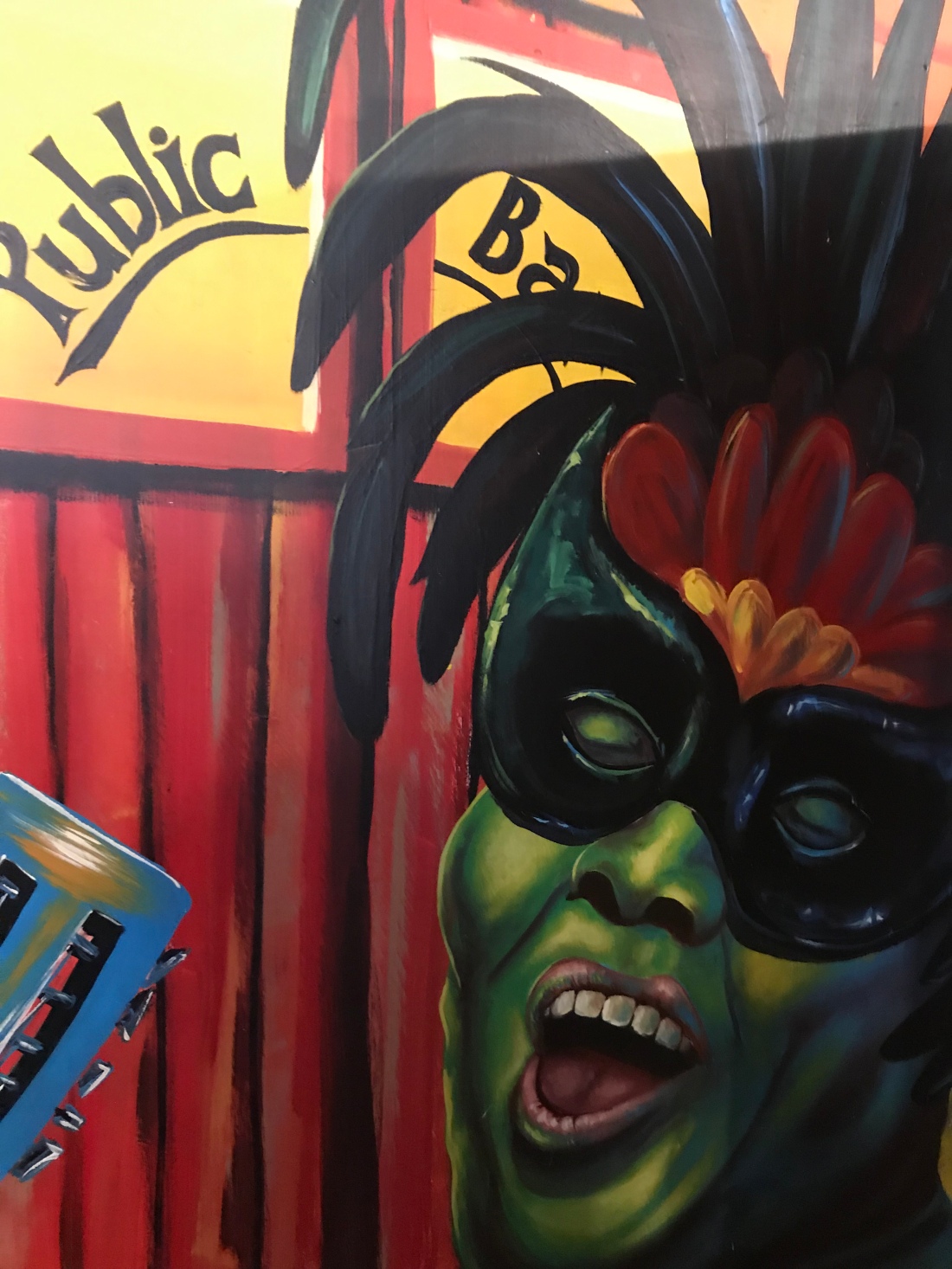 From here on, the rain really set in and this was my view for what seemed like aaaaages: 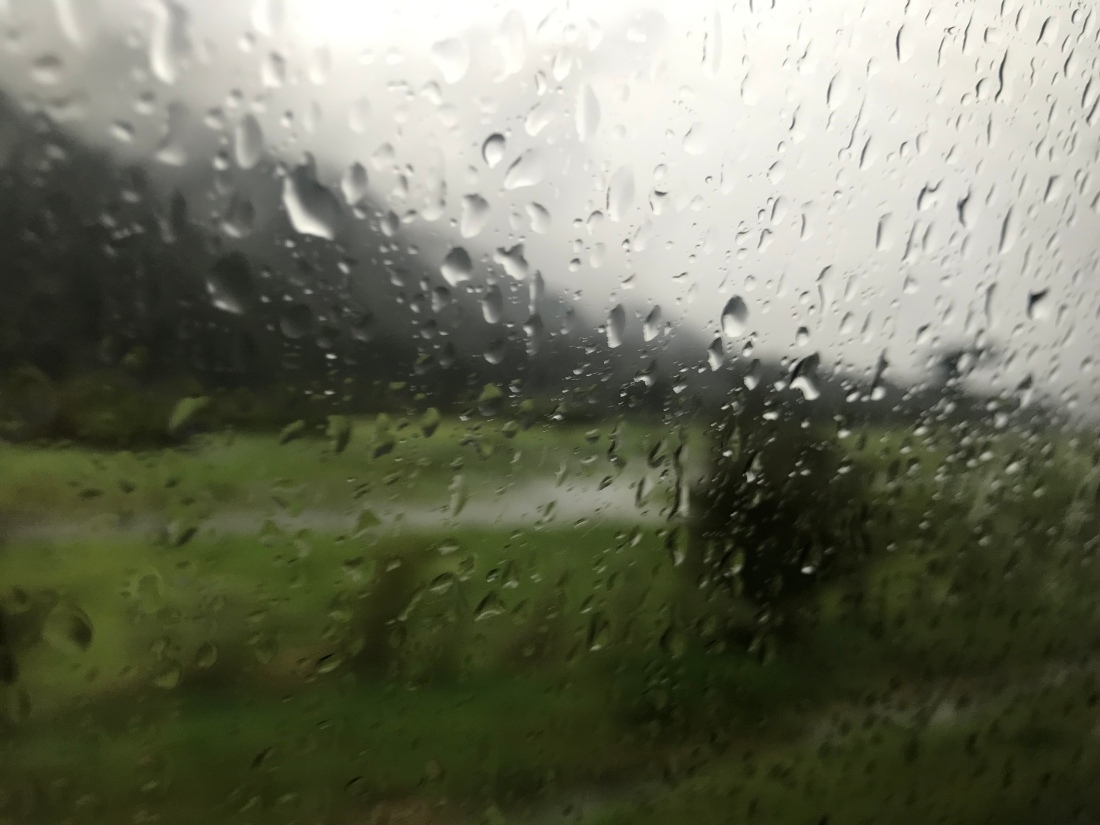 Apparently, this is situation normal for the West coast, which is exposed to the worst the notoriously rough Tasman Sea can throw at it.

The rain was relentless, as it often is here, but I was heartened when I heard that the South Island gets 98% of its electricity from hydropower. 98%! That’s making the most of your natural resources. As our conversations about climate change continue, we could do worse than to think about how a country with such a small population has managed to get its act together so much better than most of the rest of us regarding using renewable energy.

We drove on through vast tracts of subtropical beech forest. Either side of the road was marked with short white posts with red reflectors on them so you would be able to see where it went in the dark.

After Hokitika the road often narrowed into single lane bridges that spanned rivers with huge floodplains, which fill up incredibly quickly here because of the sheer quantity of rainfall. I’m not sure but I think sometimes these rivers were something like a quarter of a mile wide.

Waterfalls are not an occasional spectacular phenomenon here. They happen every hundred yards or so. The water fell from the hillsides as from a wet sponge.

Grey hills loomed ahead, shrouded in mist. Then we arrived at the Franz Josef glacier. We were hoping to be able to see the bottom of it, but there was too much rain so they had to close the path that would get us near enough to see it. We walked as far as we could from the car park to see what we could see, but in vain. Within minutes, even with very good wet weather gear on my legs and feet had turned into sponges.

As we drove on, we passed some evocative place names:

There were stretches of road where we couldn’t actually see much as the valley sides were so steep and covered in lush greenery and much higher than the height of the car. Vertical cliff faces rose above us on either side and often in front of us as the road twisted and turned its way south along the coastline.

We stopped for the night in the town of Fox next to the Fox Glacier, that we also couldn’t see for mist/cloud/rain. I wrote a note saying, “Where is all this rain coming from??? I wouldn’t have thought there could be so much! I’m sure I heard it stop in the night maybe for about an hour. Then start up again.”

In the morning I was woken by a chaffinch tap tapping on my bedroom window. My uncle kept pointing out tiny bits of snow topped mountains that we were beginning to be able to see, floating eerily in between the clouds and mist. In the morning I went to look where he’d indicated, and finally, though there was still a lot of cloud, began to get more of a glimpse of them. I thought this was pretty awesome. My uncle chuckled and said, “You ain’t seen nothin yet”…

As we progressed further south, we stopped off at the enormous pub in Haast with the lady lighting a welcome open fire, and chatting away to us. The pub is huge and despite there being very few dwellings in the area, apparently it’s packed to the gunwales in season. I found a snakes and ladders game that we played while we warmed up with our coffees and hot chocolate.

From there we headed on up the Haast Pass. Although the weather was still very cloudy and rainy, more snow topped mountains began to peek through. Occasionally there were really special moments that I couldn’t manage to capture well on my phone camera, where the sun just illuminated a snow covered peak in an extraordinary, other worldly way. My best efforts at capturing that are below. 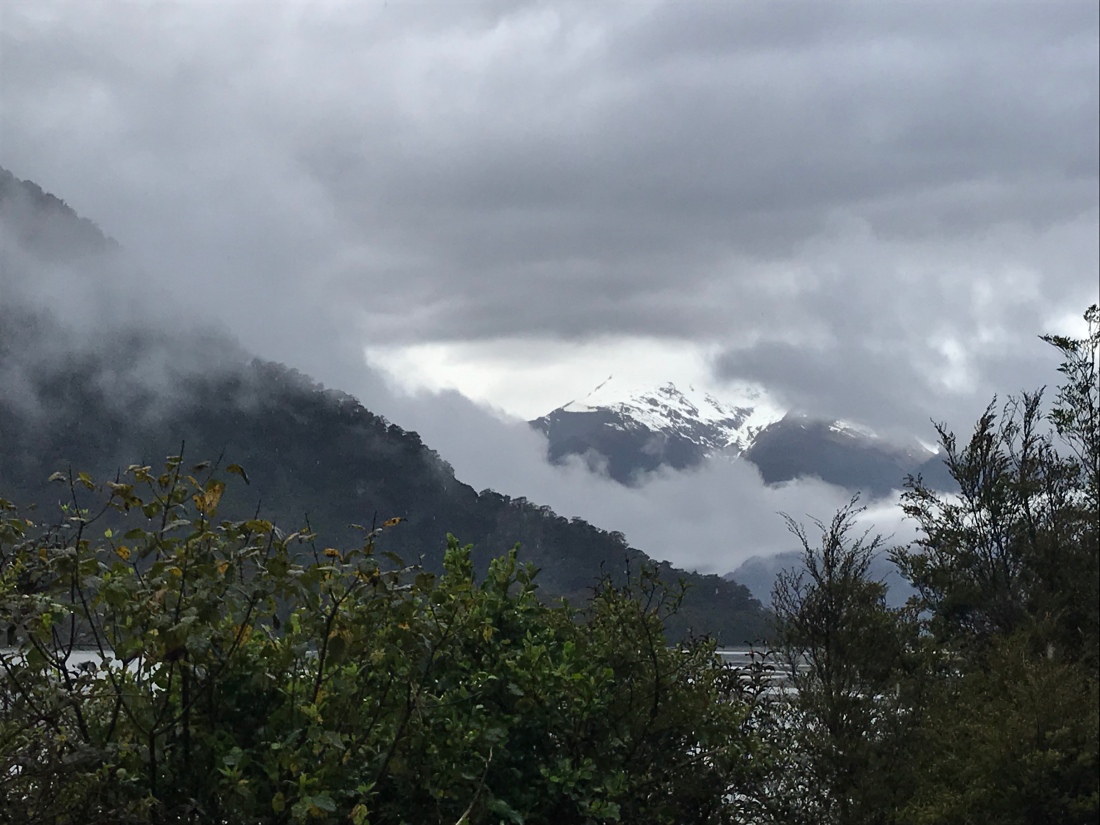 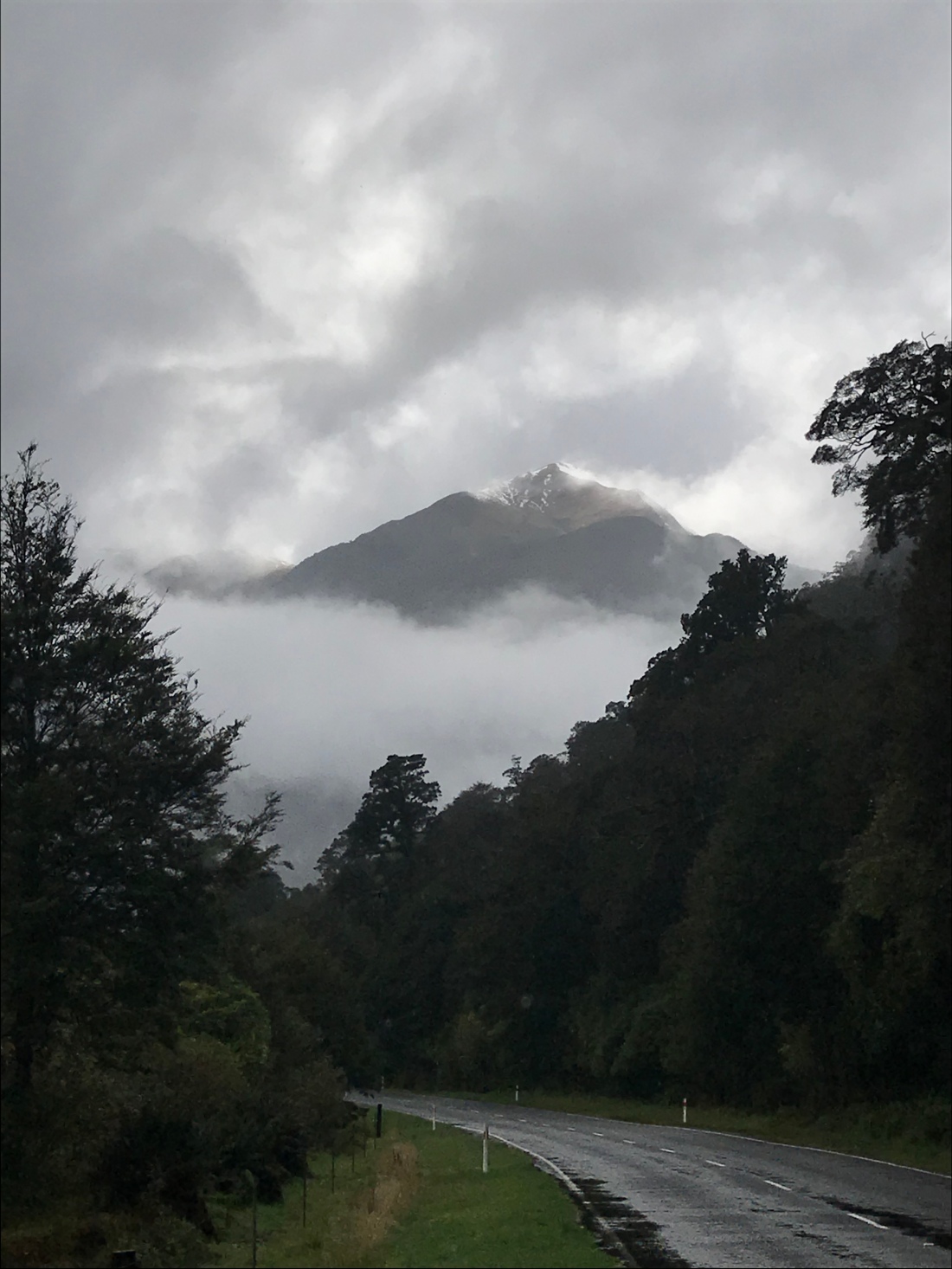 We stopped briefly at a waterfall, where I saw a brave (foolhardy?) fellow wild swimmer. She provides some scale to the waterfall here:

Having got past the glaciers (which end in huge wide rivers looking quite muddy with branches of trees and boulders occasionally strewn across their width), the water in all the rivers and lakes was crystal clear and freezing cold.

Our first sight of the enormous Lake Wanaka:

The Wanaka lake front itself, where we stopped for lunch (during which time the rain stopped, and weather cleared), was lined with willows:

2 thoughts on “The wet West coast”