Surprise no.1 in Queenstown, we stayed in a very nice apartment with this view from the French windows (called “ranch sliders” here). Obligatory jaw drop again.

Surprise no.2, my cousin Stu and his partner Tash flew down from Wellington to rejoin us for this part of our journey.

And there were many more surprises to come.

But first, a walk along the waterfront: 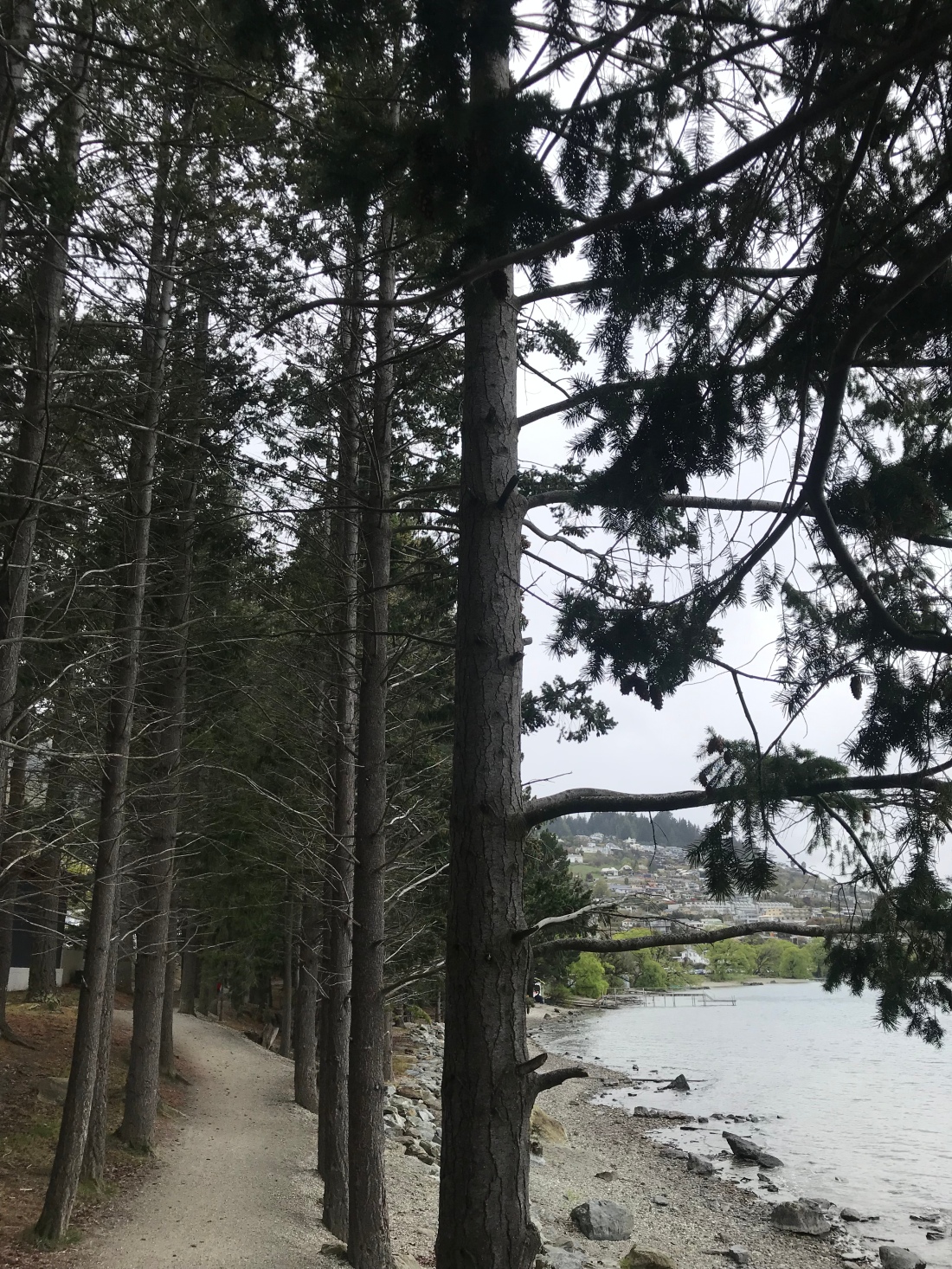 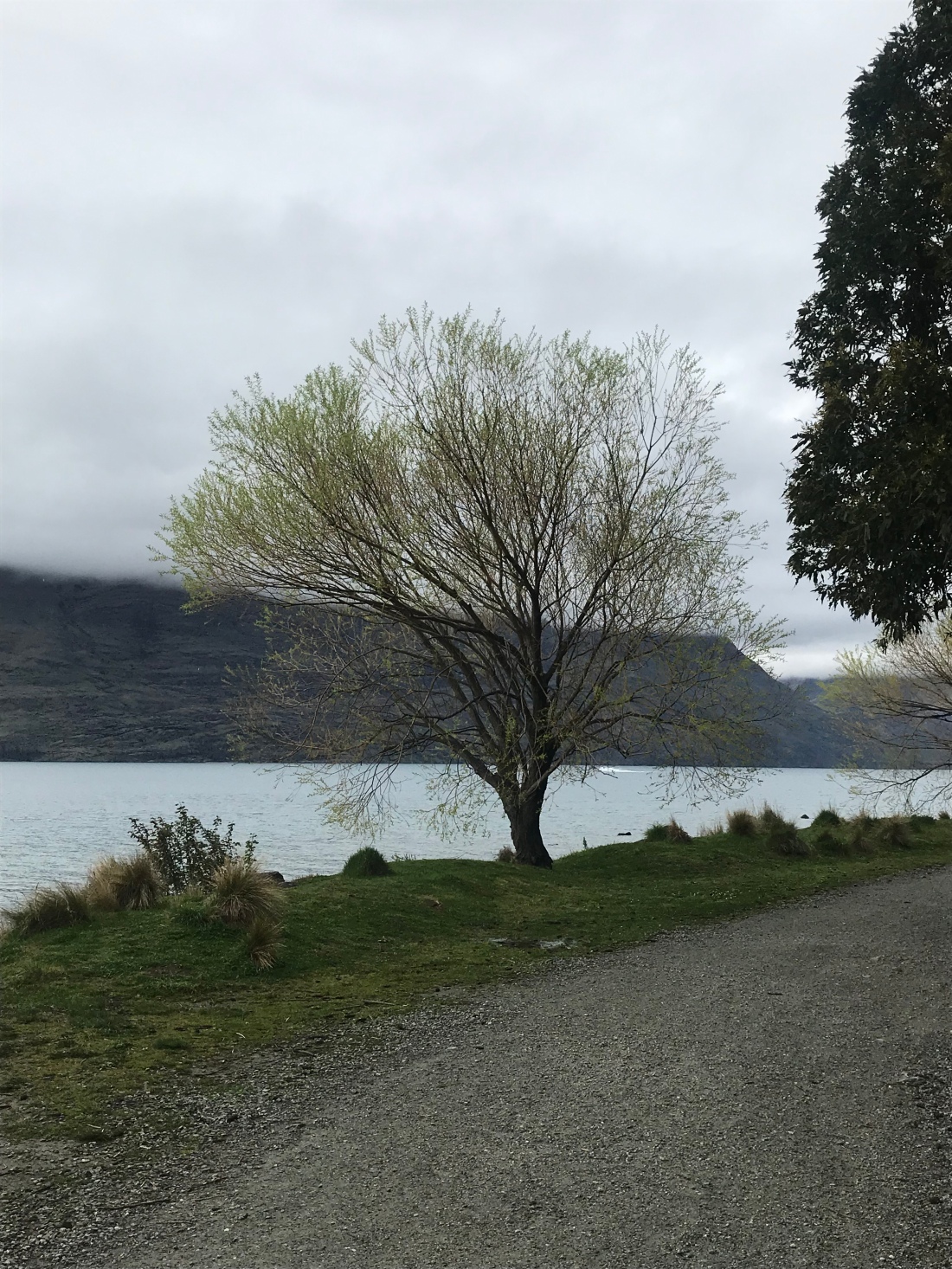 Kowhai tree 👇🏼; tui birds love to feed off the nectar in these yellow flowers.

My efforts to capture tui song continue (we think this might have been a chick just learning a few notes, who didn’t yet have the full range): 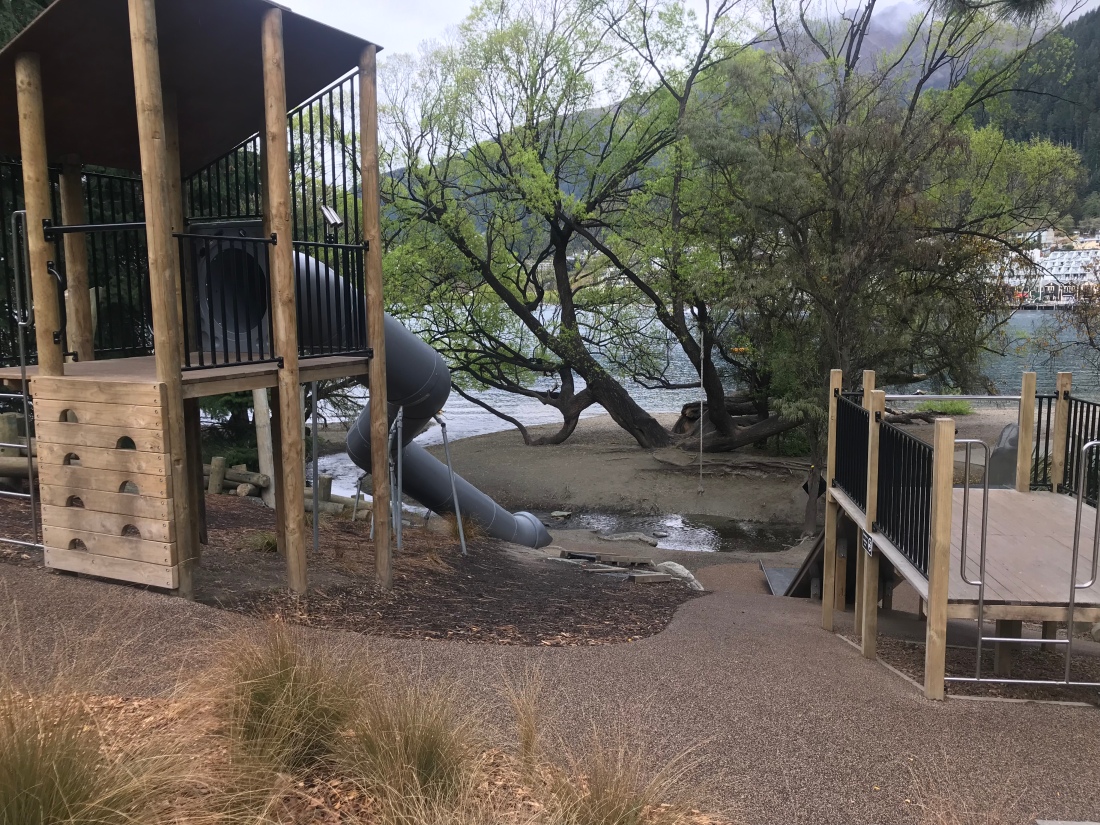 In the rich boys’ playground of Queenstown, where bungee jumping was invented, and the general idea seems to find a means of travelling as fast as possible, with no fear of gravity or water, the children’s playground has slides ending in a river. Start em young, that’s what I say!

Having lined our ribs satisfactorily with breakfast at my uncle’s favourite café, I was let into my next surprise…

Stu and Tash were proposing to treat me to a jet boat ride. This very enterprising waiter assured us that a jet boat ride is the most dangerous, death defying thing you can do in the whole of Queenstown, which is saying something, given it’s the home of bungee. Great. What is this kiwi obsession with going up high things and walking over see through glass, wire mesh, or just jumping off, or powering through water at such a rate of knots that your face threatens to fall off??? And how much longer will the combined obligations of politeness and “Well it’s not every day I get the chance to be somewhere this awesome and do this sort of thing” persuade me to keep saying “Yes” to everything???! (How long is a piece of string…?! 😂)

On the way to the jet boat we stopped off at a winery just up the road in Cromwell (an area famous for its fruit production) and indulged in a mini wine tasting with lunch, which warmed me up nicely and provided some Dutch courage for the challenge ahead.

I must admit, the jet boat ride was great fun. And it was raining, so hey, we were wet anyway. I smelt a rat when Tash said to Stu, “I’ll sit behind the driver”, but I didn’t quite figure out why. Oh my. Several 360 degree spins in both directions later in a fast flowing glacial river, and I realised. I realised a lot of things, including why there were two hair dryers and an enormous open fire in the lobby of the place! I’ve been in some heavy rain before, but I’ve never travelled so fast on a river that the rain pelts your face like bullets. I held my hood over my freezing forehead most of the time, but then when he did the spins, we were under strict instructions to hold on with both hands and push our feet against the floor in front to brace ourselves. During which time my hood invariably blew off my face. But when in Queenstown…

This 👆🏼was the river we jet boated on. At one point, our driver cut the engine and let us spin around with the current, admiring the jagged rocks on every side above us. Then we were off again, narrowly dodging jutting out rock faces at ridiculous speed, effortlessly against or with the fast current of the river.

On the way back from our jet boating adventure, we stopped off at the world’s first bungee jump bridge, started by A J Hackett (the first crazy person to bungee jump off the Eiffel Tower. A kiwi, of course). Already cold and wet, we enjoyed watching other, more crazy people jumping off the bridge from the safety of the viewing platform, sipping a very comforting hot chocolate. Stu watched and it made him think, “Hmmm maybe I could do that…?” I watched and thought, “OK, so I am never doing that. Not ever.” 😂

Having agreed we’d had enough excitement for one day, we hived off back to the apartment to recharge for the next day in this extraordinary place…