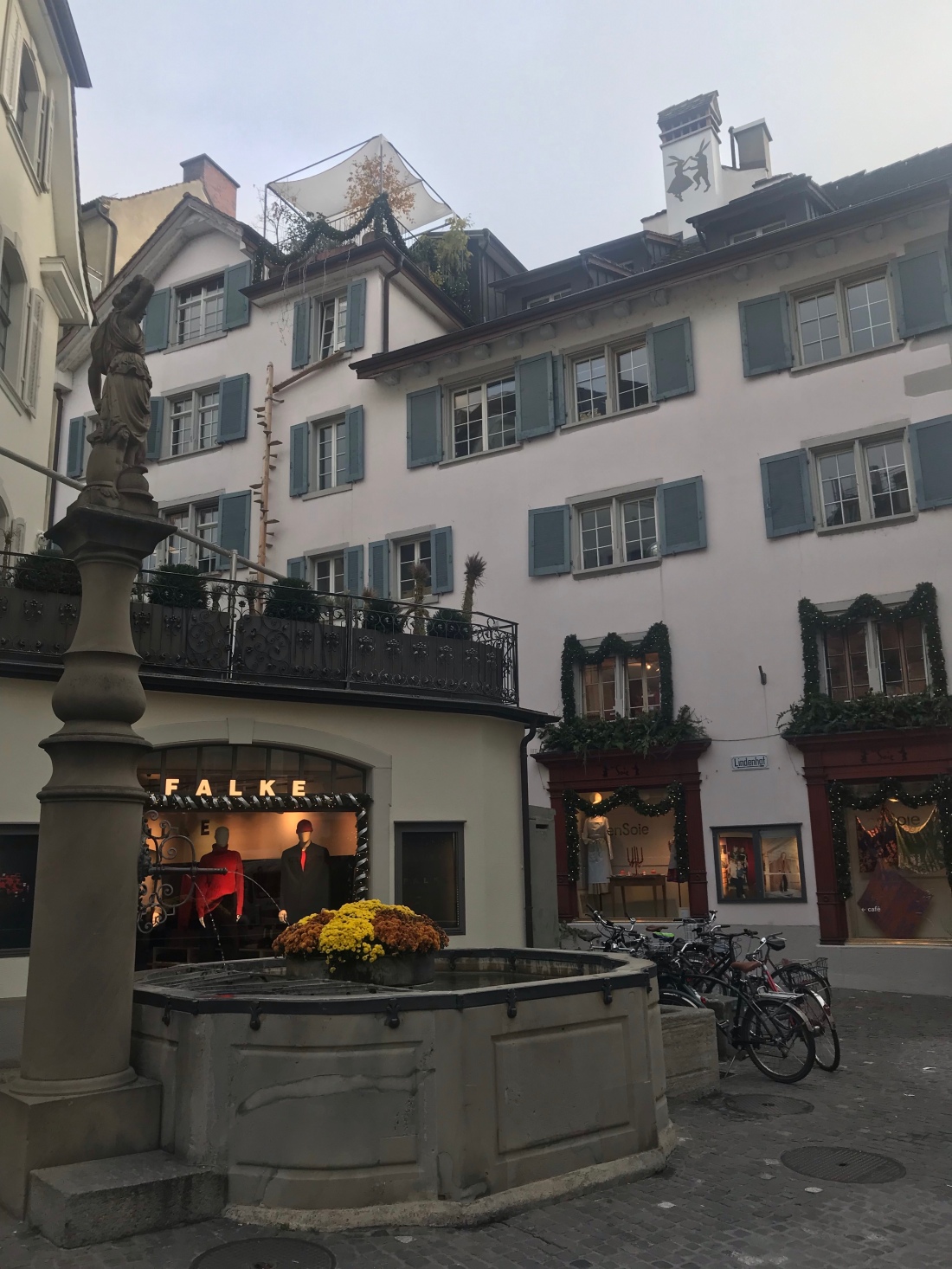 The air here is cold. Cold and very dry, somehow and I could see my breath as I emerged bleary eyed from the airport and gratefully walked straight onto the hotel shuttle bus at about 6:45am. Which for me today was about 12 hours after midnight (the wonder of traversing time zones).

The quickest way to get to Zurich city is to get the hotel airport shuttle back to the airport then hop on a train. The lady at the hotel reception waxed lyrical about the Christmas market which is already open and apparently very pretty. So, even though I felt tired from the flight, I decided to go with her suggestion while the hotel prepared my room.

5 minutes from the hotel, having decanted a rucksack of essentials and left the rest of my luggage at reception and I’m back at the airport. Half an hour later, having negotiated train ticketing and having asked people for help to find the correct station platform (asking for help like a pro now – well at least now it doesn’t take me so long to summon up the courage for it) and 15 minutes on a train and I’m here in the heart of Zürich.

Most things were not open when I arrived, but I gratefully found a very swish café already serving breakfast, which I was ready for despite having had a collection of boiled veg on the plane (hmmm vegan breakfast fail Swiss Air! Though the hash brown was tasty). From the café I established contact with Delia who I’d meet the next day. The bowl of pink stuff was delicious bircher 😋 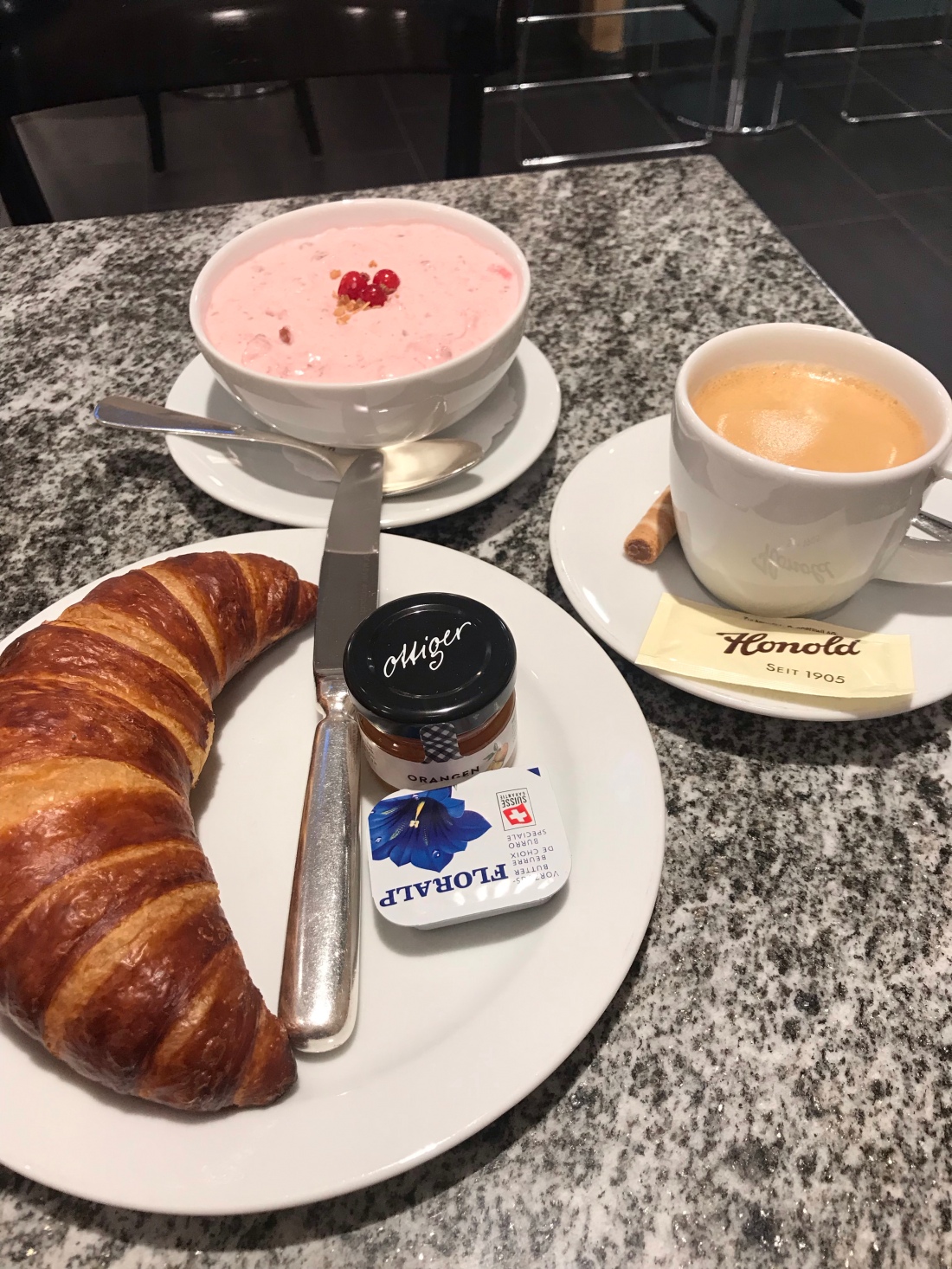 There’s a main Christmas market, not far from the river and the centre of Zürich, but actually there are lots of little cobbled corners lit up with huge Christmas trees and temporary lanes of wooden huts selling Glüwein, Wafflen, Würst, along with every kind of gift you can imagine.

Attempting to feel my way towards the centre of things, I gravitated towards the river, lined with pretty Swiss houses replete with wooden shutters. Then stumbled across a music shop, where I warmed up for a bit browsing the shelves.

I never thought that architecture could bring comfort with it before, but Jamie and Shiv have mentioned this phenomenon to me, in terms of the post colonial architecture in Penang and Malacca in Malaysia and in Singapore too. In Zürich, virtually every corner I rounded I found another historical building, with a date painted ornately on the immaculate render, along with something about its history. Somehow it felt very comforting to be surrounded by old things again. I’ve really missed that. 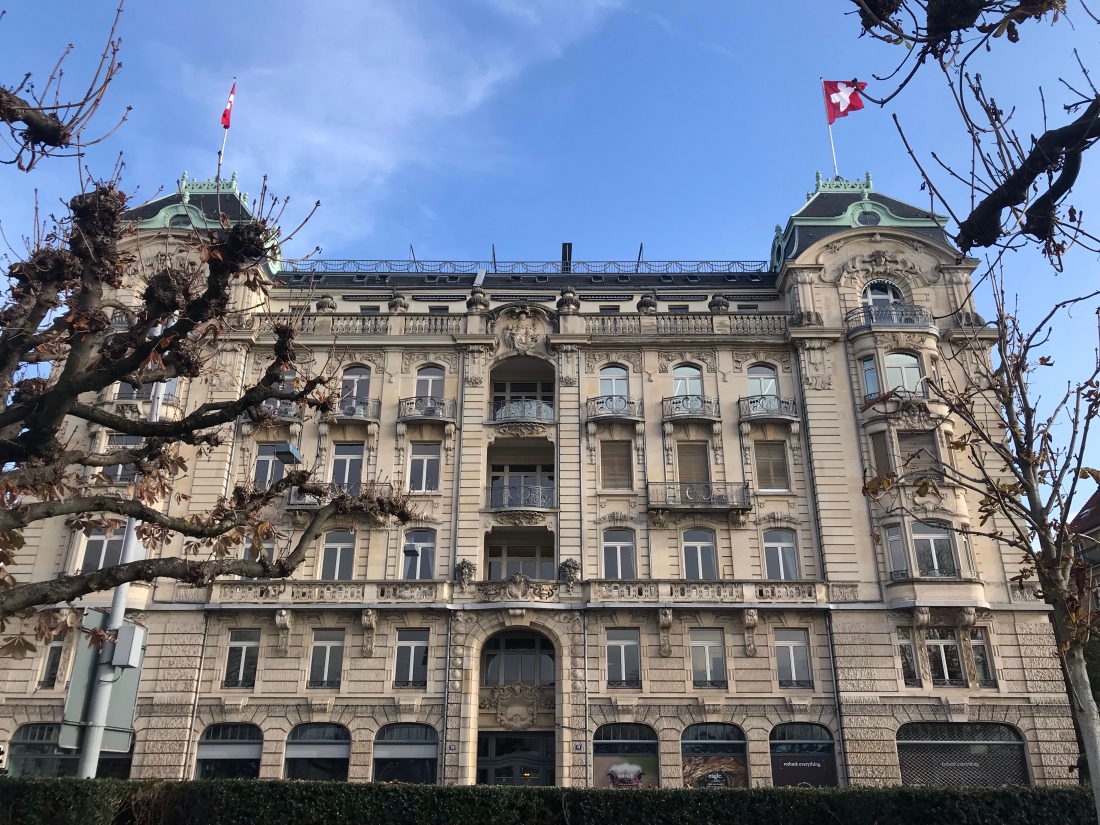 Before long, I found myself near the Kunsthaus Art Museum, where I spent a couple of hours pondering sculptures by Rodin, sculptures and drawings by Matisse, paintings by Picasso and by quite a few Swiss artists and sculptures by Giacometti.

On my meandering path you can’t begin to imagine how much pleasure I was deriving from being in a place still experiencing the last vestiges of autumn. The colours of leaves on the trees, the misty sky, the cold air, all things I have so missed on my travels that I found myself feeling surprisingly at home here.

At the Christmas market, I resisted the many other temptations on offer but indulged in Würst for a late lunch. 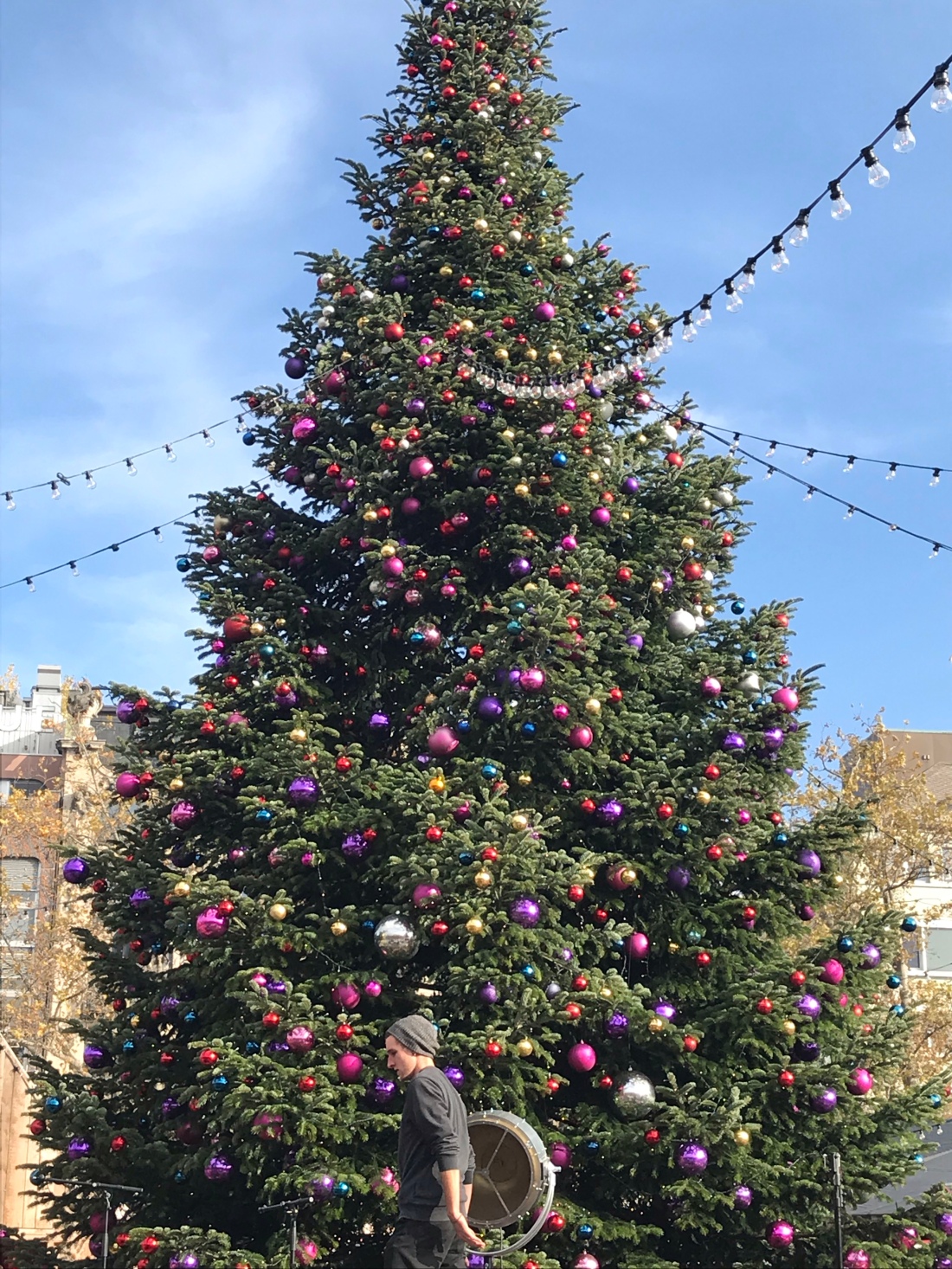 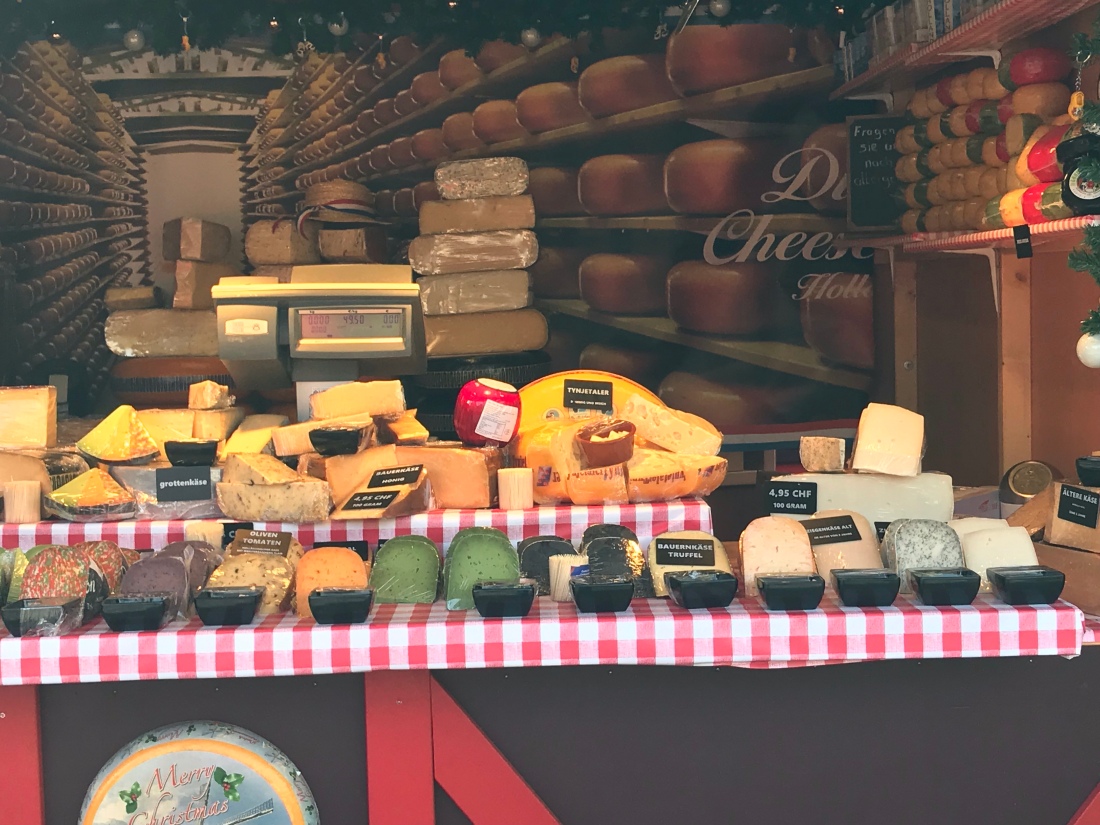 On my way back to the station, I managed to have a quick look around the Grossmünster and the Fraumünster (two of the biggest churches in the middle of Zürich) just before they closed. I was particularly interested in the latter, which began life as a Benedictine convent, founded in 853 by Louis the German for his daughter Hildegard. He gave the convent the land of Zürich, Uri and the Albis Forest. In 1045, King Henry III gave the convent the right to hold markets, collect tolls and mint coins, which apparently effectively made the Abbess the ruler of the city. But in 1336 the city’s first independent mayor was appointed (ie not the Abbess’ appointment), and the convent’s political power waned.

The abbey was dissolved in 1524 in the course of the Reformation by Zwingli. Its last abbess, Katharina Von Zimmern, to whom there is a memorial altar, agreed to its dissolution, though it must have cost her a lot. A lady also spending a thoughtful moment here, told me in halting English that Katharina was a great lady, because she was so concerned about disunity in the church that she decided to allow the abbey to be dissolved, rather than engage in a fight to save it that would create further discord with Zwingli and the Reformers. Food for thought.

I was either too late or you can’t currently see inside the church space where apparently there are five windows by Mark Chagall and another one by Giacometti that I’d have loved to have seen. But I could see the numerous frescoes on the cloister walls. 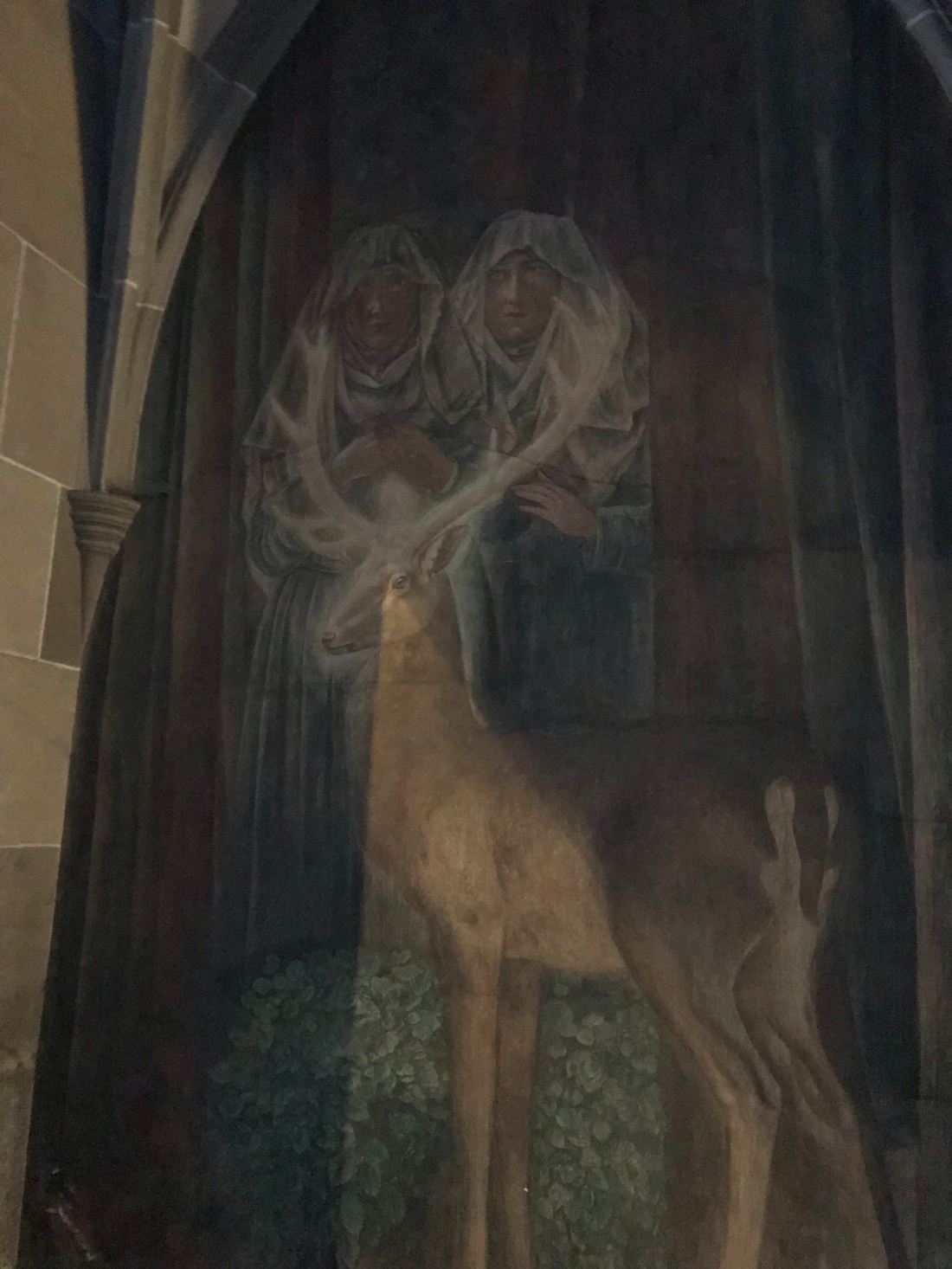 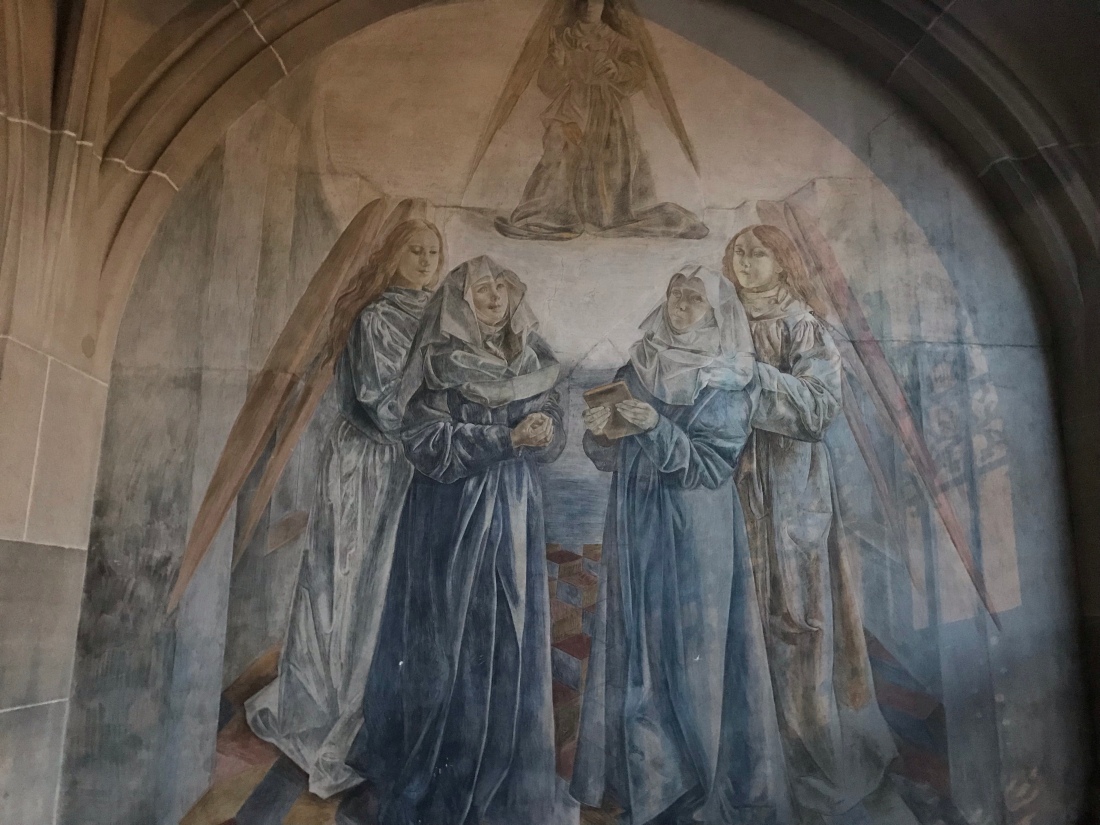 Somehow, in spite of my plans to spend a lazy day in the hotel, Zürich enticed me to stay until the evening, when the whole place was lit with tiny white fairy lights apparently strung from the sky like stars. 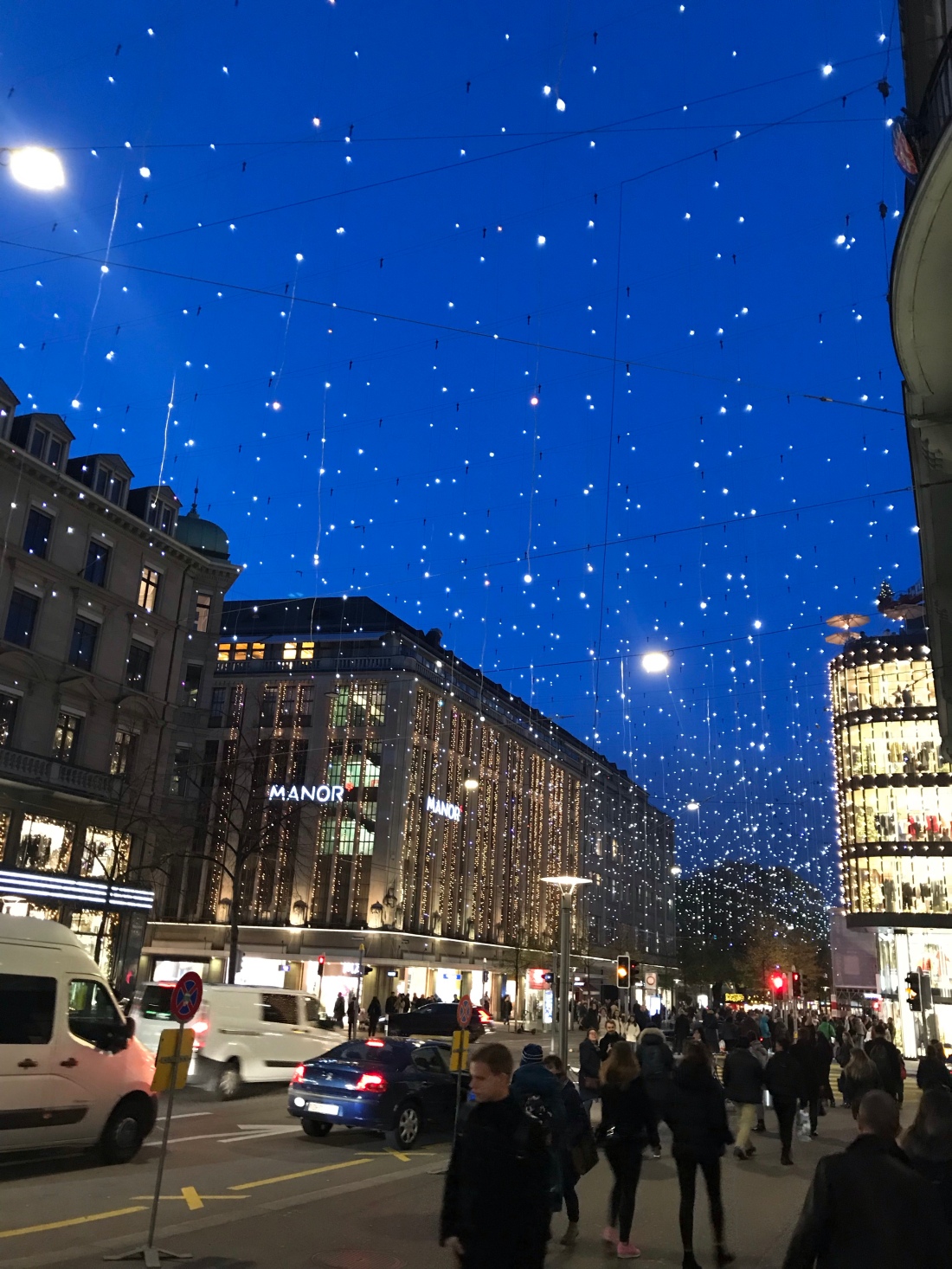 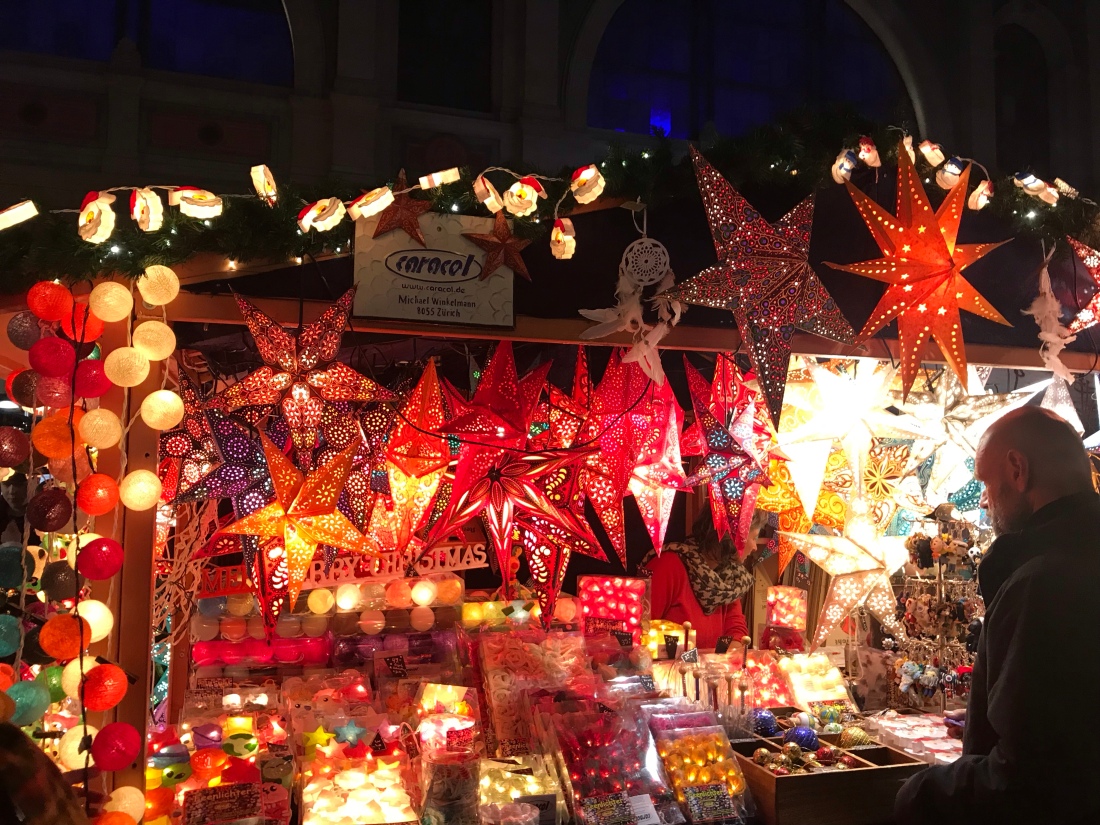