So, we took in reclining and standing Buddhas, Colonial Museum, Botanical Gardens, Monkey Beach, then drove on around some of the more rural parts of the island, inhabited mainly by Malay people.

Then we continued onto Kek Lok Si Temple, another Buddhist temple set into a steep hillside with a huge statue at the top of it (I think a female image this time? Certainly there were other female as well as male statues on the way up too) and more pagodas, gardens and so on on the way up, which was by a short funicular railway ride. 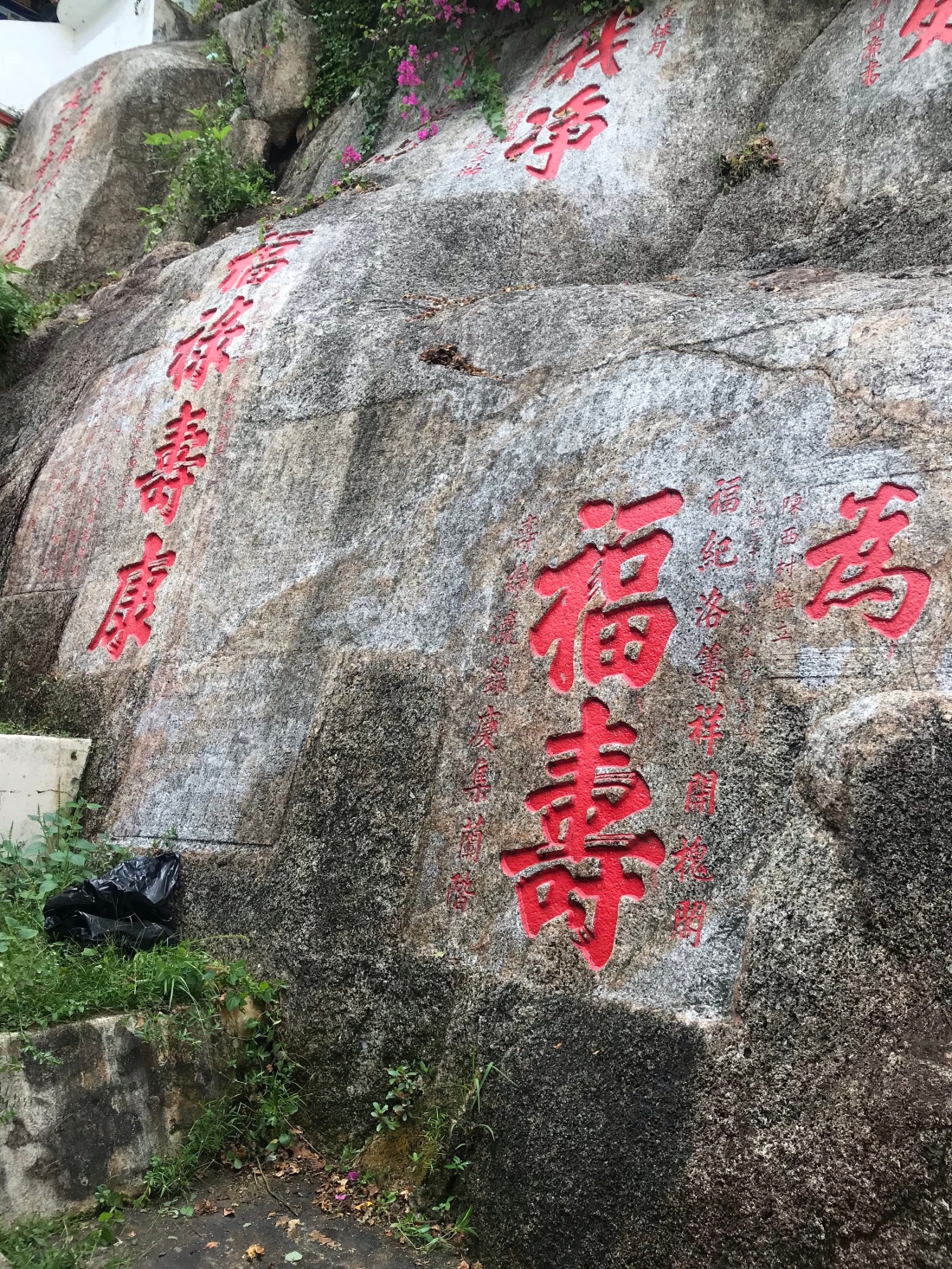 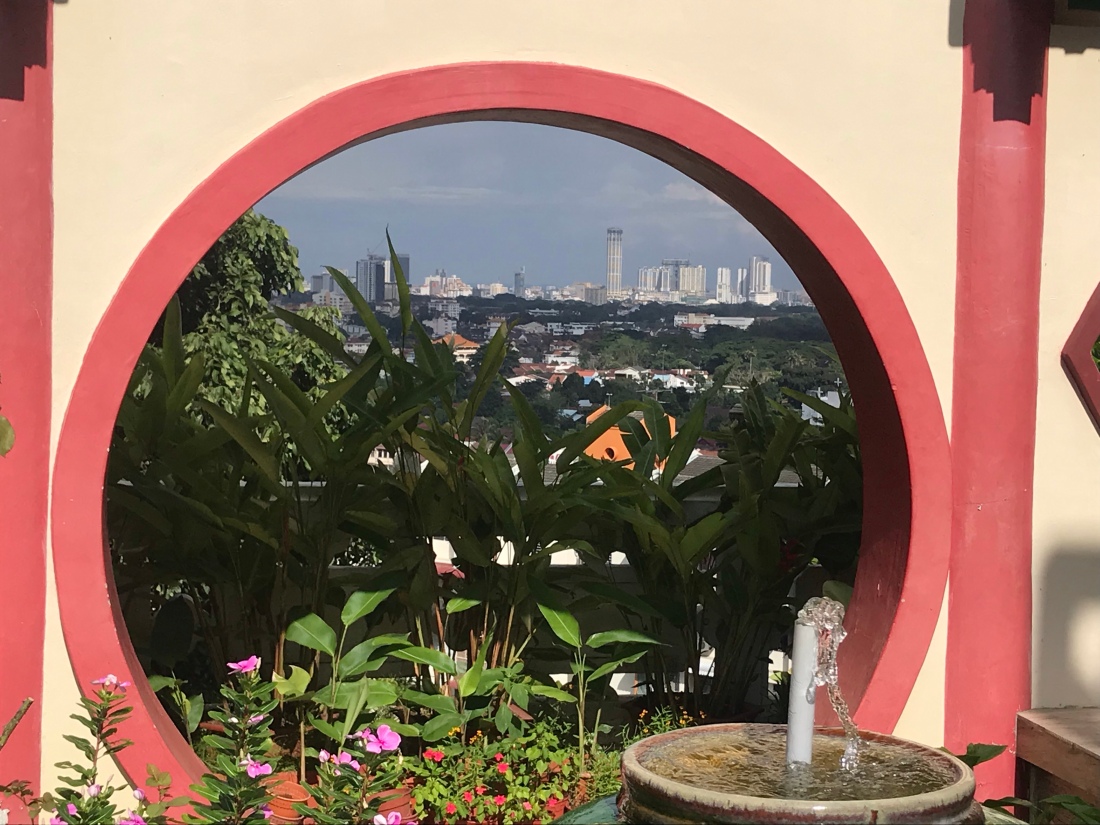 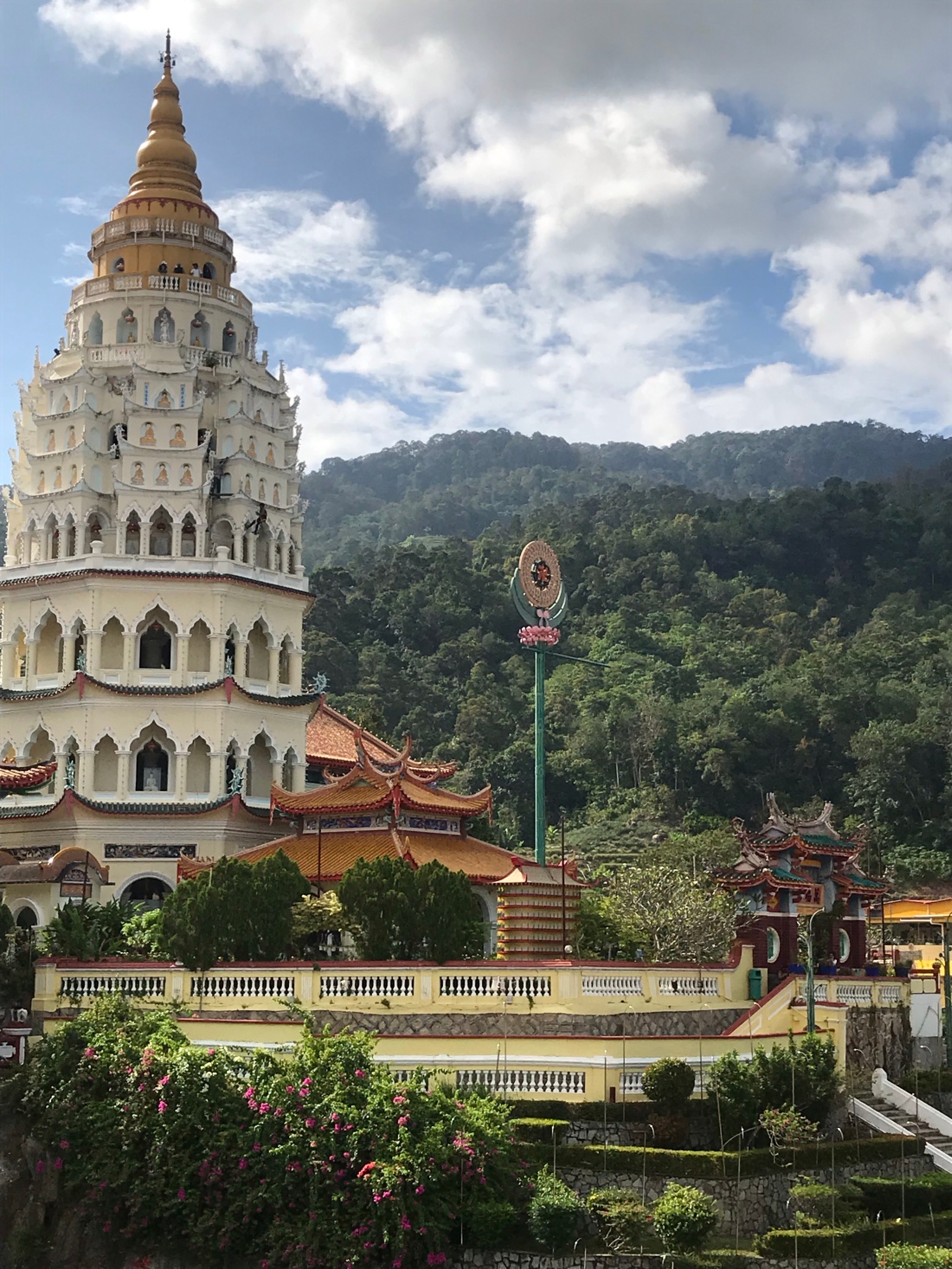 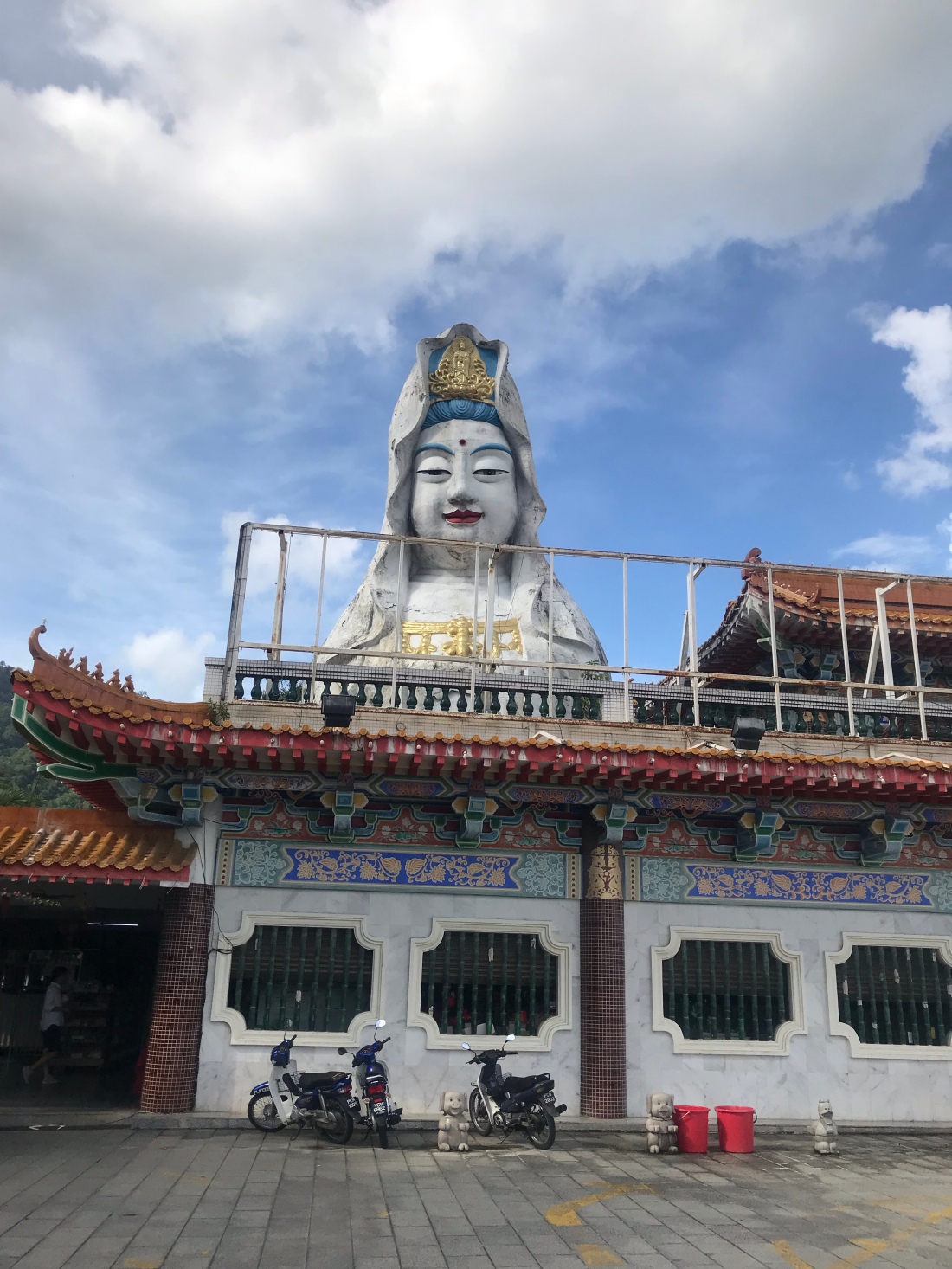 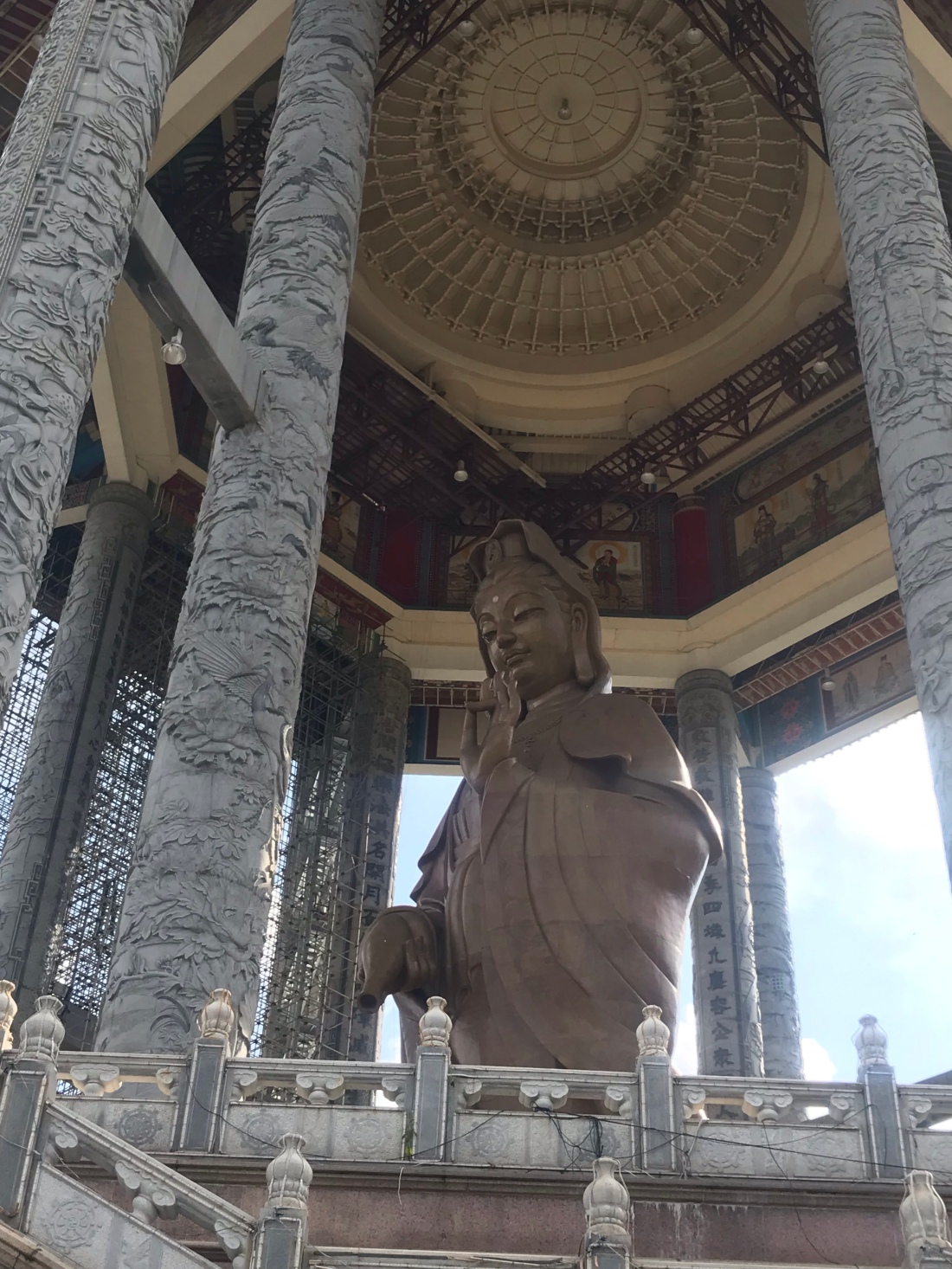 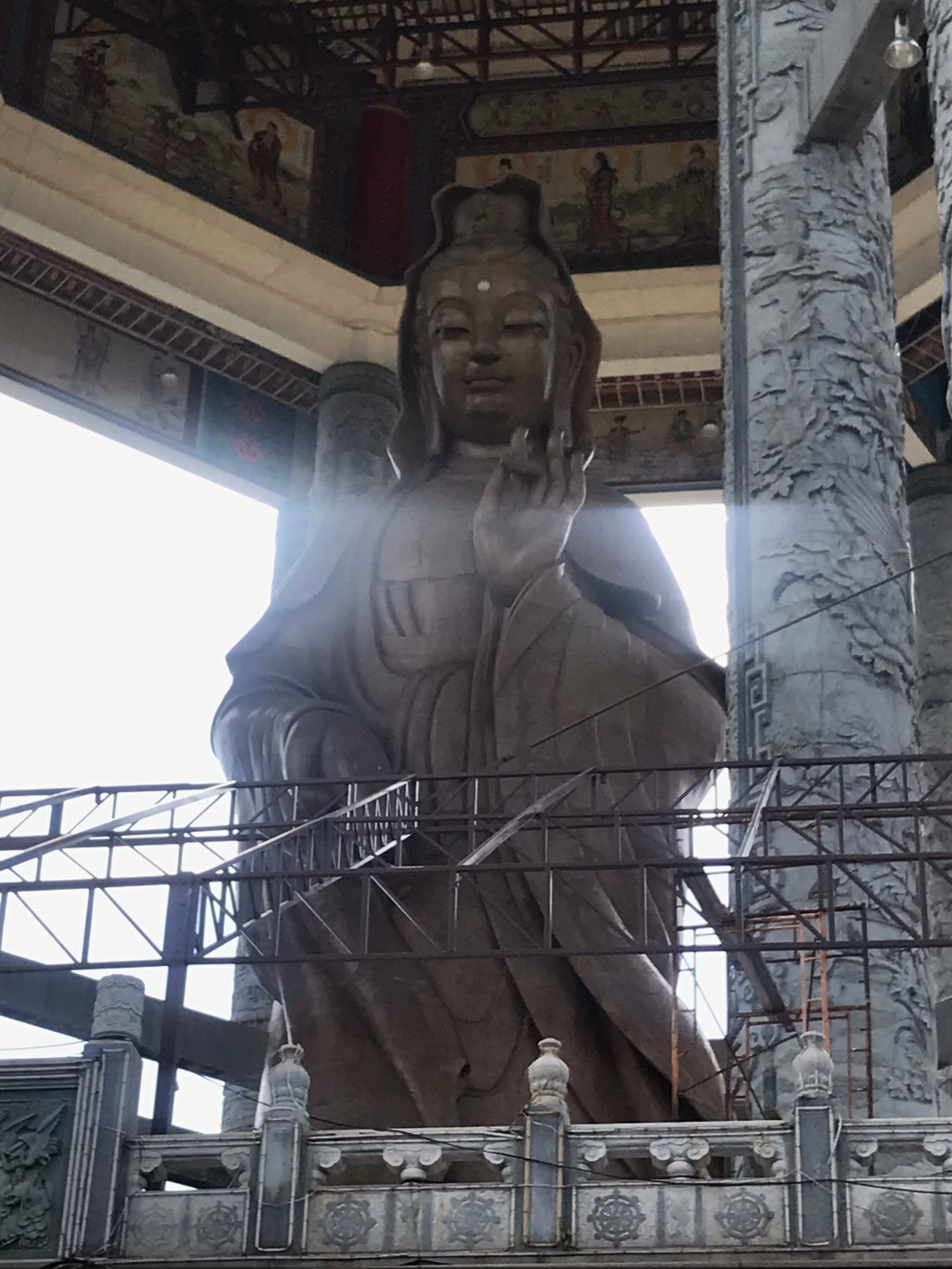 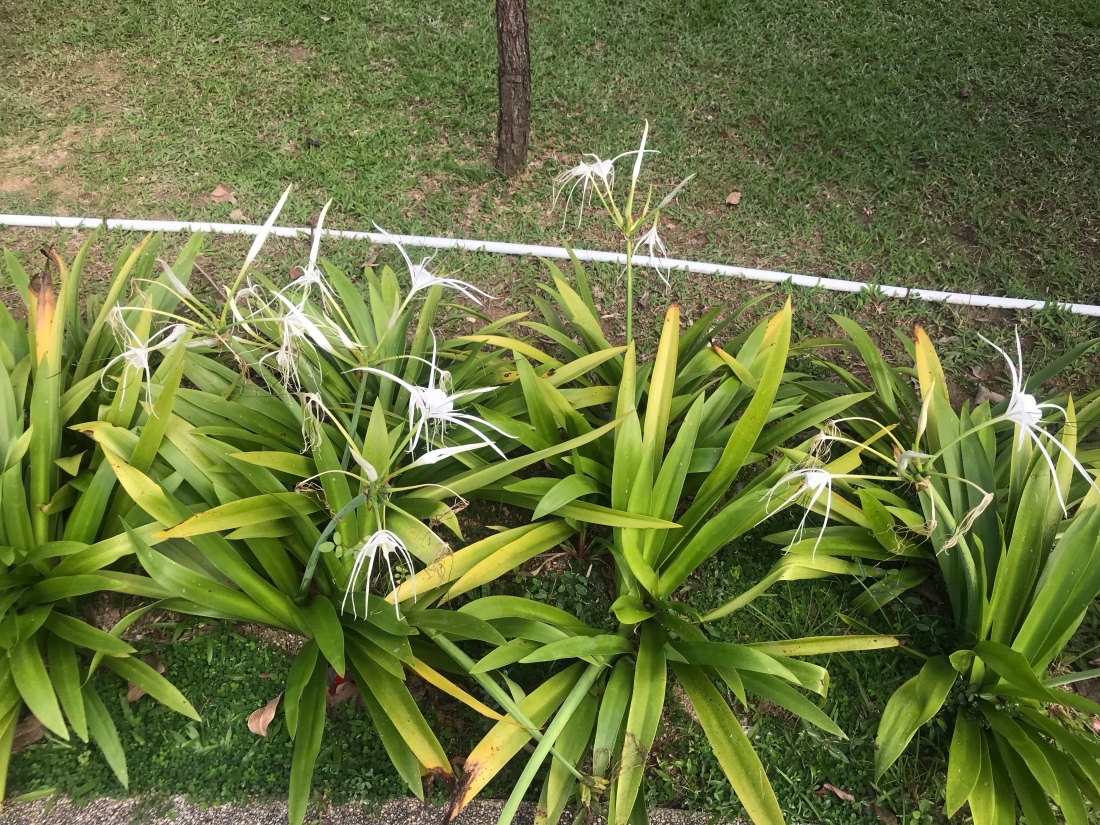 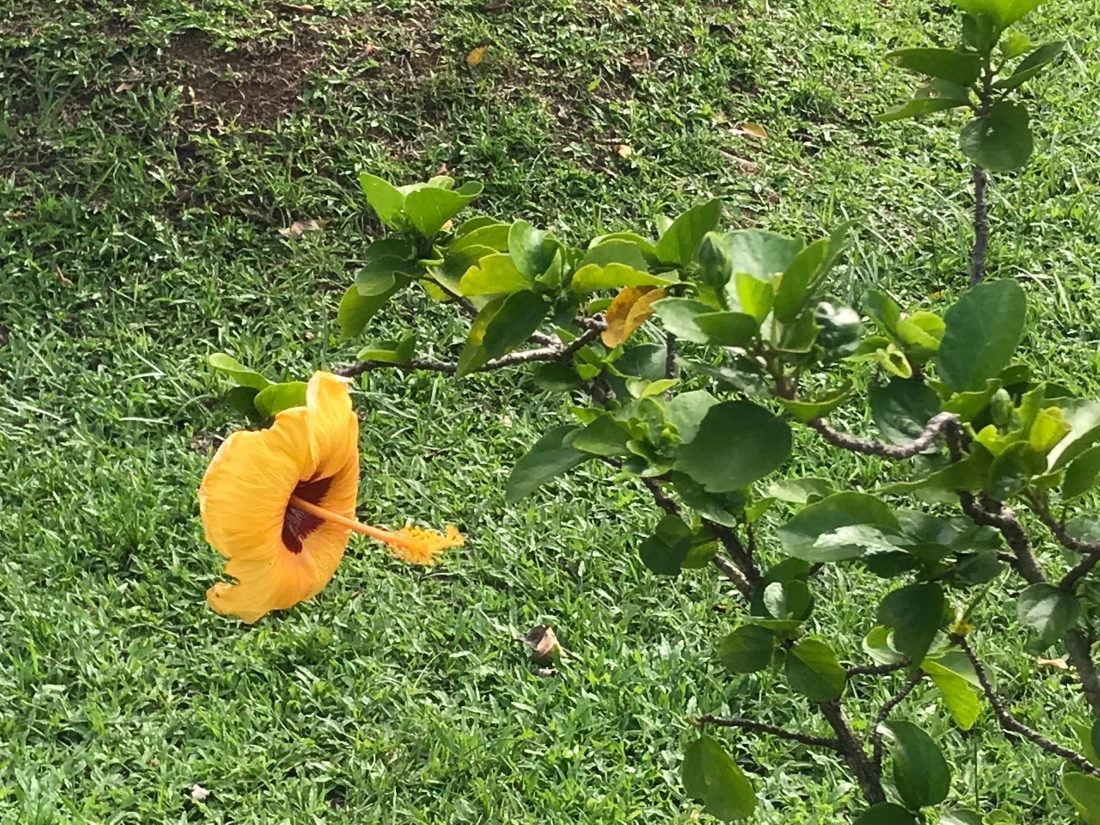 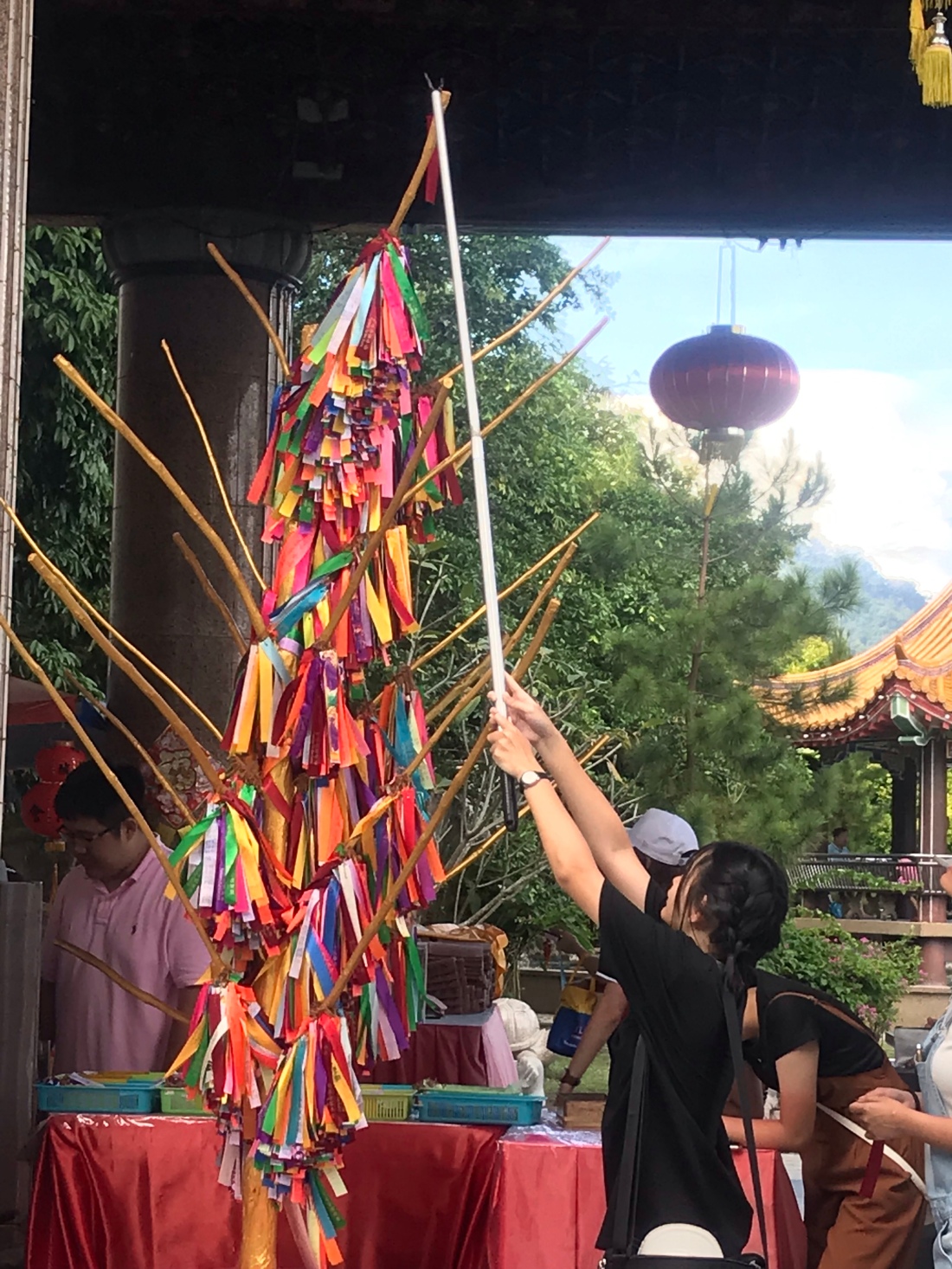 It looked like the whole enterprise was a victim of its own success:

Or maybe less a victim, more a beneficiary, as there was a huge area of extra building work going on: 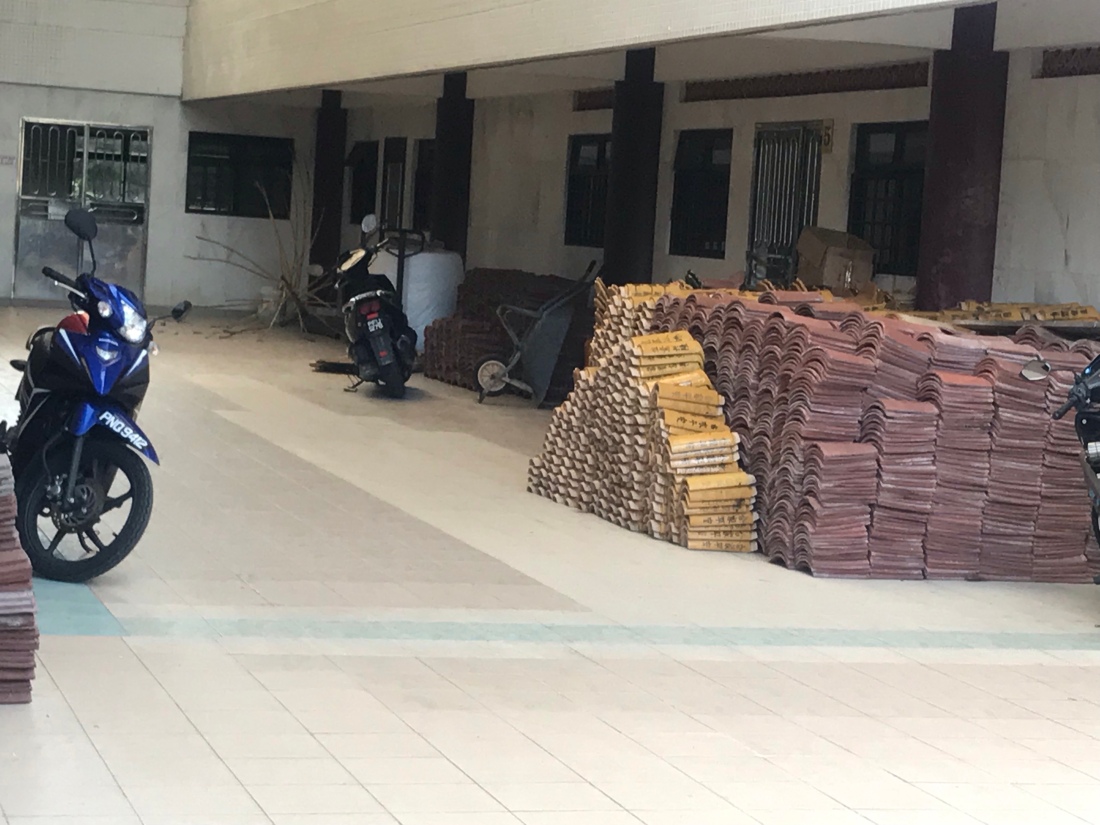 The tortoise/turtle is symbolic of longevity, so several were hiding around the place, including this guy:

There was a great view of the area from the top too:

Having seen this view, I wondered whether it would be worth paying the extra for the (very fast) funicular train ride up Penang Hill. I’m glad I did though. Turns out it’s much much higher. And as we know, I do like to find a high place to survey the new territory from.

Here’s Kek Lok Si from Penang Hill (you can just make it out just over halfway between my left ear and the edge of the photo):

I noticed the Hindus and Muslims had seen the Buddhists and raised them, siting a Hindu Temple and a Mosque at the top of Penang Hill: 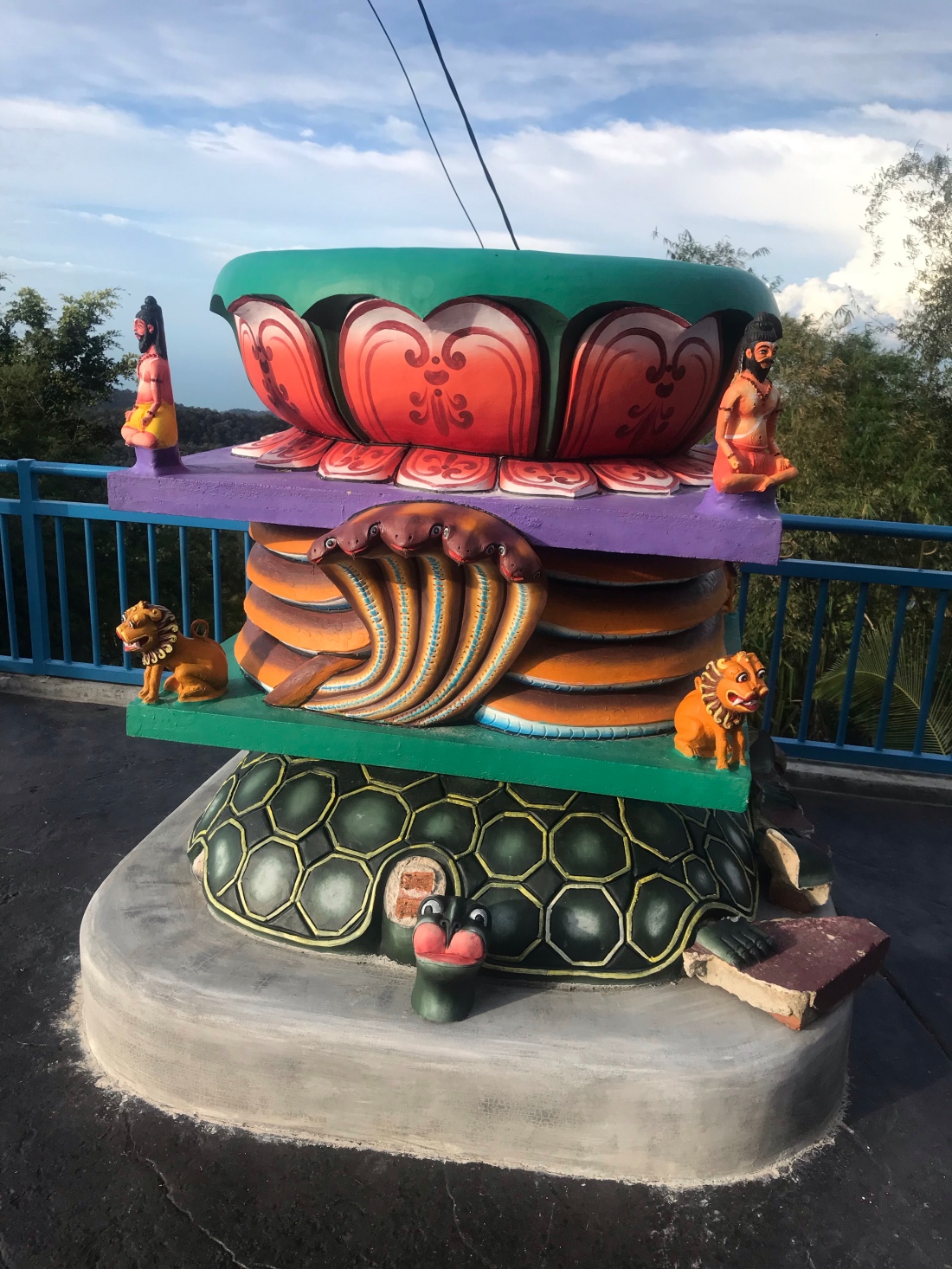 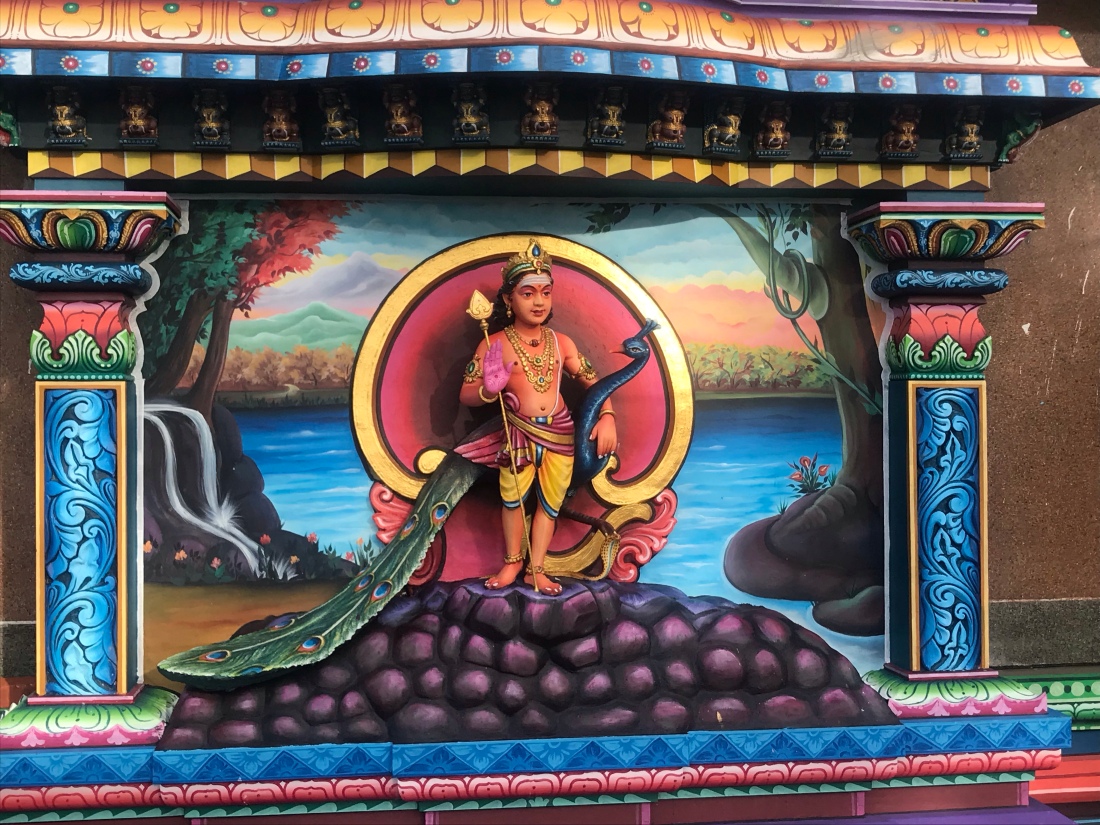 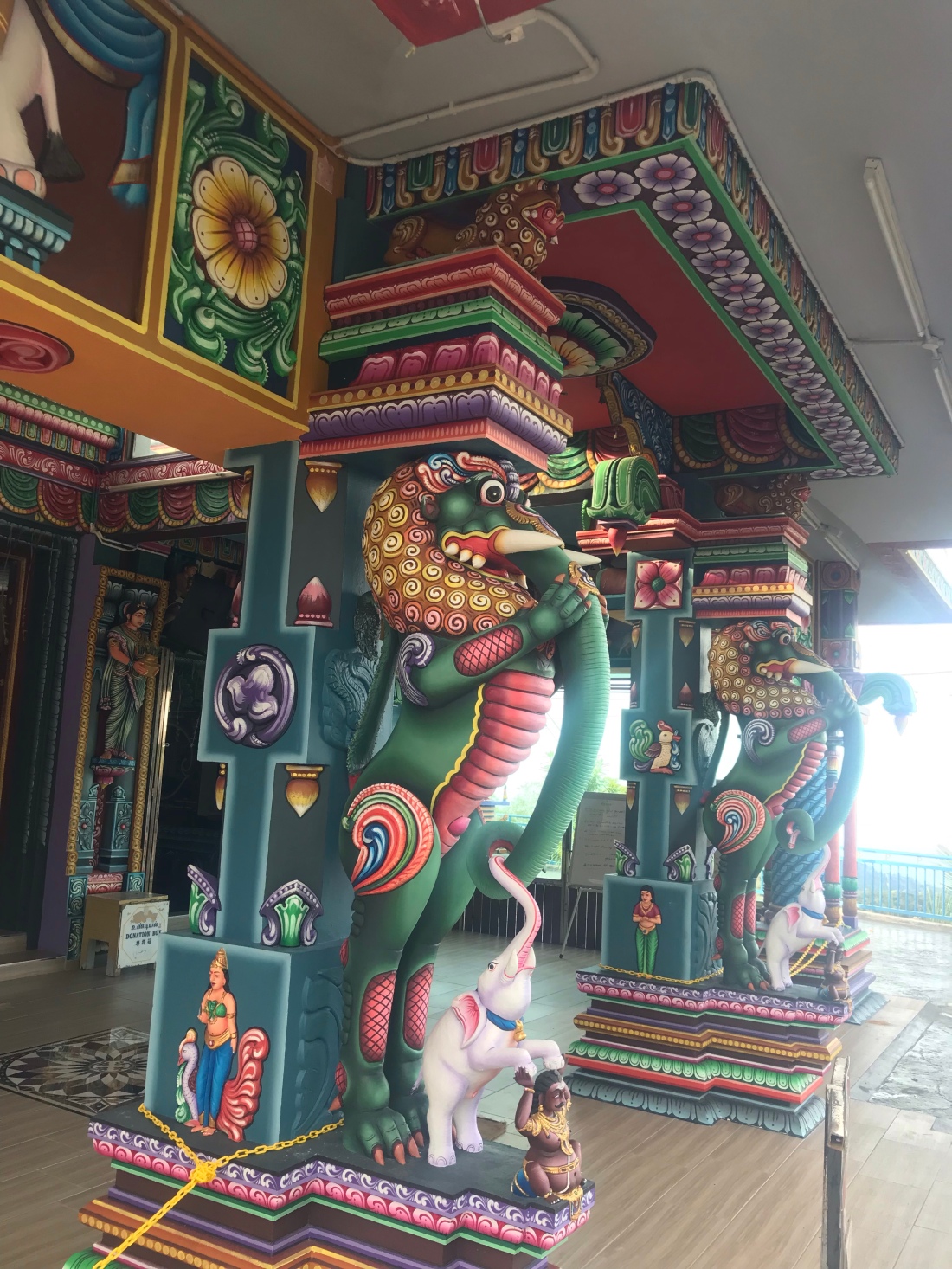 I found a guy selling ice cream here… guess what flavour this was…? (It’s actually a mix of two flavours…): 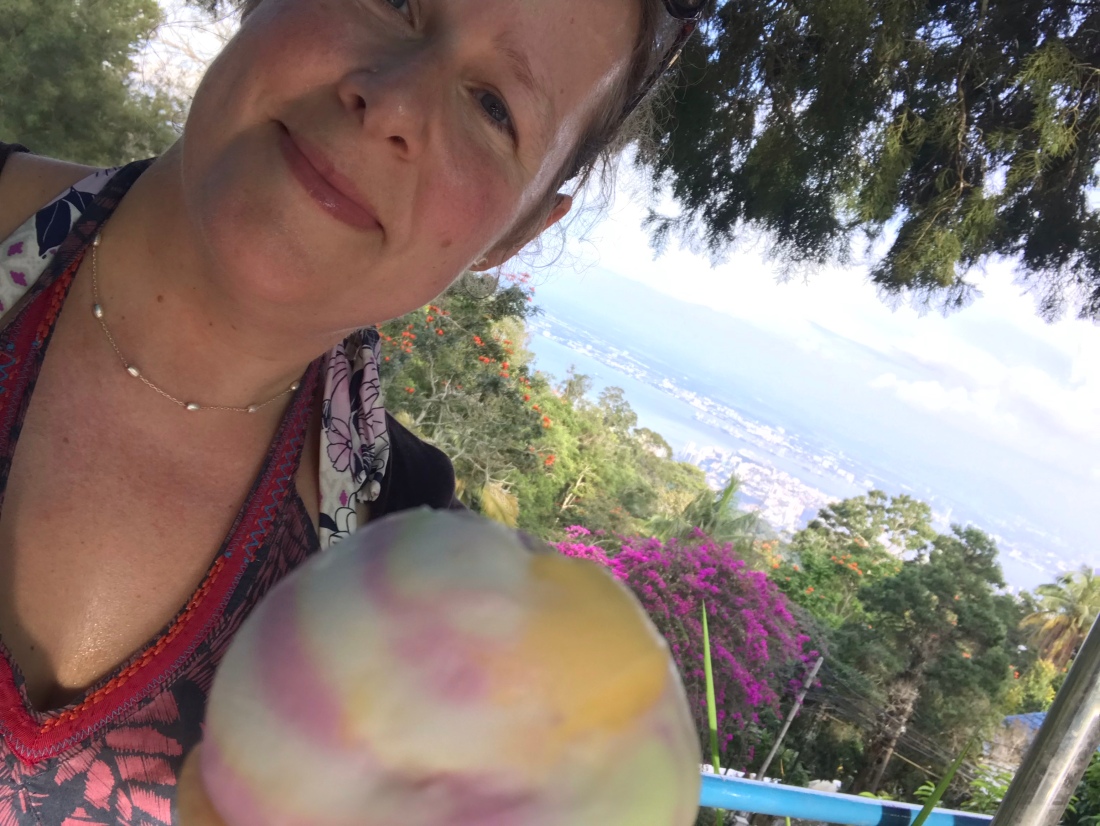 Monkeys played on the roof of the waiting area while we waited for the train to arrive to take us back down:

Raj was nursing the notion that it’d be great if I was able to see the sunset from the summit of Penang Hill. For that to work, he earned himself an extra hour and a half’s work, but I must say I was glad to pay him for it, although I was exhausted by the time we returned to the hotel at about 8pm. Yes, all the posts entitled “Penang” i-iv were all one day. I really did need a driver for that to work. I’m very thankful I had the means to bring it off. Just about.

By the time it came to eating I just wanted something light and fibrous and very definitely veggie and nearby. So I found Leaf (thank goodness for Trip Advisor), still open, where I obtained this delicious vegan meal for a pittance:

Then collapsed into bed, wondering why I was so very stiff having been driven around in a lovely air conditioned car all day and gone swimming. Too much for one day really. If I’d had longer than two days, I would have spent the following day just recovering. But…