At one time, cloves were more valuable even than gold here, as the place was on trading routes for spices. The ship below was made entirely of cloves threaded together. As with much of this colonial era stuff, designed to impress people with the wealth of the owner.

Welcome to the Colonial Penang experience. The British “founded” Penang (never mind the Malay people and others who were here long before) on shaky ground to start with. Captain Francis Light got the Sultan of Kedah to give the British East India Company the Island in return for British military assistance (which never eventuated, because Light had acted without consent of his superiors) and a fairly paltry sum of money (6000 Spanish dollars / year). Covering ourselves in glory as always (not). George Town was established in 1786 and named in honour of King George III, and became the first British settlement in Southeast Asia, and a springboard for further expansion of the empire in the region.

When the Sultan realised Light had done the dirty on him, he tried to attack. Light tried to persuade him to stand down, but failed. Light had access to too much military might, and managed to defeat the Sultan.

In 1800, Sir George Leith, the first Lieutenant Governor of the island, managed to gain a further strip of land from the Sultan. In return, the annual payment to the Sultan became 10000 Spanish dollars. Apparently, every year, the Malaysian Federal Government still pays Kedah 10000RM as a symbolic gesture. And the British government pays nada. Hmmm.

But, business flourished and there was a lot that was good about the British influence here, bringing beautiful building design techniques and materials, and music and so on, which remain today. Local people are prodigiously proud of their island and of George Town, I think. Penang is one of the most well developed areas in Malaysia, apparently, although George Town itself is a UNESCO world heritage site, so can’t be as modernised.

During World War II, the British withdrew from Penang, leaving it vulnerable to attack. (When the going gets tough…) In December 1941 the Japanese bombed the island heavily, killing and wounding numerous civilians. The British had secretly evacuated all the European citizens in Penang beforehand as well. From December 1941 until September 1945, Penang was under Japanese occupation, which was a brutal regime, particularly for the Chinese, thousands of whom were massacred. On 2nd September 1945 at the end of the war, the island was recaptured by the British, finally.

A positive view of the British was never reestablished after all that betrayal, and Penang finally gained independence from the British Empire in 1957. The local people here seem very philosophical about it all now though, and they still all call me “Madam”. But I bet they wouldn’t trust a British businessman further than they could throw him!

The opulence displayed in a lot of the museums in Penang was not actually British owned. Rather it was owned by Chinese tradesmen (Baba) who married Malay wives of high social standing (Nyonya), and built on their existing fortunes (the phrase “Baba Nyonya” is used a lot here to describe these beautiful and socially important couples). It was in their interest to keep in with the British, so they adopted a lot of things like British clothes and also at great cost imported British (and European) made building materials, stained glass windows, trumpet vases, furniture, you name it, for their mansions. 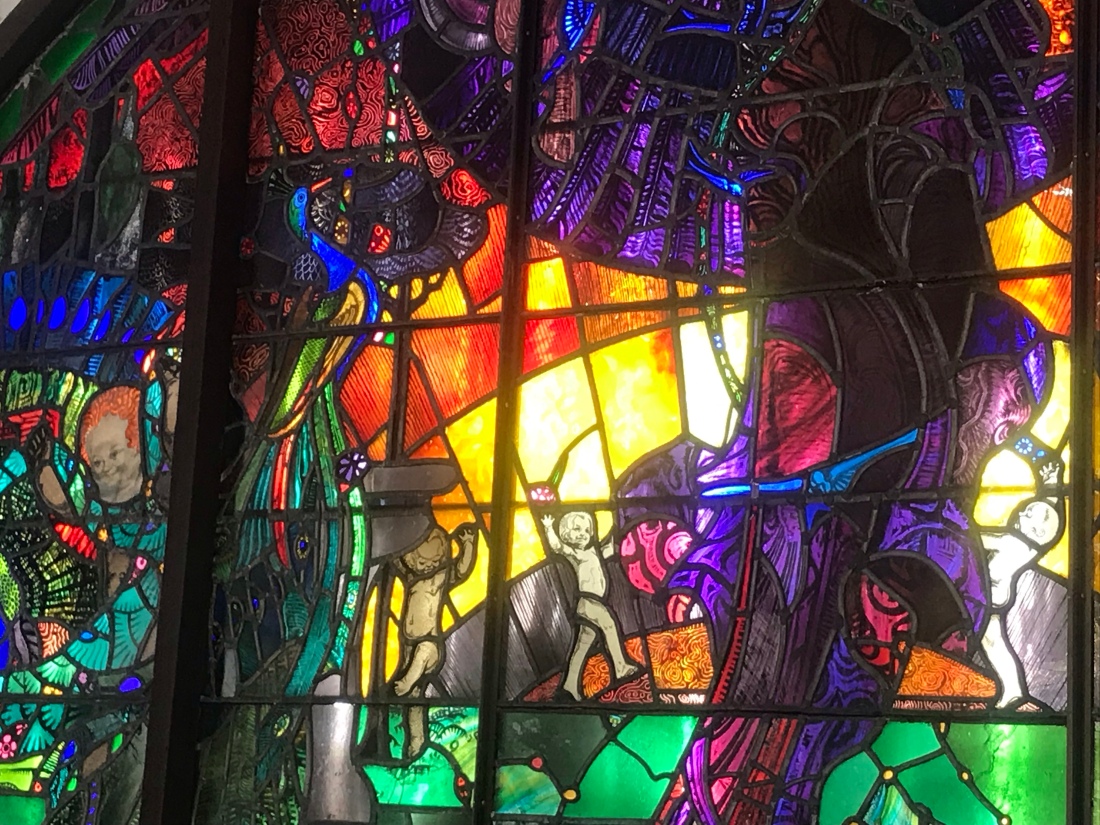 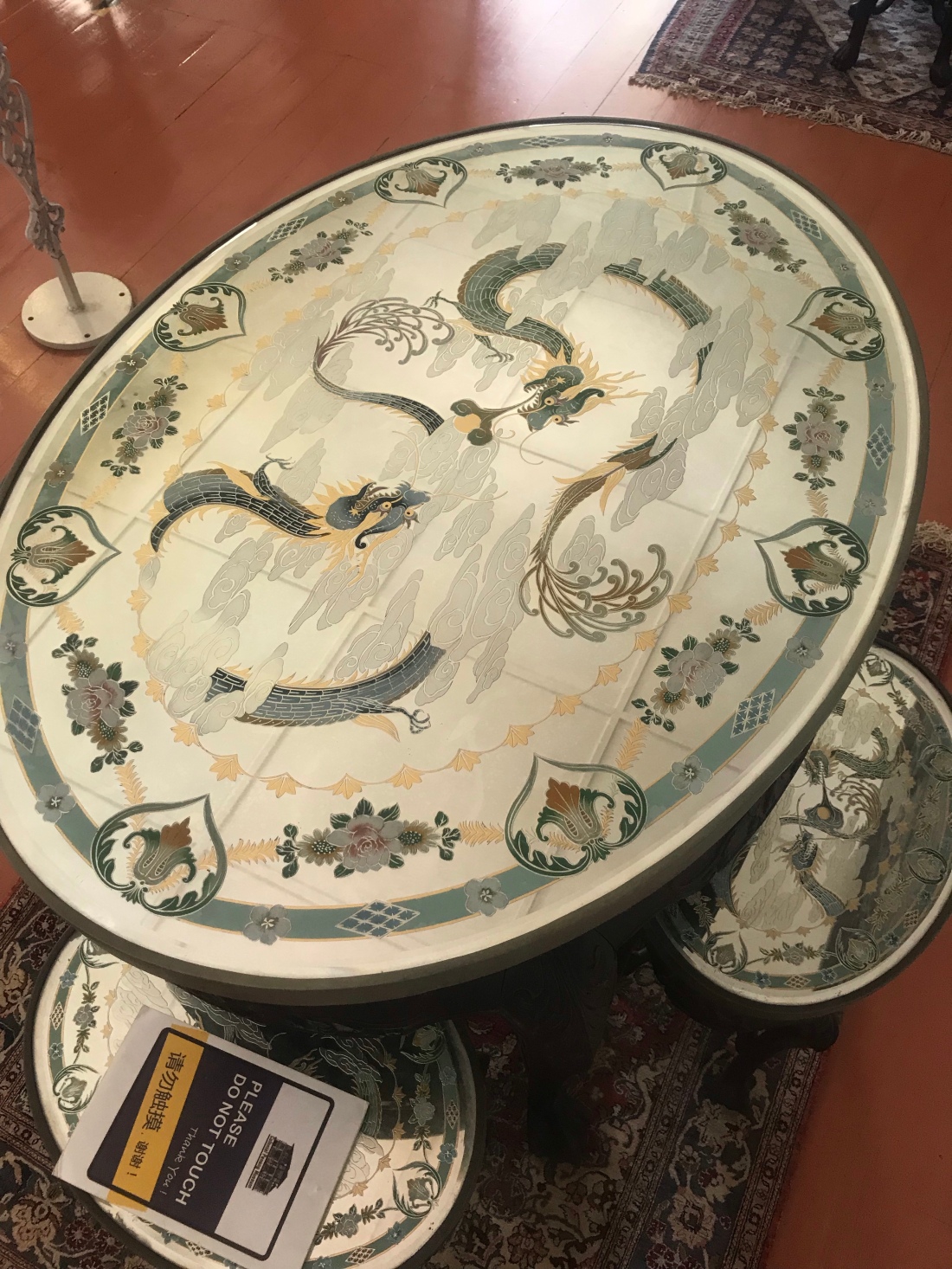 Captain’s desk made for the captain of a ship, including lots of hidden compartments for confidential documents as well as beautifully intricate carving: 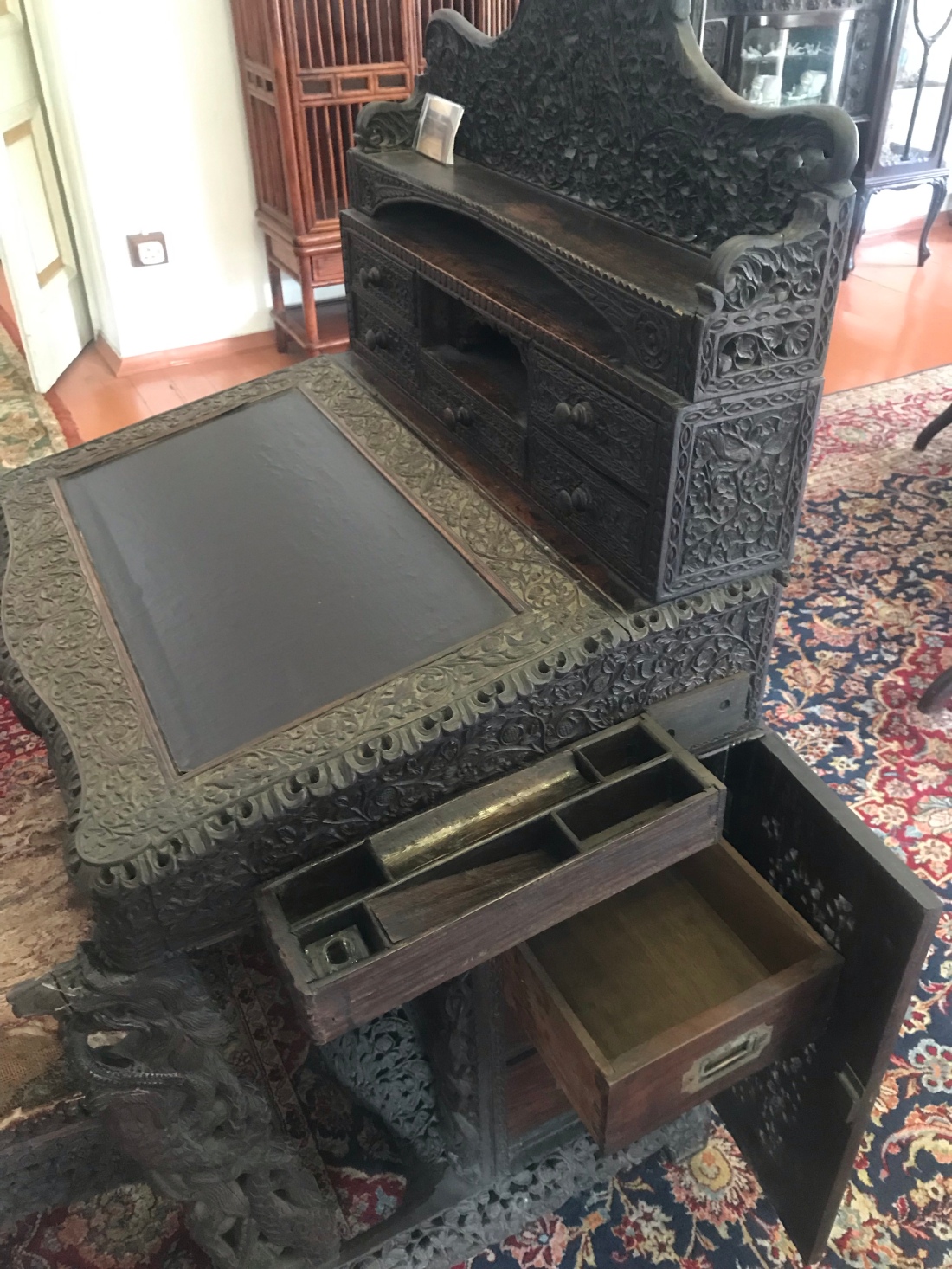 Scrolls carved onto the arms of this chair for ladies, so the gentleman can pull it back for them as my guide demonstrated here. Ah, there are some things I’m sad we’ve lost…! 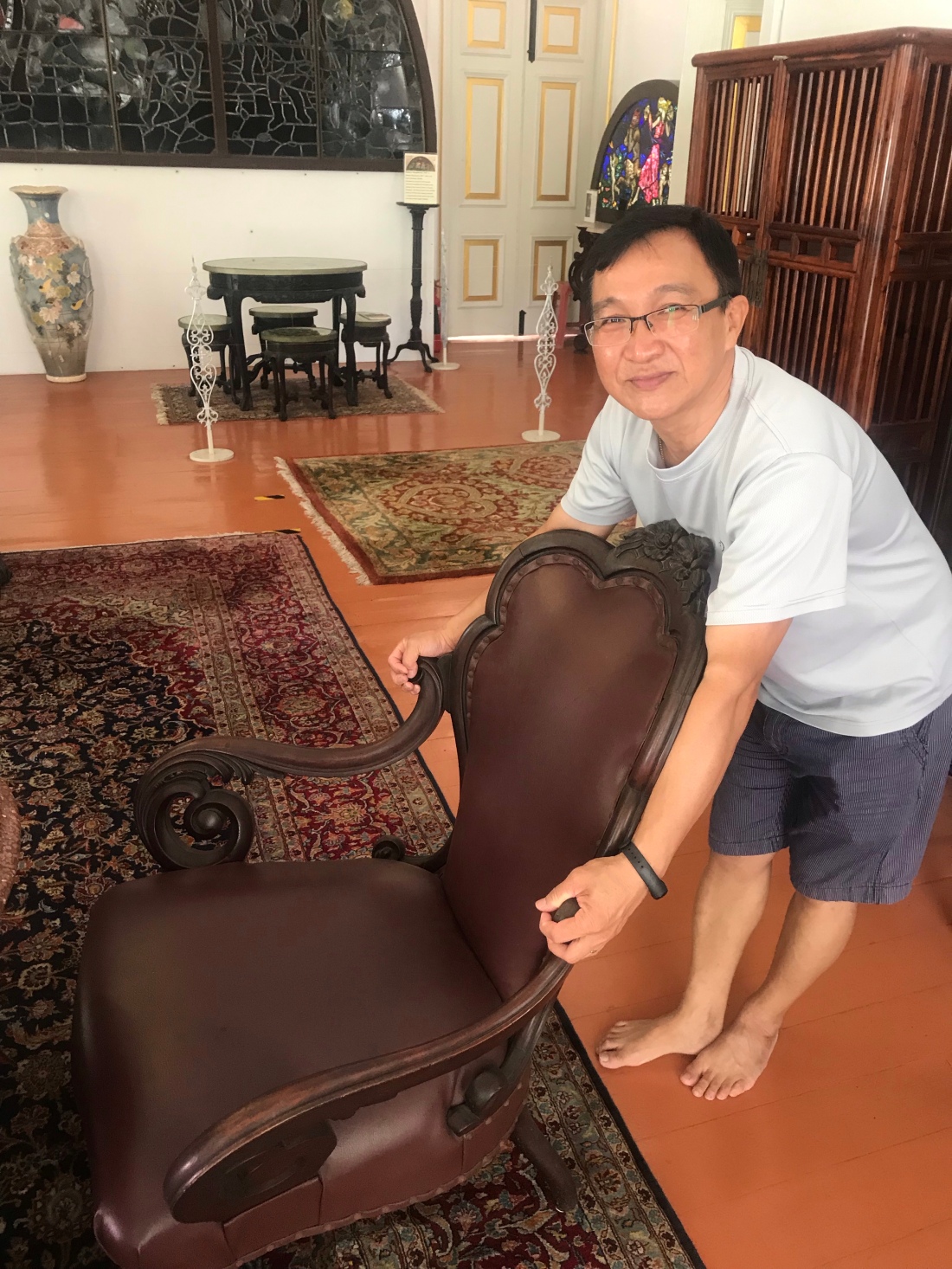 Here are some Philip’s light bulbs. They have been working since 1920!! Only one of them out of six has stopped working. So how come it took so long for us to get low energy light bulbs? That would last? 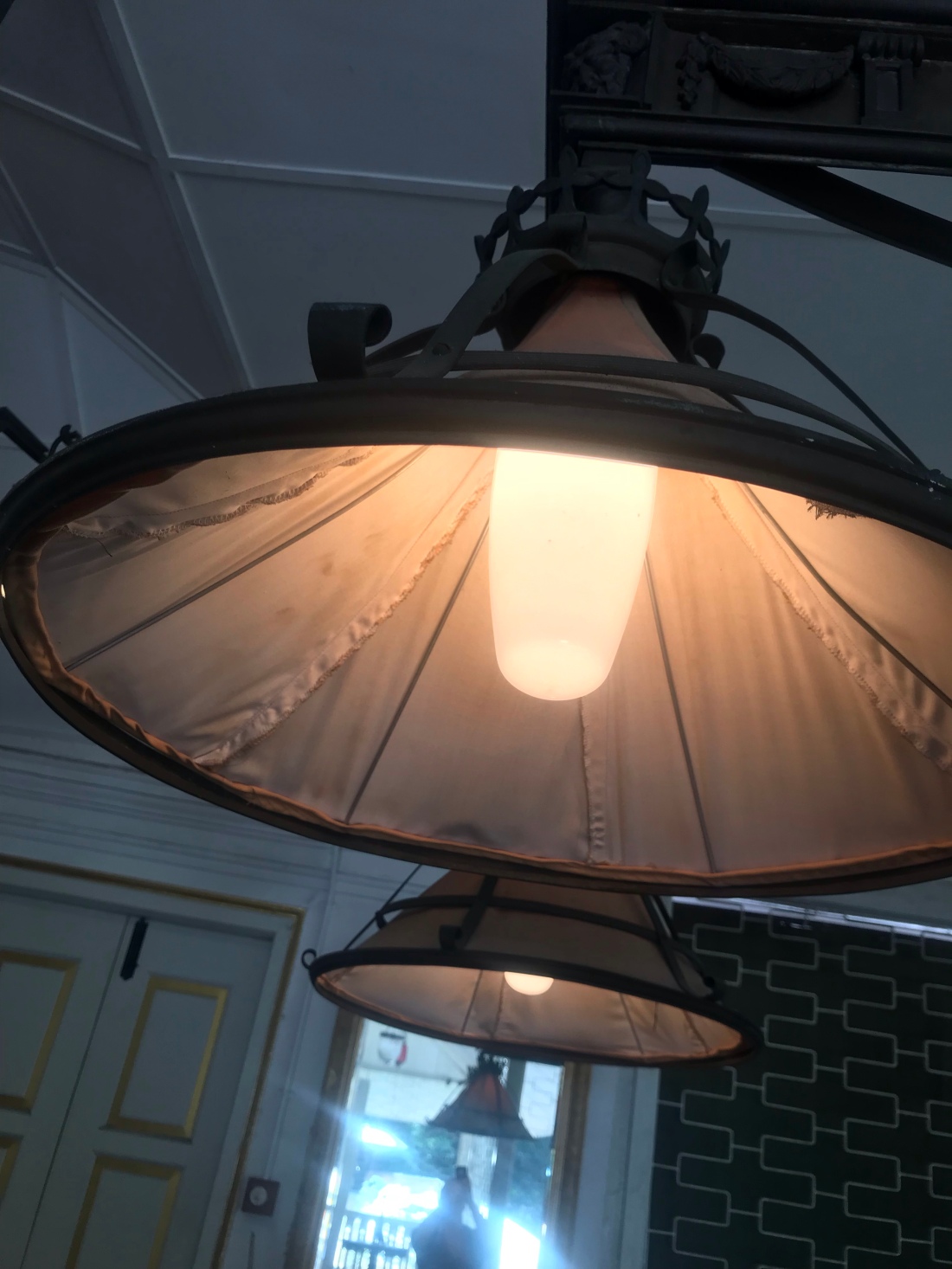 This bookcase is made with rare yellow flowering pear tree wood. Apparently, this wood now costs $3000USD/ounce! Everyone can touch it because that only makes it shinier.

This painting is from the early 1900s I think. One of the first to use really bright colours. It would have been pretty shocking at the time I guess, but also very fashionable.

An ornate set for drinking liqueur. The shot glasses are so small because the liqueur would have been over 60% alcohol!

Do you reckon I could fit in here…? Hmmm…? 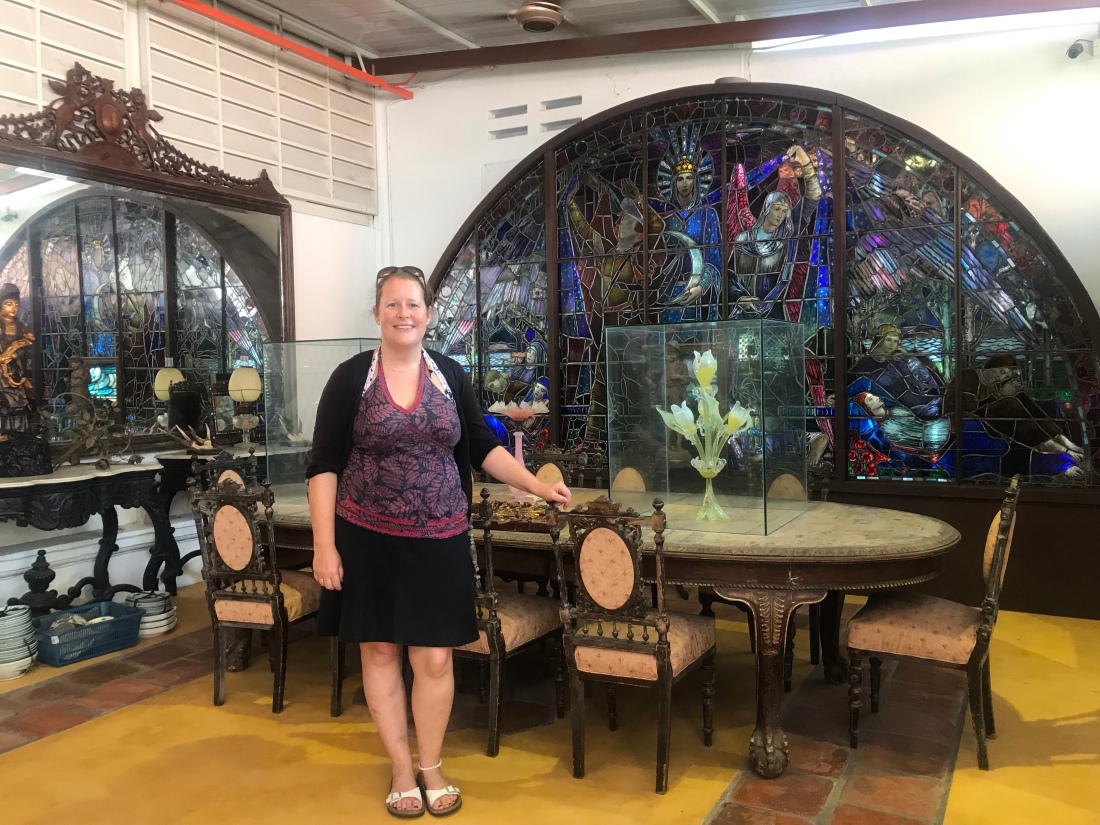 The owner of this mansion had a photo taken of his sleeping daughter, but then realised the photo wouldn’t last forever. So he sent it to Italy to have a marble sculpture made of her by a master sculptor and shipped back over to Penang. As you do. 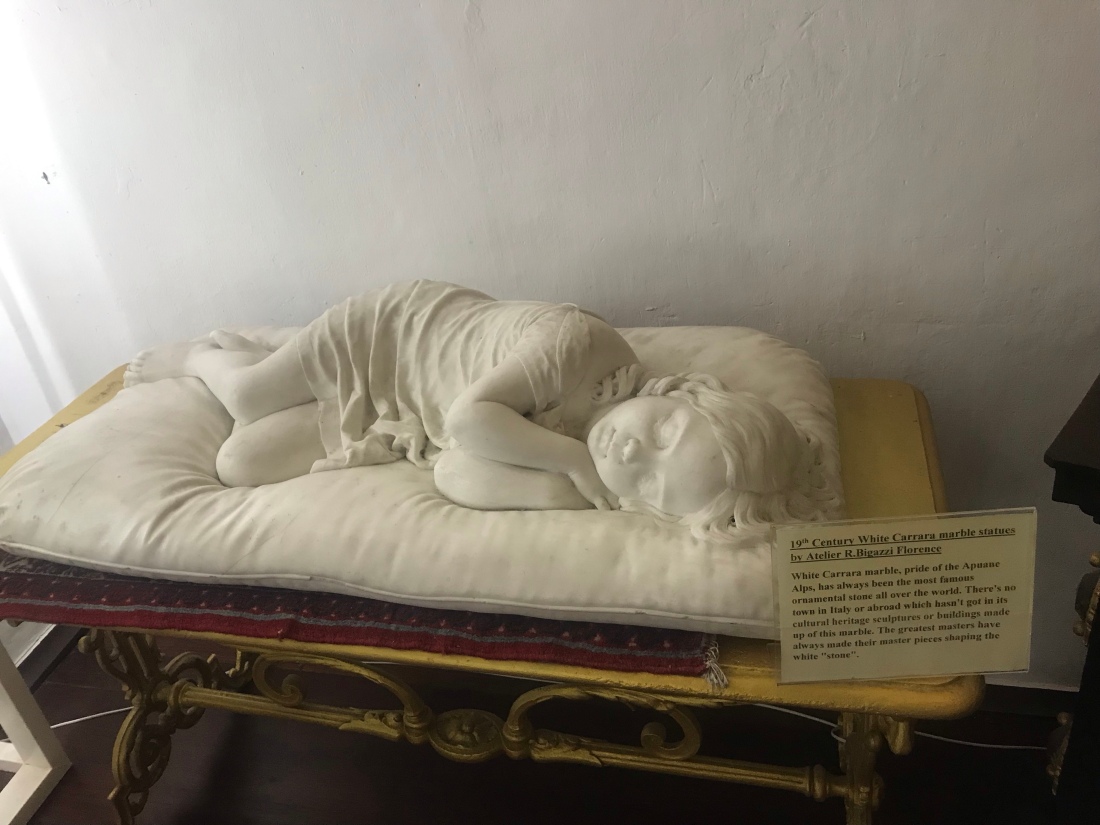