I hadn’t completely realised this, but I managed to book myself onto two tours that were quite food related one after the other today! (It’s a good job I did all that cycling yesterday!)

For my first tour, the Guide, Hoang picked me up from my rather out of the way homestay on a motorbike, then we met up with two other people and his colleague who would translate for them, all three on pedal bikes. Firstly we went to a family home where we saw how rice was traditionally harvested and refined, and had a chance to have a go at it ourselves. 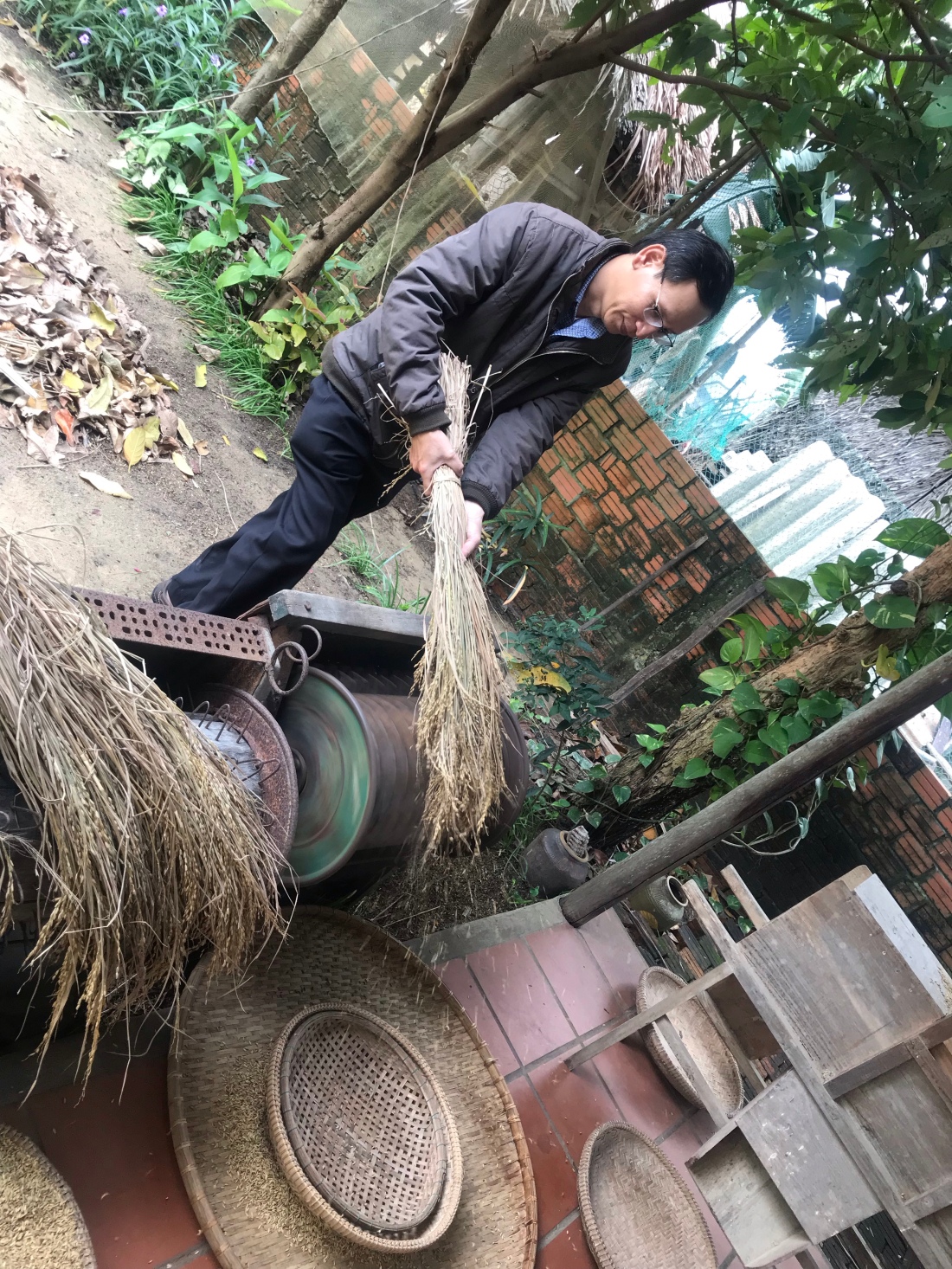 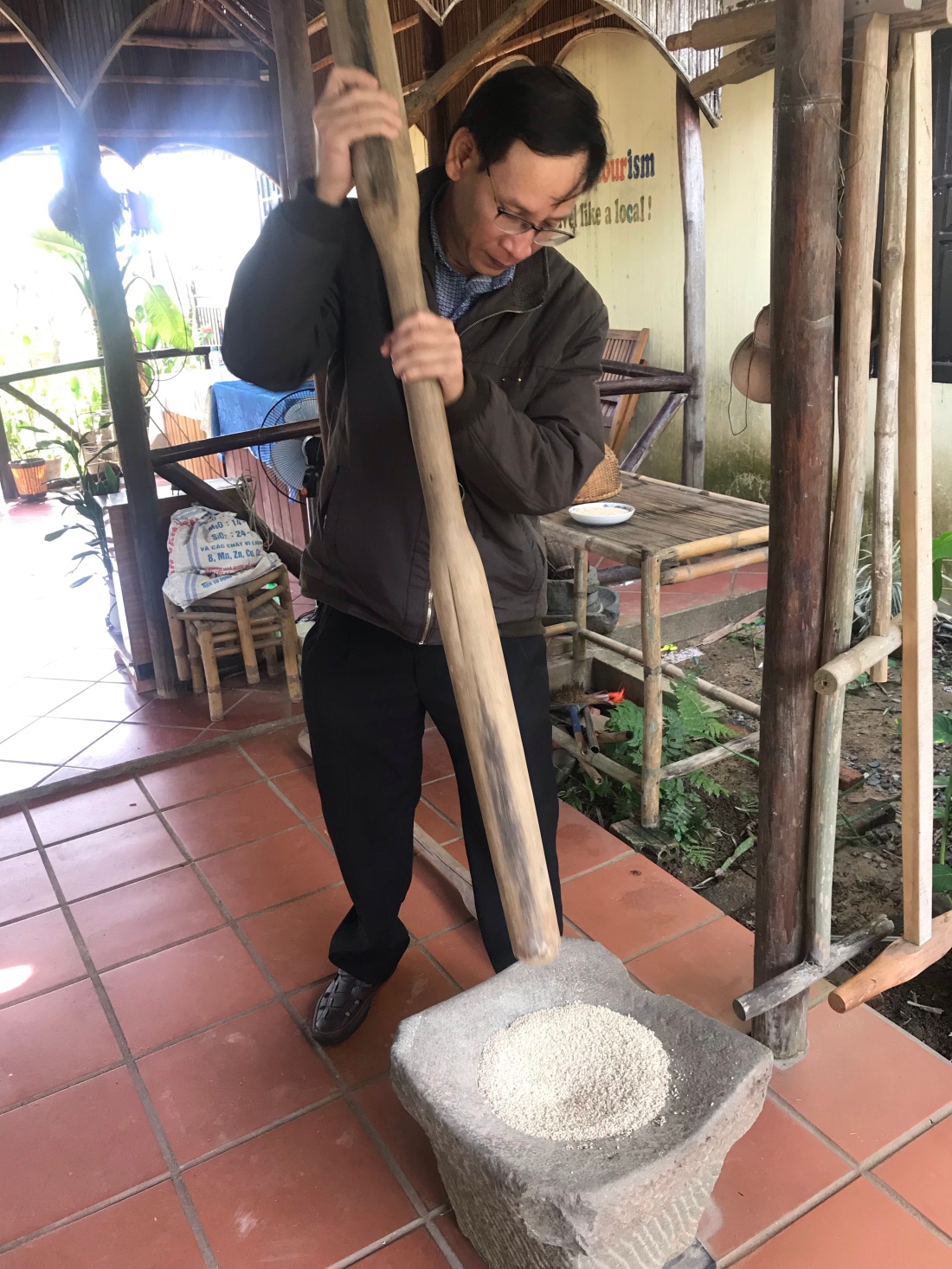 We continued on to Tra Qué Vegetable Village, famous in Vietnam for the excellent quality of its vegetables, which are so good partly because of the natural qualities of the soil in that area (which is an island on what I think is part of the river delta area) and partly because of the people’s growing techniques, which include planting small areas of different crops next to each other so that predatory insects are discouraged. It makes for a beautiful patchwork across what is effectively a huge community allotment: 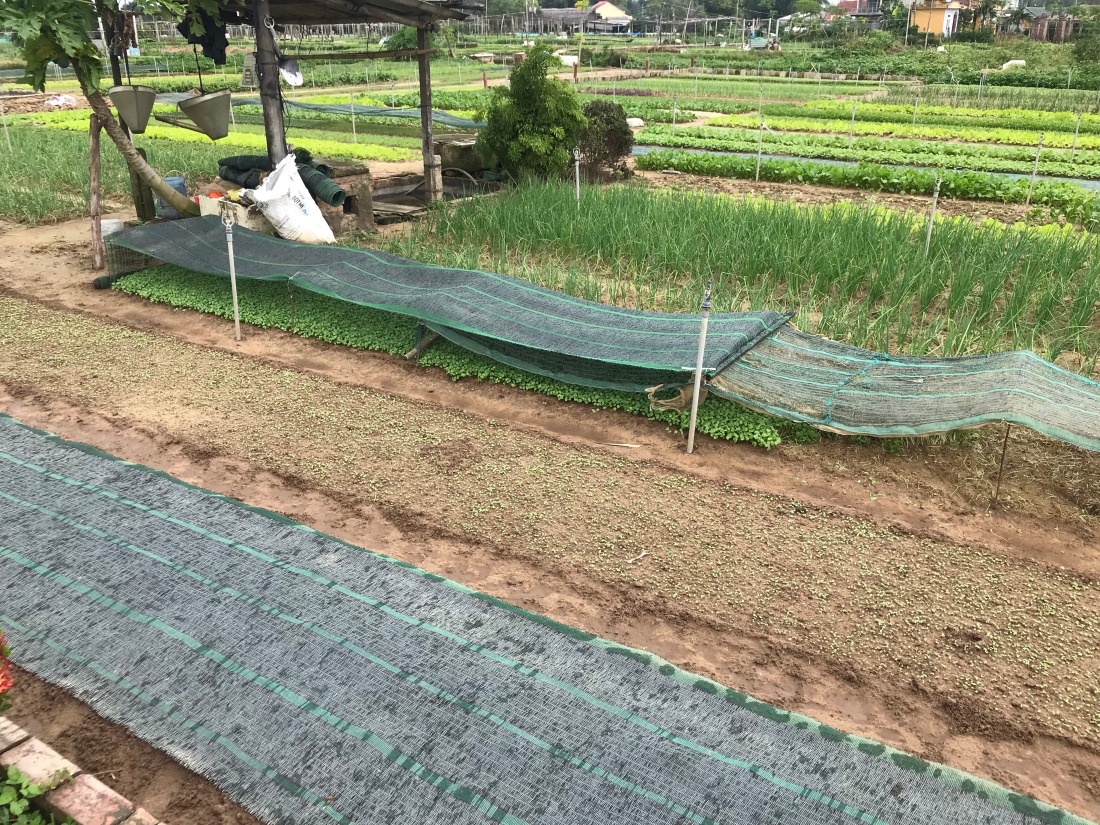 They also plant flowers to occupy the insects and distract them from the crops.

Then we went to the Tra Qué Organic Restaurant, where we saw a cookery demonstration of how to make rice pancakes from the rice flour we had just learnt about, and then had a delicious and very full lunch, sampling many local dishes made from the produce of the area. 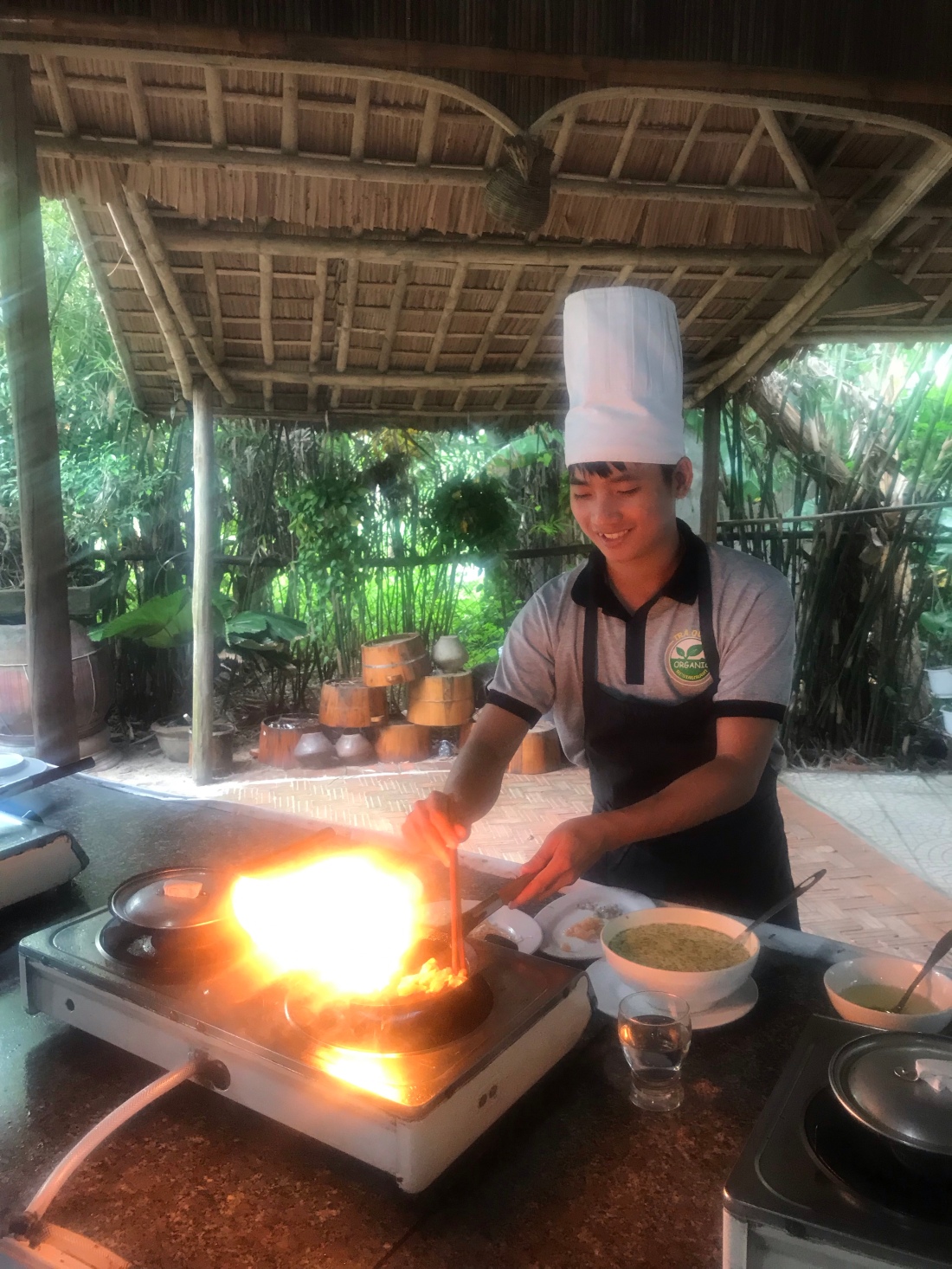 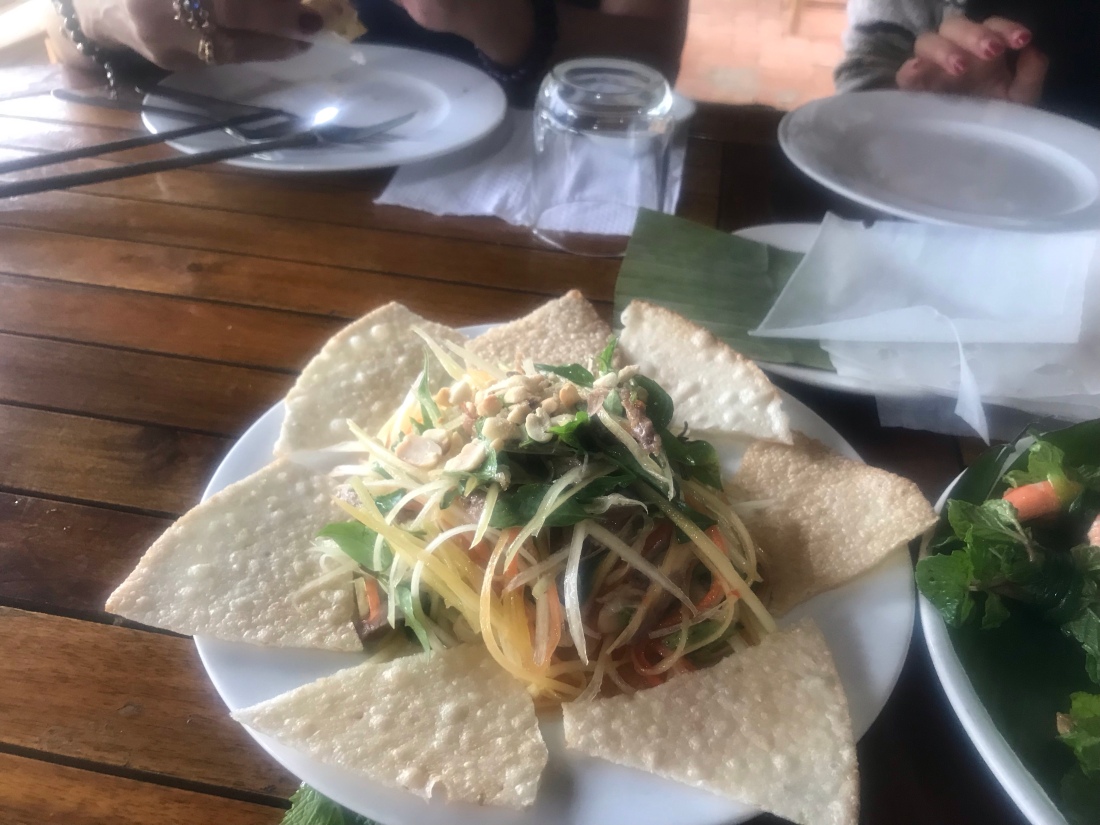 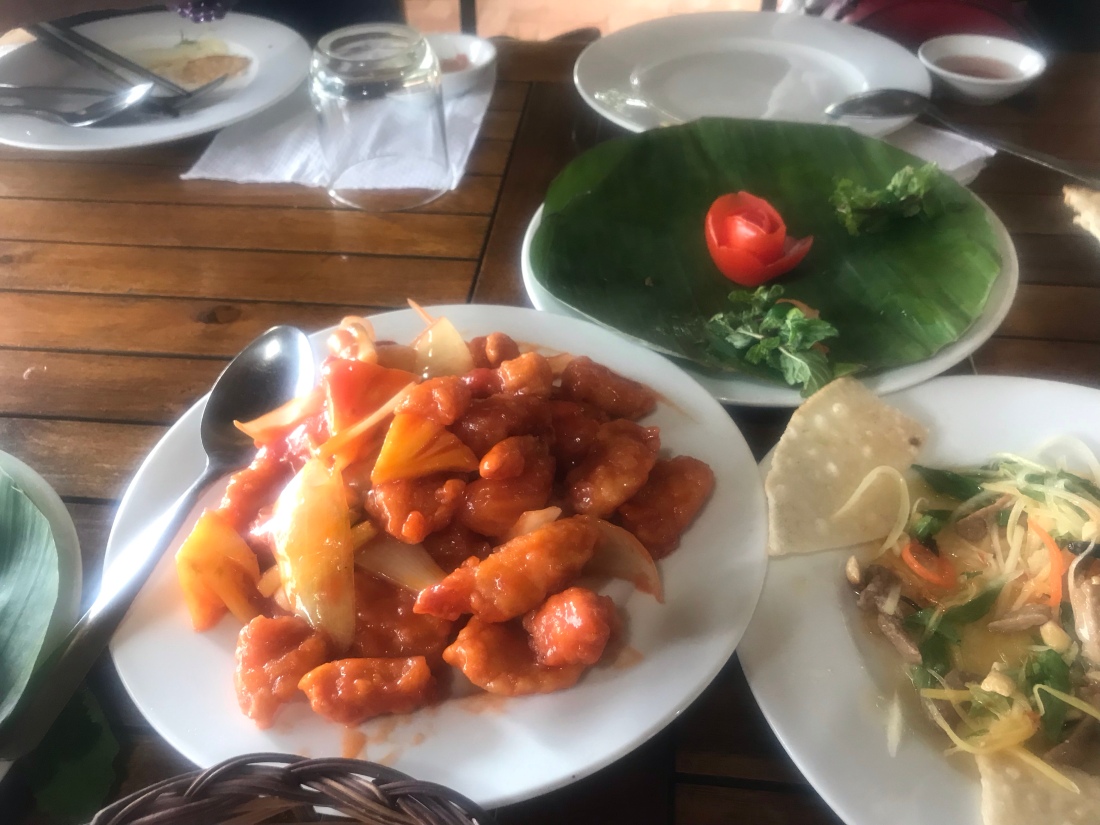 Finishing with a deliciously cooked banana:

I was only due at my next tour meeting point about an hour and a half later, and Hoang had agreed to drop me off there. My plan was simply to enjoy wandering around the area until it was time to meet them, but he kindly offered to take me on a motorbike tour of the town, and then drop me off there in time for my next tour.

Hoang’s English was extremely good, and he was very knowledgable about the area but also about Vietnamese history and culture more generally, so it was a real treat to hear him talk about many things, and show me parts of Hoi An that I couldn’t have seen any other way.

Here were some of the sights we saw: 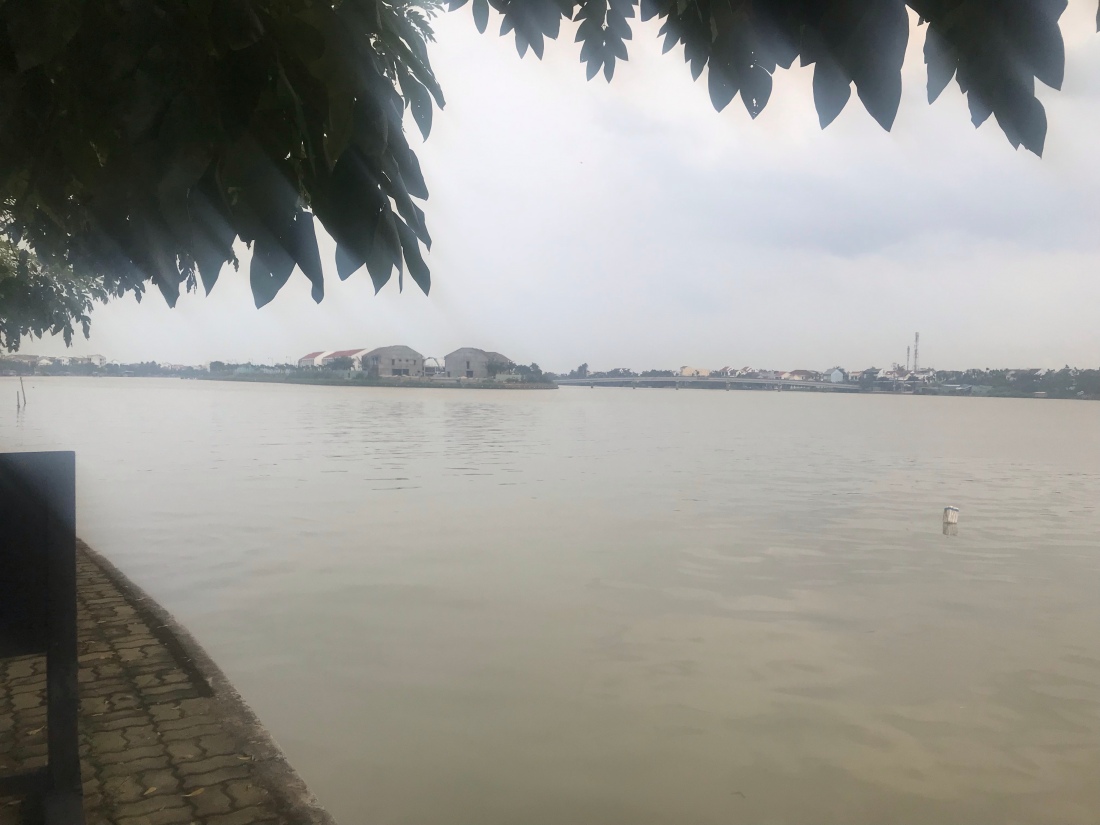 Japanese covered bridge, joining the Japanese area with the Chinese area of the town. In ancient times, Hoi An was the main port in Vietnam and a stop off point for merchants on the Silk Road. Soon Japanese and Chinese merchants asked the government if they could come and live here, and they were allowed to build their own quarters of the city. 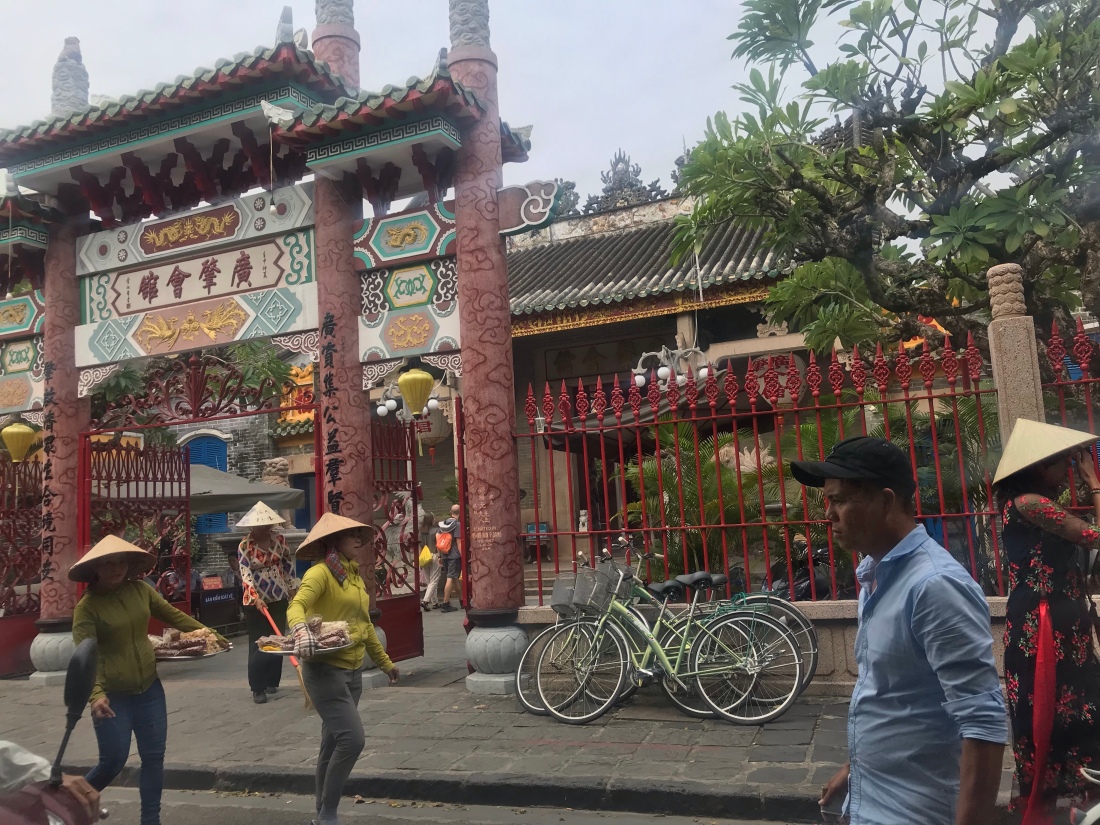 I asked Hoang about whether there were any Buddhist temples in Hoi An, as I have various friends who are Buddhist or who practise Buddhist meditation. He explained that mostly the Buddhist temples/monasteries were built in the mountains or in out of the way places that would be quieter. But he drove me to one on a quiet edge of Hoi An, which was extraordinary. It is a big functioning monastery. I don’t know how many monks live here, but they wear orange and have shaved heads. Volunteers who work in the gardens wear simple brown clothes. It felt like a very prayerful place, but was also very opulent. Local Buddhists pay money and offer gifts to help with the upkeep of the monastery and grounds. Every year the paintwork is redone to keep it looking so fresh and colourful. 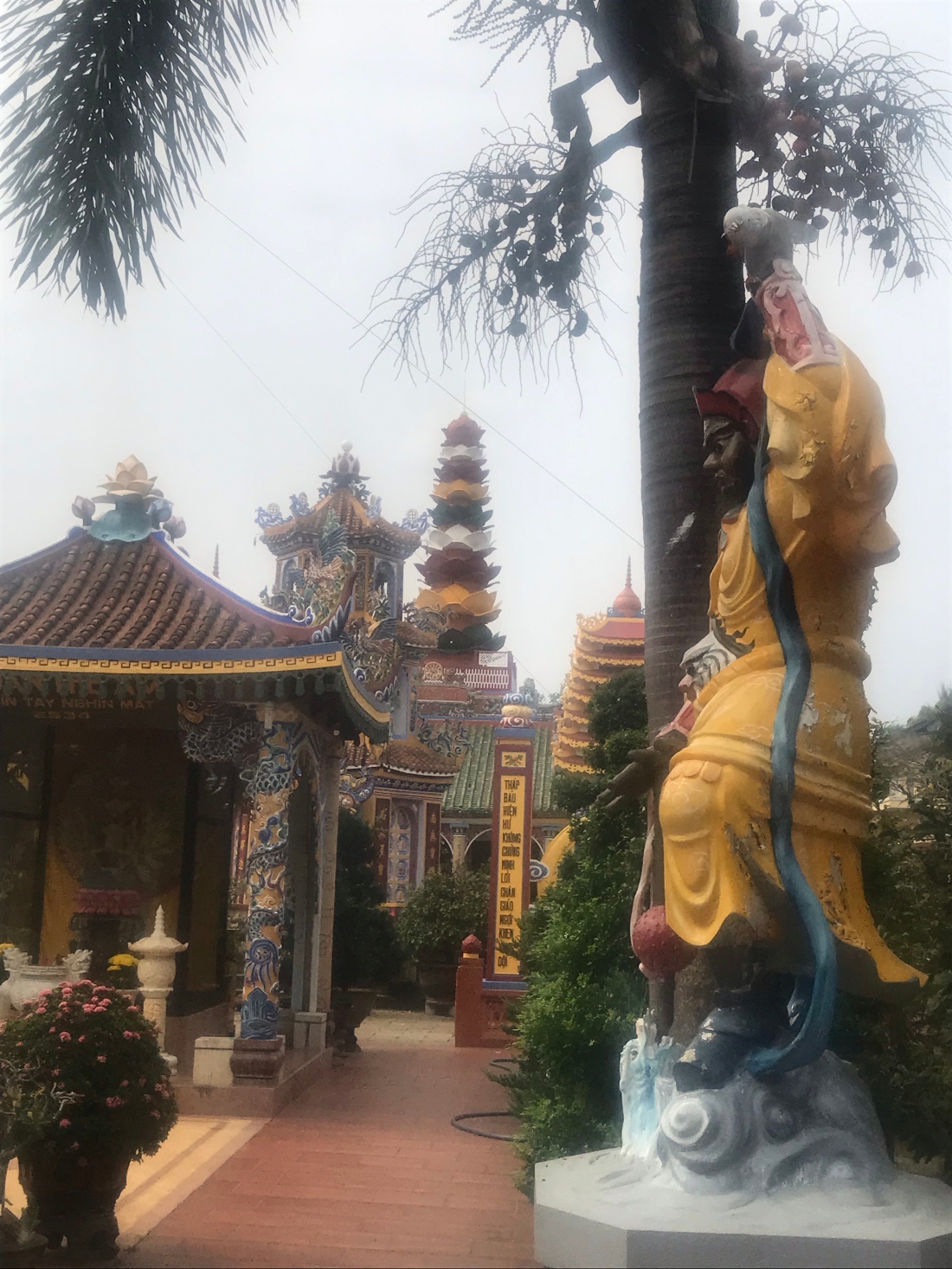 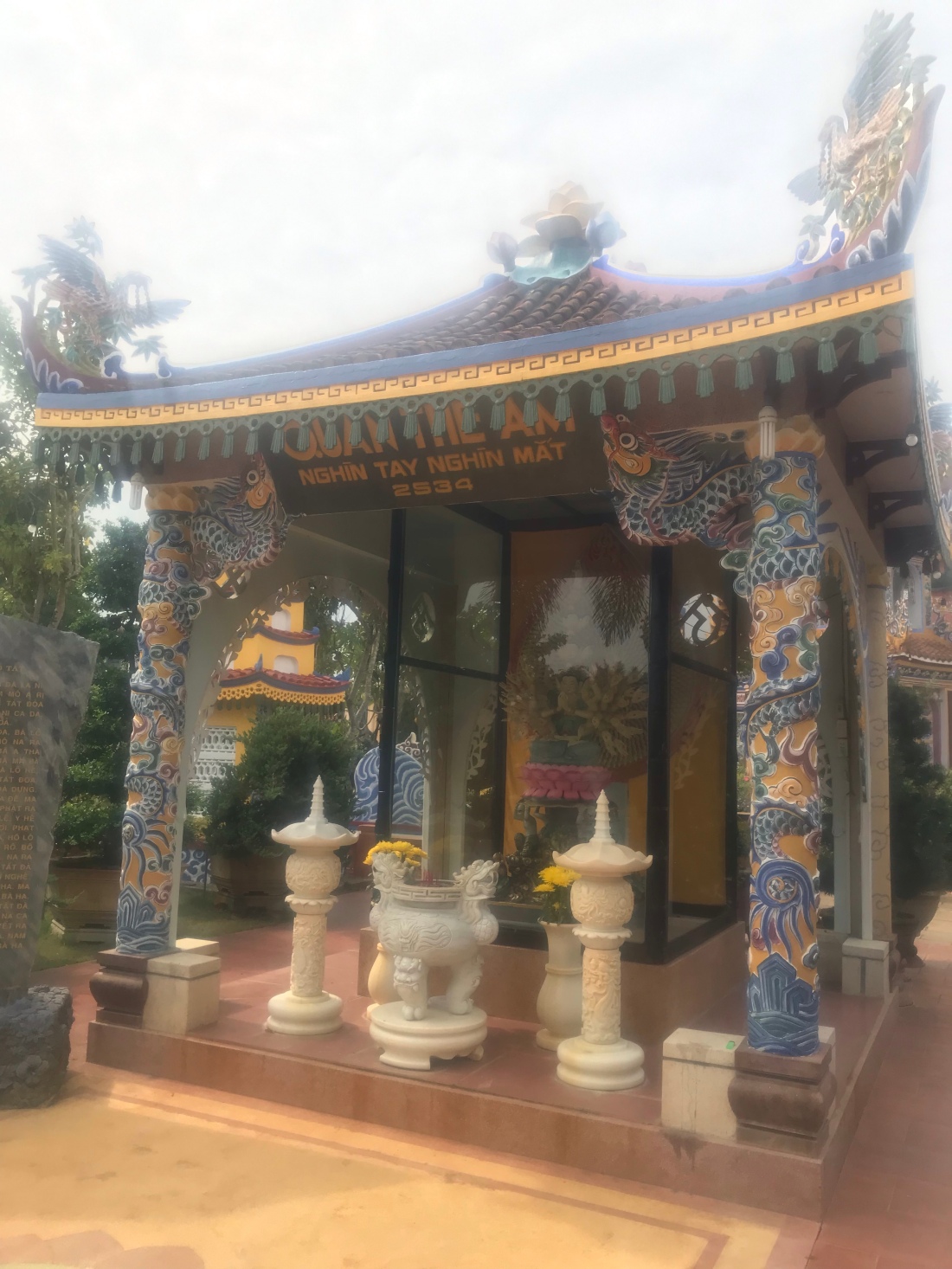 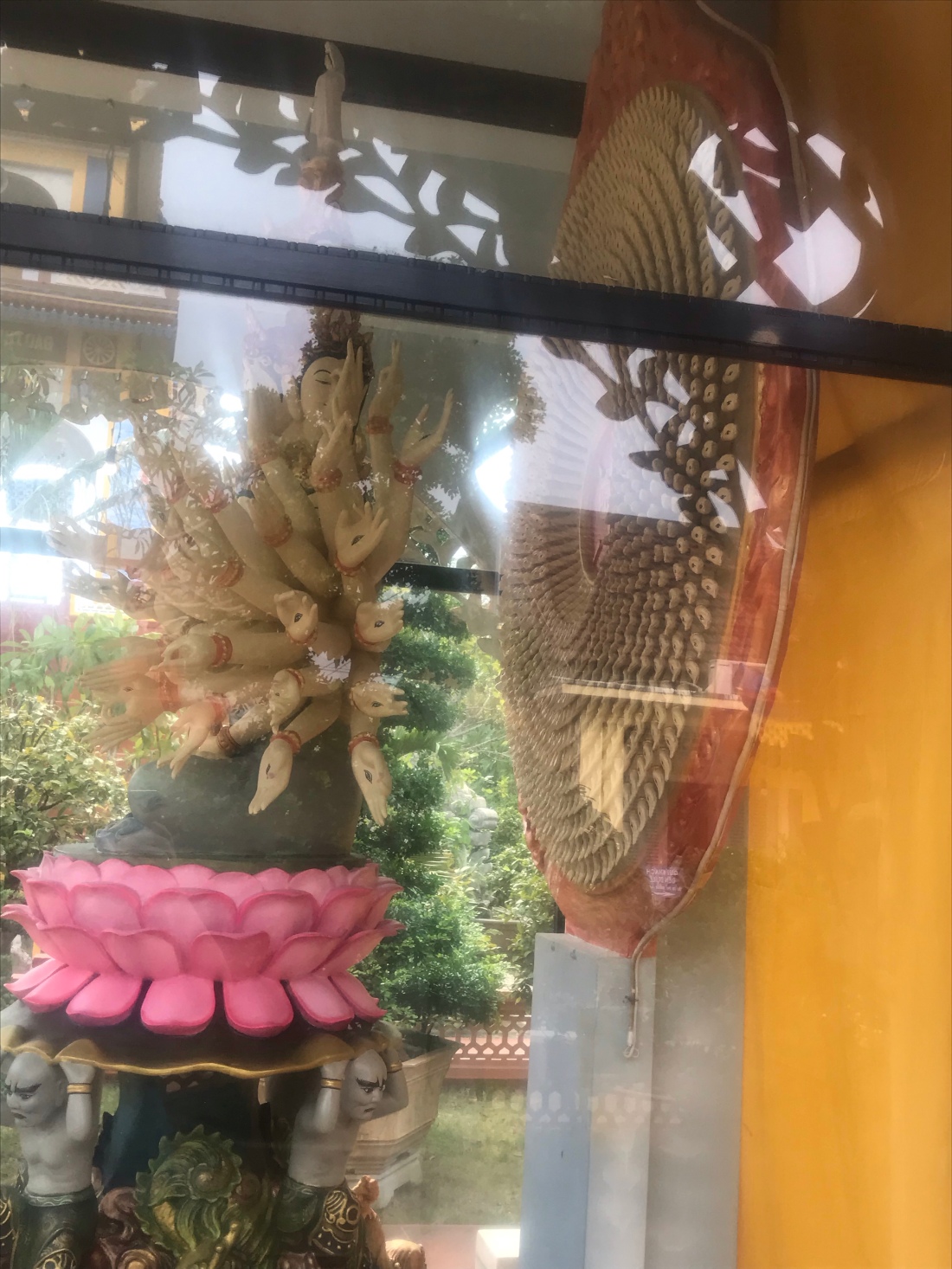 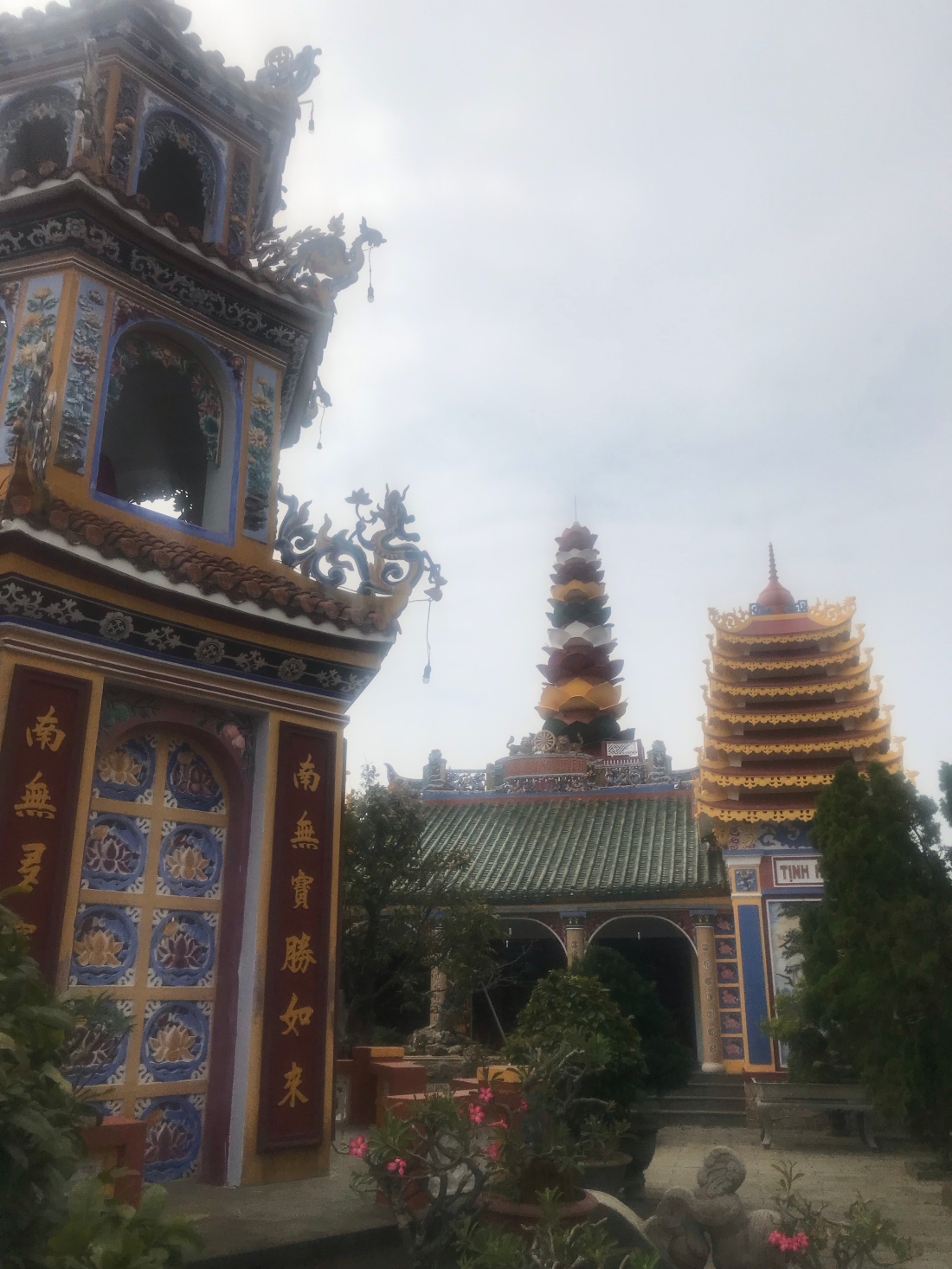 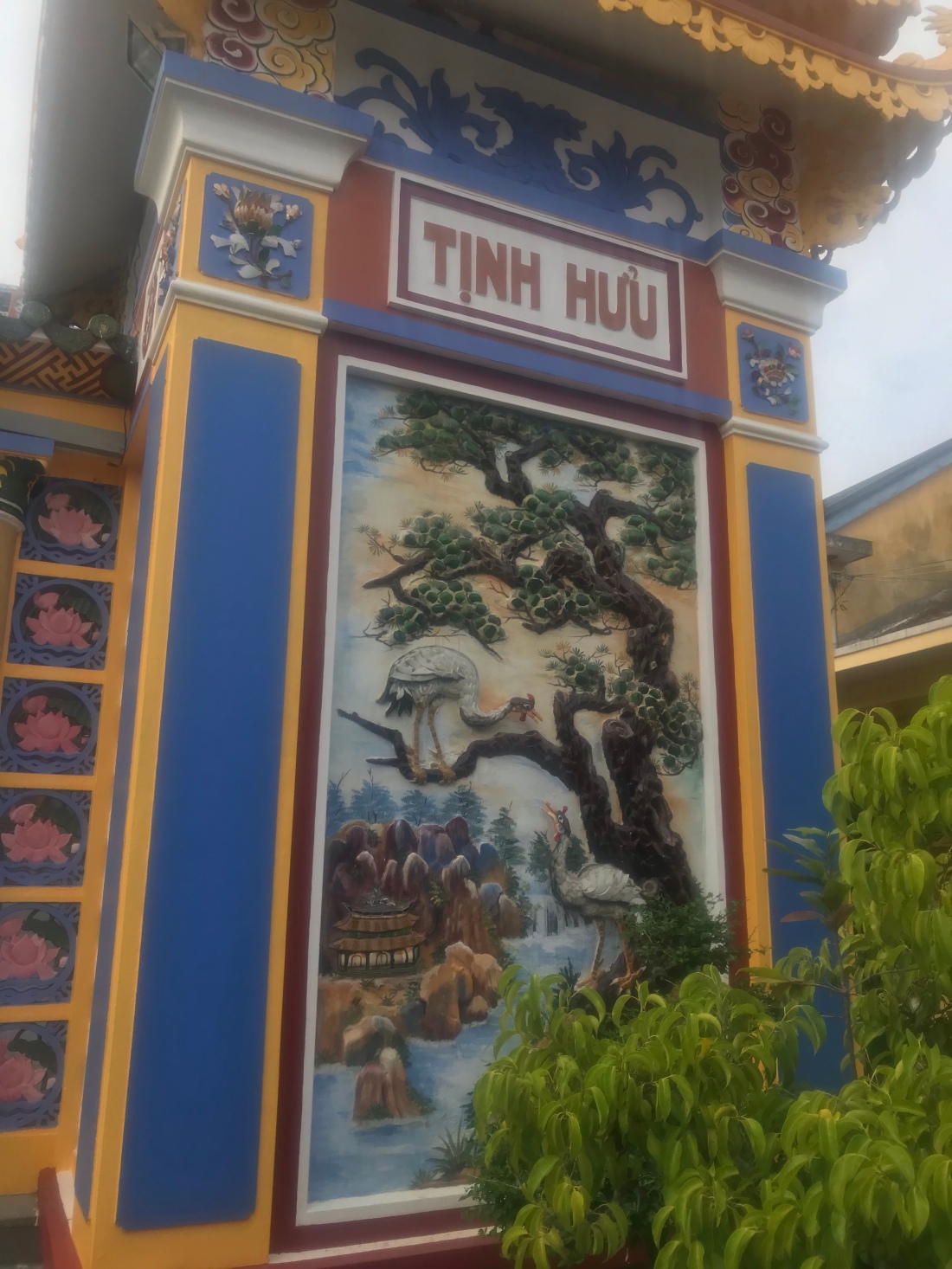 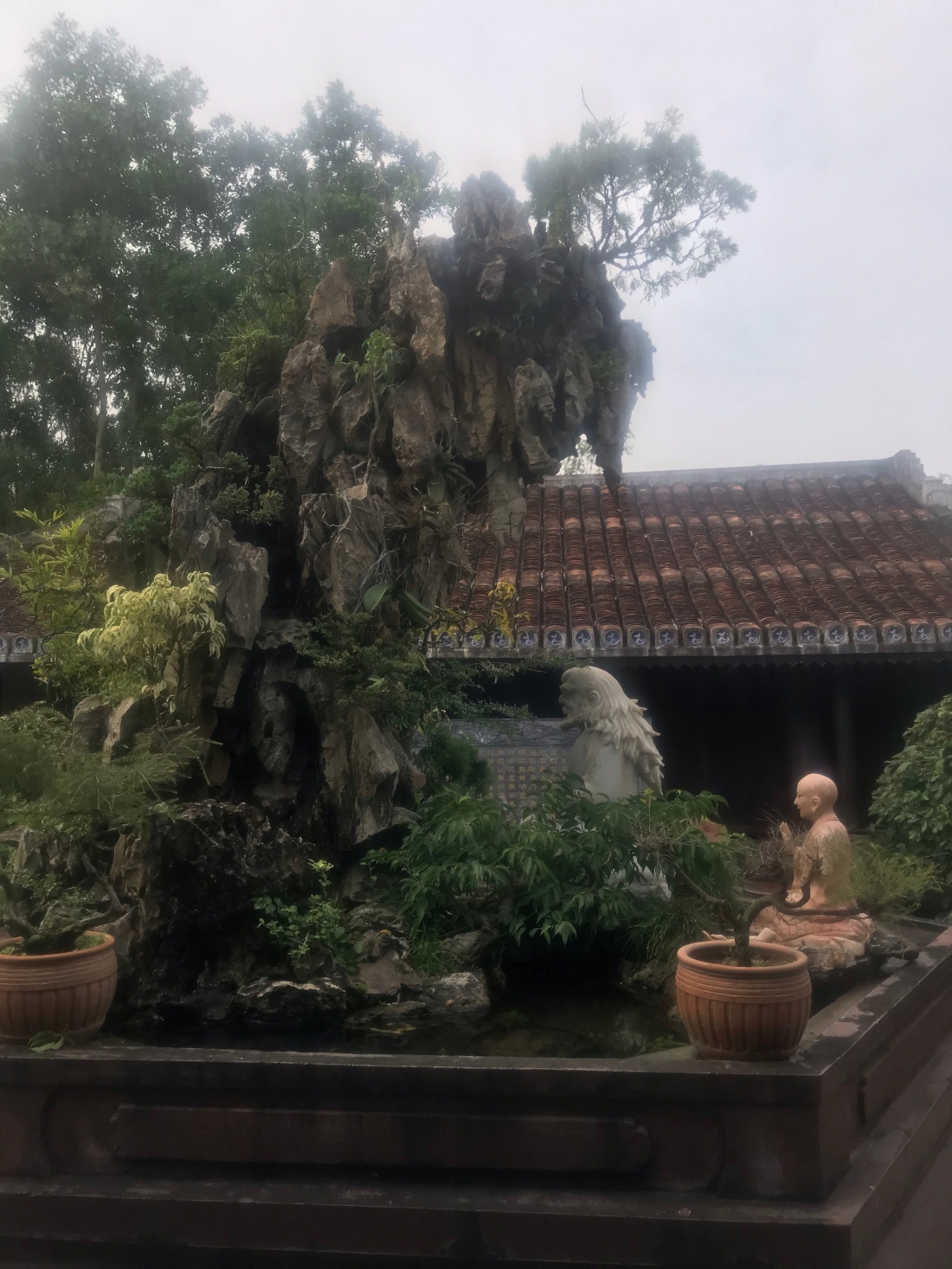 I don’t know if anyone can tell me about the story behind this piece…?

In between all the other things, Hoang told me about local beliefs and about the tradition of ancestor worship, which is very important in Vietnamese culture still. People believe that if you don’t worship your ancestors and provide a good grave for them they will cause you problems.

In Vietnamese culture, you build a temple (maybe a miniature one in your home, and contribute money also to a big community temple locally) and offer sweet things and also burn items to offer them to your ancestors. Hoang explained that people think their ancestors now live in another world beyond ours, but that they still need all the things we need in this world. He mentioned that people will even burn a motorbike to offer it to their ancestors, but usually with such big things it is a paper picture of it rather than the object itself. Apparently, the government is trying to discourage this practice as it is costing the economy a lot as people spend so much money in this way.

All in all this was a fascinating morning and start to my afternoon. And Hoang is a very safe motorbike driver. So that was a relief!