Right, so… the South Island of New Zealand is a truly awesome place. I’ll do my best to give you a little insight into it.

On our first night, we stayed in Blenheim, a rather well to do kind of place (as you might expect if you’re from the UK, where this is the name of one of the royal residences).

Our motel was very close to the immaculately cultivated little park, and soon after we arrived, I had to venture out, as we heard the last post being played with a beautiful tone, apparently in the park. I’m not quite sure how they managed this but it was actually a recording rather than a live player. Apparently the musician himself does come and play it live every so often, but most days it’s just a recording. I’m not sure why it’s played every day there, but it was kind of lovely to hear it.

The next day, we set off across the island to the west coast. To begin with, we passed through the famous Marlborough wine producing area, with vineyards lining the route. The rows upon rows of planted vines often have rose bushes planted at the end to attract unwanted insects and also to look lovely. And there are windmills scattered throughout the vineyards, which work to keep the air circulating and stop the frost from damaging them in cold weather.

The road climbed gradually, until we began to see snowy topped mountains. We had reached alpine country. We stopped off at a village called St Arnaud on the banks of Lake Rotoiti. In the local café, as with cafés throughout New Zealand, they served a diverse and immaculately formed variety of coffees (often, as in this case with a little jaffa on the side – an orange chocolate covered in red candy), along with some delicious, freshly baked scones and muffins. I really don’t know how such remote places manage to always have a warm scone or muffin on offer that tastes like they just brought it out of the oven, whatever time of day you arrive!

In the café, there was a poster of the lake, surrounded by mountains. I started to wonder aloud whether I might swim in it. My aunt and uncle looked bemused and a bit surprised at the idea, but an older guy with what looked like a permanent grin plastered on his face and a healthy glow to his skin who was another café customer told us he went swimming in the lake every morning. Encouraged by his example, I decided on the spot to do it.

When we got down to the lake side, the toilets and changing facilities were second to none, and sparklingly clean. (I don’t think many people had used them for a while, though, to be fair! Spring is not the warmest time of year anywhere in New Zealand, but particularly not in alpine country!)

The view from the still crystal clear waters of the lake was awesome, and my dip was most refreshing, I must say. When faced with this view, how could I not plunge into it?

From Lake Rotoiti, we continued on towards the West coast. I finally started to look at my “Maps Me” app, which several seasoned travellers had recommended to me. It maps your location using GPS, so you can use it without being online or within the reach of WiFi. At one point, I saw the Buller Creek “swing bridge” ahead of us on the same road. So I asked Ken and Les whether we might go over it, naïvely thinking it was some bridge the road went over or something. Les said, “Do you want to go over it?” To which I replied “OK, why not?” How innocent I was.

The Buller Gorge swing bridge is one of many such bridges in the South Island that you walk over (you really wouldn’t want to drive over one!). It happens to be the longest one in New Zealand, too. Strung precariously over a steep gorge with a raging torrent roaring beneath it. They get you to pay your $10 to go over it before you can really see it. And with good reason! (To be fair they did explain the gist, and gave what, on reflection, was some pretty scary advice; “If you feel scared just walk faster and don’t look down”, which I ignored, thinking to myself, “C’mon, how bad can it be?”) Suffice it to say that it’s called a swing bridge because it swings. And you are walking on a rigid metal mesh that you can see through all the time. If you pay a bit more, you can walk over it and zip wire back. Not on your nelly. One thing at a time. So over we went.

I am not kidding. I had to make up a song in order to get myself across. And only about halfway across did it occur to me that, having made it across, I would have to repeat the experience in order to get back. Not the sharpest knife in the drawer, me! The thought also occurred to me that someone should be paying me to go over this, not the other way round! The song went something like this: “Somewhere…somewhere inside is a Maori warrior” (repeat, add infinitum). Well, it got me across. And back. Just about!

On the far side of the bridge there’s a short bushwalk you can do, which was quite effective at calming my nerves to face the bridge back. The markers on this tree show you how deep the river has been in recent years. It’s difficult to get your head around just how much rainfall the South Island has, and how quickly rivers become deep raging torrents, but here’s a starter for ten, with my uncle providing a bit of scale. Bear in mind that he’s standing on a riverbank about maybe 15 feet above where the water level was at the time:

Having traversed the bridge safely back to the car, we continued our journey. We were driving along increasingly narrow and winding roads on the side of hills with steep valleys and gorges dropping away on one side or another, with lush greenery pretty much everywhere.

The further we went on these remote roads, meeting very little traffic, the more I began to wonder what Westport would be like. My friends moved there from Christchurch less than a year ago, and we were going to stay with them for a couple of days. I found it hard to believe that anyone could live somewhere so remote, that required so many miles of windy road to get to them.

Then we arrived in Westport, which was really a surprisingly normal sort of town, considering how remote it is. Because of its location, it does have a surprising number of shops selling stuff that I’d normally expect only in a bigger city. As we arrived in the late afternoon, the sun was up, so we went for a walk to a local beach with my friends and their children.

On the way to the beach, we walked past numerous people fishing for whitebait. The white planks of wood are put under the water close to shore so that people can see these tiny translucent fish as hey swim past, and then scoop them up into their nets. 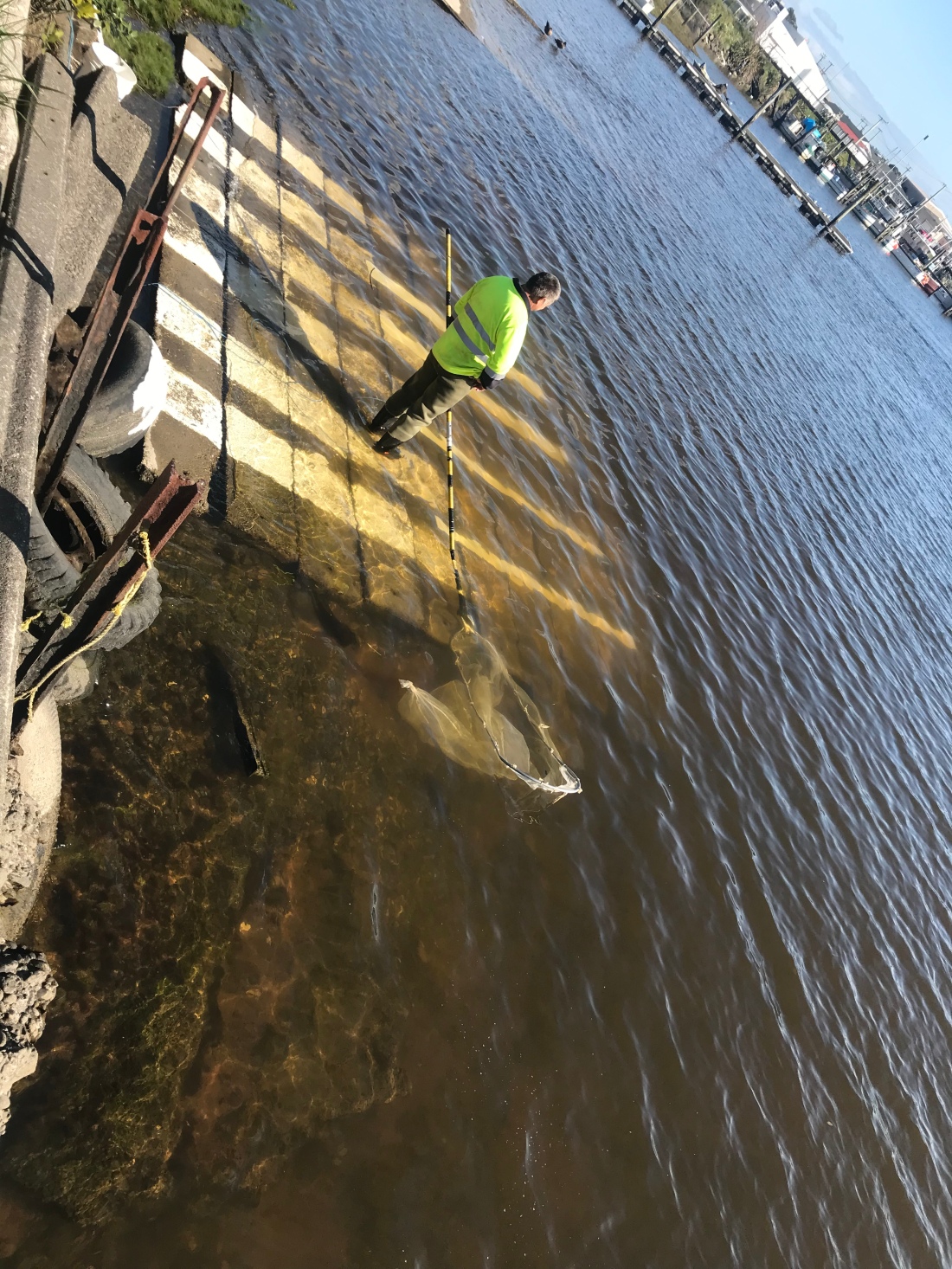 Having arrived at the beach, the children all braved the chilly sea in their wetsuits, while my friend Jacqui miraculously produced a tub of ice cream and cones for us to enjoy in the sun. Lovely! 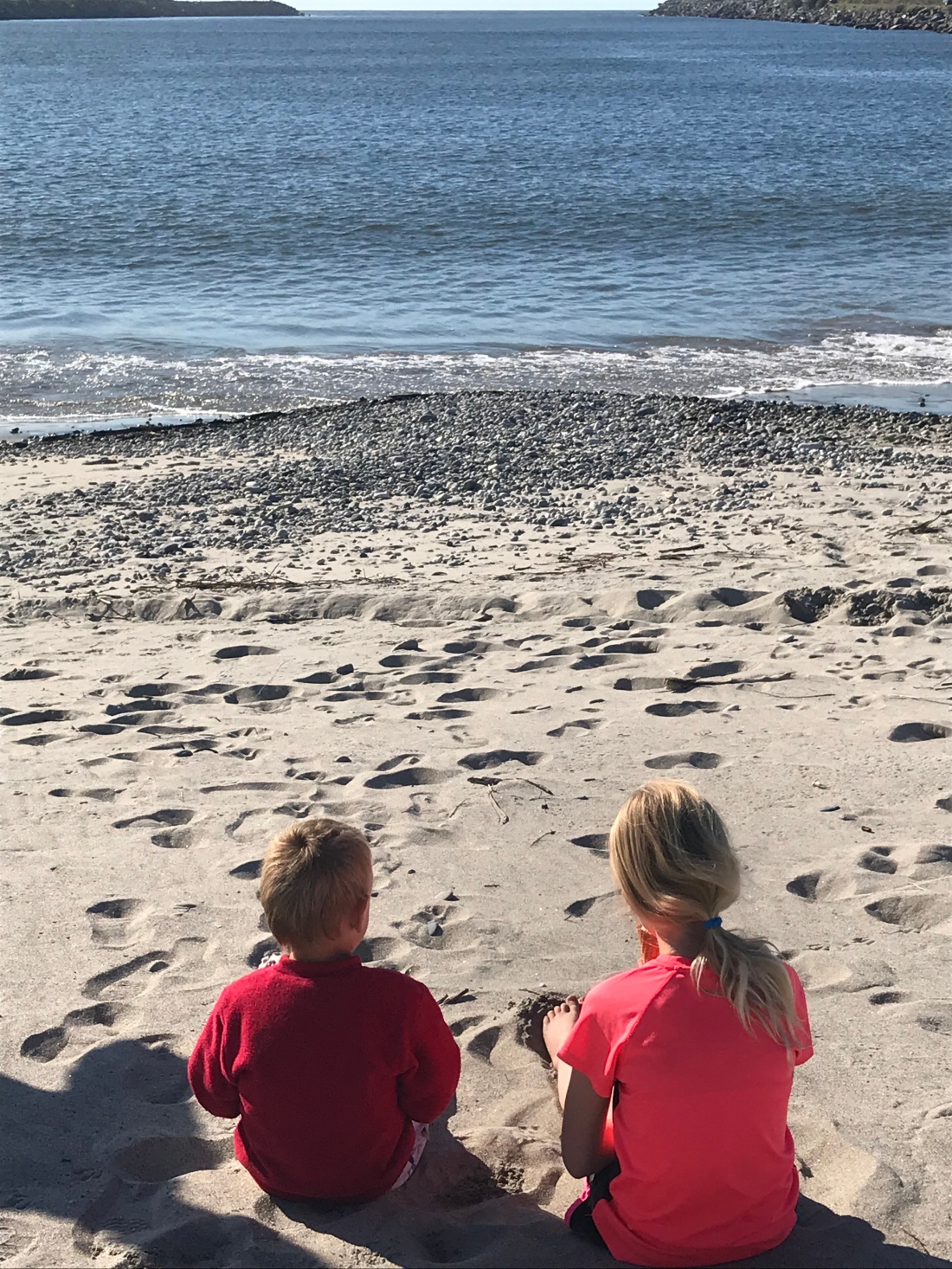 4 thoughts on “Blenheim to Westport”